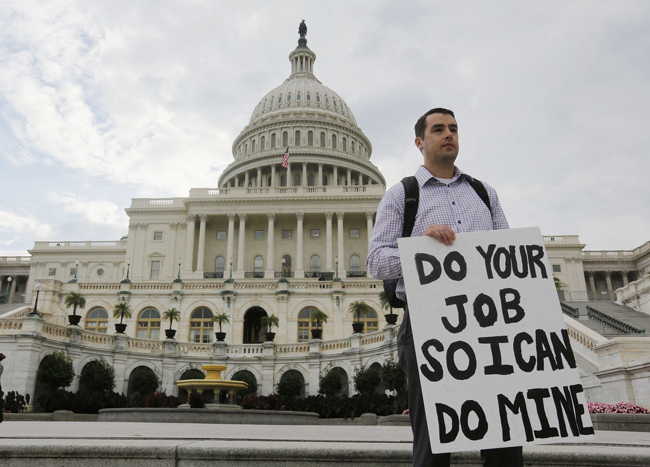 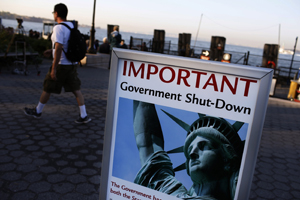 WASHINGTON (CNS) — Anticipating the worst, religious leaders gathered the day before the federal government shut down to denounce what they called “political brinkmanship.”

“Shutting down the government will do real damage,” said the Rev. David Beckmann, a Lutheran minister and president of the Christian citizens’ anti-hunger lobby Bread for the World, at a Sept. 30 news conference. “Risking our nation’s creditworthiness will do even more damage. Most clearly, the disruption and uncertainty will put the brakes on our economy.”

The chairmen of three committees of the U.S. bishops weighed in Oct. 1, saying in a joint letter to Congress: “A just framework for future budgets cannot rely on disproportionate cuts in essential services to poor persons. It requires shared sacrifice by all, including raising adequate revenues, eliminating unnecessary military and other spending, and addressing the long-term costs of health insurance and retirement programs fairly.”

The government shut down its nonessential operations Oct. 1, the start of a new federal fiscal year, furloughing hundreds of thousands of workers. At issue is a dispute between the Republican-controlled house and the Democratic-run Senate.

The House has sought to defund or delay the Affordable Care Act as a condition for letting the government continue to operate. The Senate has voted down House bills to that effect. President Barack Obama, a Democrat, has said he would veto any bill that defunded or delayed the health care reform law, which passed in 2010.

The budget battle is seen as a precursor to a second fiscal fight with potentially far-reaching consequences: the federal government’s ability to borrow money, which is scheduled to run out Oct. 17. Without an increase in the federal debt limit, no one can predict precisely what would happen, but many fear that financial markets will tremble and smaller national economies could also quiver.

A list purporting to contain Republican demands for increasing the debt limit was leaked in late September. It includes items such as suspension of the debt limit until December 2014; one-year delay in implementing the health care law; tax reforms and mandatory spending reforms; and energy and regulator reforms.

Obama said Sept. 27 he would not negotiate on “the full faith and credit of the United States.”

“The Catechism of the Catholic Church unambiguously states it is the proper role of government to ‘make accessible to each what is needed to lead a truly human life: food, clothing, health, work, education and culture, suitable information, the right to establish a family, and so on,'” said the bishops in their letter.

“Throughout the world, millions rely on the United States for lifesaving food, medicine, and support. In Syria, violence seriously threatens the lives of two million refugees and four million internally displaced persons, half of them children. Over 5 million receive HIV/AIDS medication as a result of PEPFAR, and thousands of children receive vaccinations. This work must continue, and human needs must be met,” they said.

Rev. Beckmann said at the Sept. 30 press conference that the faith leaders have been careful not to side with any one party, but “in fact, the tea party caucus is mainly responsible for our political dysfunction.”

A Sept. 27 letter from the leaders to lawmakers was made public at the Sept. 30 news conference. It was signed by 33 religious leaders, including eight Catholics.

“Our democracy rests on principles of reason, compromise, and a commitment to the common good,” the letter said.

“To hold our governance processes and financial credibility hostage to narrow priorities is not only dangerous to the nation’s near term financial being, it threatens the very foundations of our democratic process and our capacity to live united. We ask that congressional leadership of both parties stand strong in opposing efforts to allow the will of the few to threaten the common good.”

The federal budget, the letter added, “belongs to every American. This common fund formed of our combined tax revenues is designed to support the shared infrastructure, well-being, and long-term ethical values of our society. As people of faith we find it morally irresponsible to blockade the process by which we provide for our nation’s shared needs in a bid to force any individual legislative priority.”