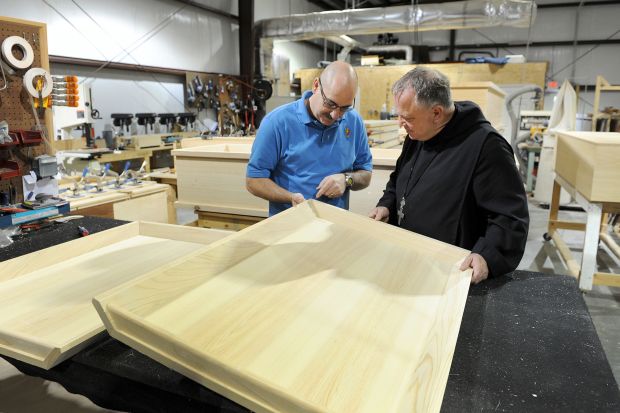 By declining to review a lower court’s ruling, the high court Oct. 15 left standing what Benedictine Abbot Justin Brown has known in his heart for the past six years: The Benedictine monks of St. Joseph Abbey in Covington are not breaking the law by handcrafting plain cypress caskets and selling them to Louisiana residents.

Without comment, the court declined to hear an appeal of a ruling from earlier this year by the 5th U.S. Circuit Court of Appeals in New Orleans, giving the monks a victory in their legal wrangling with the Louisiana State Board of Embalmers and Funeral Homes.

For many years, the monks had made the simple caskets to bury members of their religious community. They received regular requests for the caskets from people outside their community, but a decades-old state law protecting the funeral home industry required anyone selling a casket in Louisiana to be a licensed funeral home director.

The monks tried to amend the law by lobbying the state Legislature, but a bill that would have allowed them to sell their caskets got out of a Senate committee only once and was voted down by the full body.

That’s when the monks decided to press their case in federal court, and the nonprofit Institute for Justice in Washington, which represents entities in cases of governmental overreach, took the case on a pro-bono basis. The monks won a huge victory in 2011 when U.S. District Judge Stanwood Duval ruled the state law unconstitutional, allowing the monks to sell their caskets.

Still, the funeral home association pressed its case with the federal appeals court, which affirmed the lower court, and then with the Supreme Court.

“It’s more of a heart thing,” Abbot Justin said. “We didn’t quite understand all the legal ramifications when we started this, but we certainly felt it was a common-sense thing that something was wrong with this law. It affected our ability to simply sell our caskets to someone who wanted to buy them.” 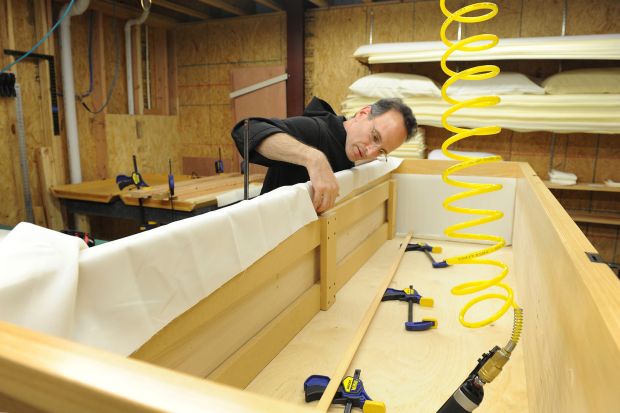 A monk lays out and attaches the inner lining to a casket during the manufacturing process at St. Joseph Abbey in St. Benedict, La., in 2008. (CNS photo/Frank J. Methe, Clarion Herald)

Abbot Justin said many funeral home directors in the area understood the monks’ motivation and have been gracious in dealing with them despite the legal case.

“We really never intended to be in any kind of fight or adversarial relationship with the funeral directors,” Abbot Justin said. “But as we went into the case more and more, it became clear that according to the constitution we did have a right to free enterprise and that the regulations in this case were not well grounded because of the fact that there were no health and safety issues. In fact, Louisiana doesn’t even require caskets for burial.

“All of those things added up in our minds that we really ought to continue fighting this. It became clear that we were fighting not only for ourselves but for other people like us who encounter these kinds of regulations and keep them from going into business or to make an honest living.”

The state funeral home association threatened the monks with hefty fines and a “cease and desist” letter after a 2007 story in the Clarion Herald, New Orleans archdiocesan newspaper, detailed their casket-making operation. After several years of trying unsuccessfully to amend the law, the monks found legal help through the Institute for Justice.

“If it hadn’t been for the Institute for Justice, we couldn’t have pursued this case,” Benedictine Abbot Justin Brown said. “We really have a lot to be grateful for. They certainly supported the idea of upholding the constitution and individual liberties.”

Deacon Mark Coudrain, who runs St. Joseph Abbey Woodworks on the abbey grounds, said the monks deliver about 20 caskets per month. They make two models: one selling for $1,500 and another for $2,000. The money is used to support the abbey’s operations.

A special aspect of the casket-making operation, Deacon Coudrain said, is that the monks and the volunteers who help them regularly pray for the families who will use the caskets in the future. He said the positive publicity resulting from the legal fight — which went viral — “doubled” casket sales.

“It’s been very, very consistent,” Deacon Coudrain said. “Now we can begin to think about advertising and things like that. We have gotten a lot of support, even from funeral home directors, who thought this was an unjust law.”

Deacon Coudrain recently participated in a nationwide television show in New York with John Stossel, who interviewed small-business people who felt they were being unfairly regulated by the government. In addition to the monks’ casket-making operation, Stossel interviewed “Marty the Magician,” whose act includes pulling a rabbit out of his hat.

“The U.S. Department of Agriculture said he has to do an evacuation plan for the rabbit,” Deacon Coudrain said. “If he leaves town with the rabbit, he has to file paperwork. They have the right, 24 hours a day, to check on the rabbit without telling him. He couldn’t bring the rabbit to New York because there was so much paperwork.”

Deacon Coudrain made Marty the Magician an offer he couldn’t refuse.

“I told him when the rabbit dies, we’ll make his casket for him,” Deacon Coudrain said. “It may not be legal, but we’ll do it anyways.”

PREVIOUS: Call to ‘ask not …’ still resonates in commitment to public service

NEXT: Gov. Christie drops appeal of ruling to allow same-sex marriage in N.J.