Some faith-based contractors using own funds during federal shutdown 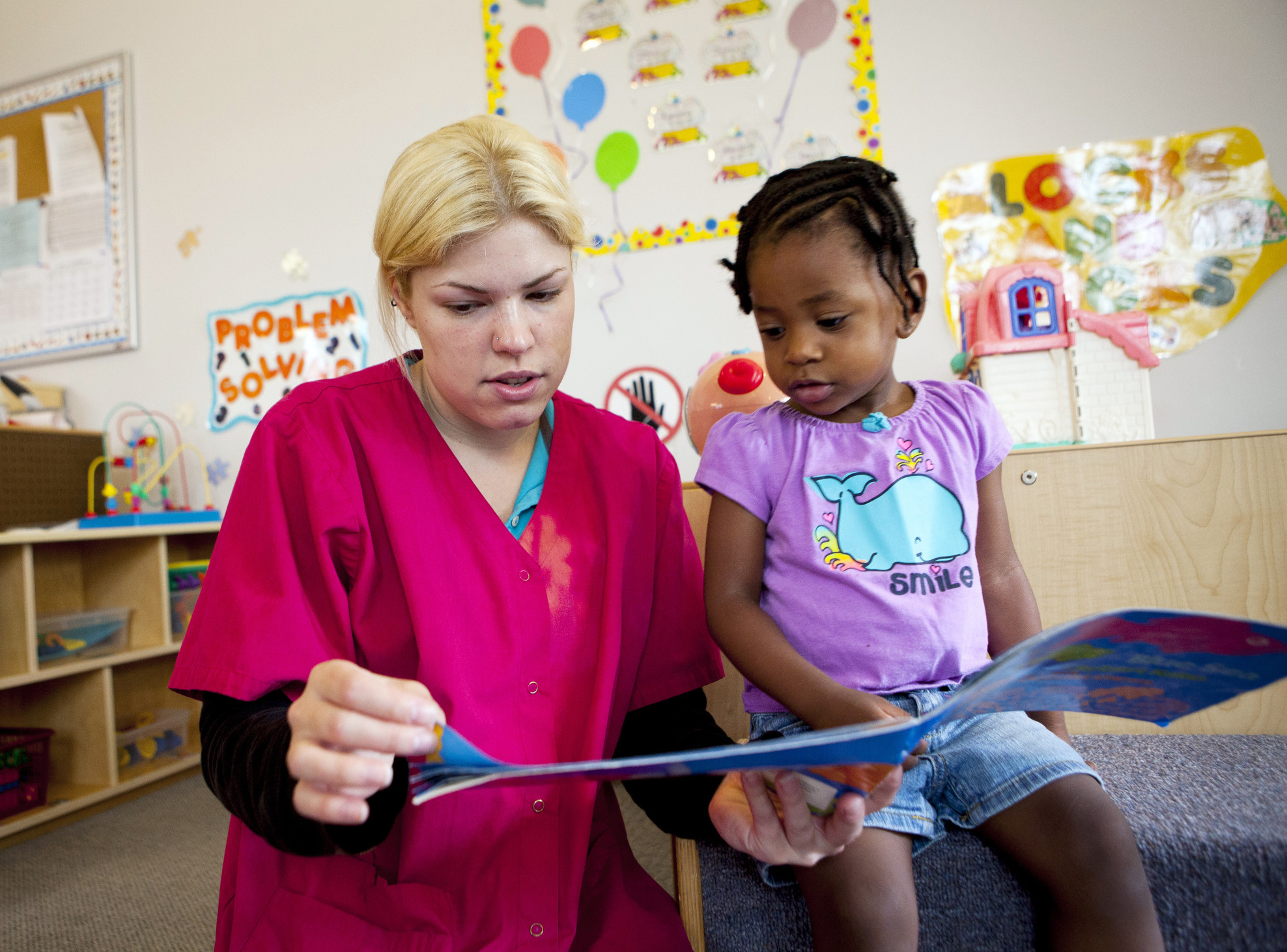 A teaching assistant reads with a girl at the Baltimore Catholic Charities Head Start program in Edgewood, Md., in this June 13 file photo. Although the Edgewood program remains open, other Head Start sites have felt the effects of the government funding crisis and budget cuts, impacting nearly 19,000 children across the nation. (CNS photo/Nancy Phelan Wiechec)

WASHINGTON (CNS) — Social Security, food stamp and Medicare benefits continued, but the federal government shutdown over a congressional budget impasse was putting other aid and nutrition programs at risk and forcing some faith-based contractors to use their own funds to keep them operating.

On the second day of the partial shutdown that began Oct. 1 with the start of the fiscal year, President Barack Obama had summoned congressional leaders to the White House to work on an agreement to get federal agencies functioning again.

While the visuals of closed national monuments and parks kept those effects in the forefront of the news, around the country thousands of organizations with less picturesque venues were digging into reserves to continue to provide Head Start programs or food vouchers for children.

The Women, Infants and Children nutrition program, or WIC, which gives vouchers for baby formula and food to poor pregnant women and families, was closing to new applicants in Utah, while in Wisconsin and the District of Columbia, program managers said they could keep it going on reserves for a few weeks, perhaps.

Head Start, the preschool program, also was subject to mixed responses by jurisdiction, depending upon the exact date at which their vouchers from the government expire. Grants are issued for Head Start on a staggered basis throughout the year.

Some Head Start programs were initially able to remain open, but they anticipated having to close if the shutdown went on for very long.

A statement from the National Head Start Association said Oct. 1 that 19,000 children were left without classes as 23 programs in 11 states closed. The statement by Yasmina Vinci, the executive director, said the shutdown comes on the heels of “devastating sequester cuts which closed windows of opportunity for more than 57,000 at-risk children who lost their Head Start slots.”

The statement told of a Head Start program in Massachusetts that was forced by the sequester to start their school year a month later than normal, opening Sept. 30, only to face possible closure again the next day because their funding stopped.

“This abdication of responsibility by Congress and leaders in Washington has further displaced the at-risk children already reeling from sequester,” Vinci’s statement said. “Government shutdown is one cut atop an already deep wound.”

In Kansas, the Wichita Eagle newspaper reported that shelters for homeless families and for battered women and children, a foster grandparent program and a “Marriage for Keeps” program for struggling families, which are run by Catholic Charities of the Diocese of Wichita, would remain open for now, with the diocese picking up the costs normally covered by federal grants.

Johnny Young, director of Migration and Refugee Services for the U.S. Conference of Catholic Bishops, told Catholic News Service that federal contracts to help resettle refugees and provide other assistance to immigrants were held up by the government freeze.

Work for those beneficiaries doesn’t stop, however, said Young. “We have targets given by the different government offices involved.”

Although there’s no money coming in, MRS will use funds from the USCCB to continue to provide services, he said.

“Because of the generosity of American Catholics, we can do that,” Young said, adding that such subsidies could go on for perhaps a couple of months.

On Oct. 2, a long list of Catholic and other Christian leaders signed onto a statement decrying the shutdown.

“As Christians and citizens, we are appalled that elected officials are pursuing an extreme ideological agenda at the expense of the working poor and vulnerable families,” said the statement released by the organization Faith in Public Life.

“We especially challenge those members of Congress who call themselves pro-life to cease their political posturing on Capitol Hill. Shutting down the government in a futile effort to defund or delay the Affordable Care Act will hurt low-income pregnant women and infants who receive vital nutrition support,” it said, referring to WIC.

“There is nothing ‘pro-life’ or Christian about taking food away from pregnant women and babies. It is hypocritical and shameful for those who tout their commitment to family values to show such callous indifference,” they said.

The statement noted that the shutdown will hurt seniors who receive Meals on Wheels as well as federal employees who will “be locked out of their workplaces without pay as bills pile up. This failure of political leadership and responsible governance exposes our nation’s misplaced values.

“Struggling families, seniors and pregnant women don’t deserve to be victims of a manufactured crisis in Washington,” the statement concluded.

Signers included two former ambassadors to the Holy See, Thomas Melady and Miguel Diaz; leaders of the Leadership Conference of Women Religious, the Sisters of Mercy of the Americas and the Conference of Major Superiors of Men; representatives of several Franciscan organizations and many Jesuit institutions.

Others included: the Rev. Jim Wallis, director of Sojourners; Franciscan Sister Margaret Carney, president of St. Bonaventure University and chair of the board of the Association of Catholic Colleges and Universities; faculty members of two dozen universities both Catholic and of other denominations; Timothy Collins, retired director of the Catholic Campaign for Human Development; and Francis X. Doyle, retired associate general secretary of the U.S. Conference of Catholic Bishops.

Other signers were: the Rev. Cynthia Hale from Ray of Hope Christian Church in Decatur, Ga.; the Rev. Troy Jackson, director of Ohio Prophetic Voices in Cincinnati; the Rev. Richard Cizik, president of the New Evangelical Partnership for the Common Good; Noel Castellanos, CEO of the Christian Community Development Agency; and the Rev. Michael Livingston, past president of the National Council of Churches.

A day earlier, three U.S. bishops who chair USCCB committees, as well as Bread for the World, representing 33 interfaith religious leaders, released statements decrying the effects of the shutdown on the poor.