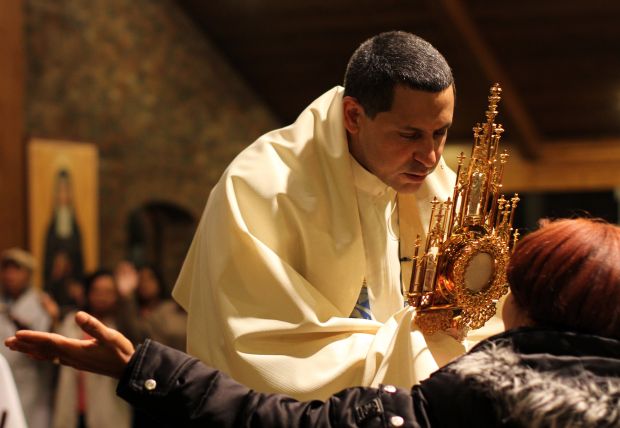 BELLE HARBOR, N.Y. (CNS) — Joyful prayers, songs and conversation could be heard along the street as the parish community of St. Francis de Sales in Belle Harbor gathered to observe the first anniversary of Hurricane Sandy.

Brooklyn Bishop Nicholas DiMarzio was the main celebrant of a special evening Mass of remembrance and thanksgiving Oct. 26.

As parishioners filled the pews, it was hard to believe a year had passed since that night when wind, water and fire ravaged their homes and community. Some are rebuilding or have already done so. Many are determined to return. Others may never come back.

Looking upon the congregation, Bishop DiMarzio recalled the tragedies that had befallen them over the last 12 years — from the lives lost in the 9/11 attacks and the November 2001 crash of American Airlines Flight 587 shortly after takeoff from New York’s Kennedy International Airport, to last year’s hurricane.

Despite significant water damage from Hurricane Sandy in the parish school and convent, the church served as a recovery center, meeting the basic needs of thousands of residents who lost everything from heat and hot water to entire homes.

The bishop asked how one community could be so resilient, and he offered this answer: “You’ve kept the faith.”

He credited former pastors, Msgr. Martin Geraghty and Msgr. John Brown, with sustaining faith in the community, and expressed confidence in the new pastor, Father Thomas Doyle, and his ability to serve this beach community. Bishop DiMarzio installed Father Doyle as pastor during the Mass.

Noting how appropriate it was that themes of consolation, poverty, humility and hope were weaved through the day’s readings, the bishop assured the faithful that, as the responsorial psalm said, “God hears the cry of the poor.”

“I’ve run the race. I’ve kept the faith,” the bishop said, repeating the words of St. Paul to Timothy in the second reading. “How much is that a message for the people of Belle Harbor? You’ve kept the faith and it’s been a tough race in many ways.”

He added that St. Paul states that the crown of righteousness awaits those who continue to profess the faith, to live the faith.

“That is truly the message today … that by being people of faith you receive the reward that comes. How important it is that we seek faith as something to sustain us. It is a gift … and it sustains us in the difficult times in life.”

Faith is what carried parishioner Mary Bunyan through the past year.

Hours before the storm hit, she and her family left their house, which is right next to the parish school, and went to her mother’s home in the nearby Brooklyn neighborhood of Marine Park.. They didn’t take anything with them — not even jackets.

The next morning, a neighbor called and said everything was gone. Beams and ashes were all that was left of their home, which had caught fire the previous evening.

When she and her husband arrived where their home once stood, Msgr. Brown and Sister Patricia Ann Chelius, a Sister of St. Joseph, who lives in the parish convent, were there with hugs and words of support.

“When you see 29 years of your life in ashes, it’s heartbreaking. It’s not just the house, but all of the memories of my children,” Bunyan told The Tablet, Brooklyn’s diocesan newspaper. “I wasn’t able to retrieve one photo. … But my family is OK, so I’m OK.”

The family rented an apartment in Brooklyn and lived there until two weeks ago when they rented a place in Belle Harbor.

“I got nothing from FEMA and only about 70 percent of my insurance policy,” she said, referring to the Federal Emergency Management Agency. She registered for the NYC Build it Back program and plans to rebuild her home in the coming months.

Through it all, she said, she continued to attend weekly Mass at her parish because it was the one constant in her life.

“It’s like a year dropped out of people’s lives,” said Sister Patricia Ann.

On the night of the storm, she saw flames rising from the Bunyan home from the convent’s kitchen window. She prayed for their safety and that of her other neighbors.

As water filled her own basement, she and the two Sisters of St. Joseph with whom she lived had to decide if they’d stay or find refuge elsewhere.

“I said, ‘I’d rather die in the water than in the fire,'” she recalled.

The sisters were spared — but the convent and parish school suffered damages. The sisters were displaced to a convent in Hempstead on Long Island, and the school was relocated to the former SS. Simon and Jude School in the Gravesend area of Brooklyn. Both buildings were refurbished and put back in use earlier this year.

“The school now has over 520 students and there are 400 in the religious education program,” Father Doyle said.

He said the school planned to mark the storm’s anniversary with a special program, which the students titled, “Unbreakable and Unstoppable.”

“That’s the kind of resilience I’ve found here,” Father Doyle said. “The process of rebuilding is still slow but the spirit is upbeat.