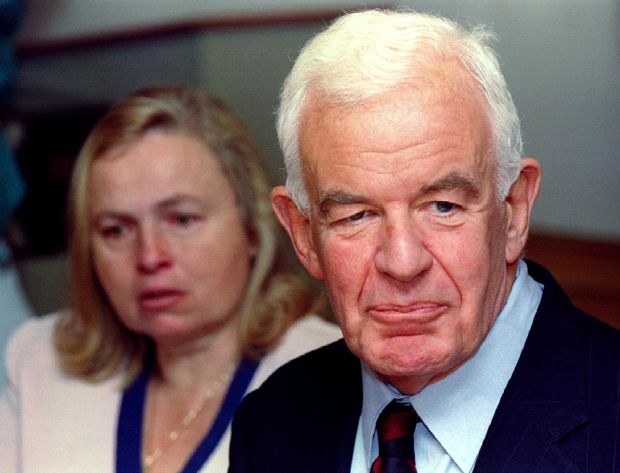 WASHINGTON (CNS) — The nation lost “a true American statesman” with the passing of Thomas S. Foley, former speaker of the House, said the president of his alma mater, Jesuit-run Gonzaga University in Spokane, Wash.

“Speaker Foley is an essential part of our university fabric and community; and he will forever be a Zag to all of us,” said Gonzaga president Thayne McCulloh in a statement issued Oct. 18, the date Foley died at his home in the nation’s capital.

Foley, 84, a Democrat, had been in hospice care at home much of the year after suffering a stroke last December followed by pneumonia in May.

He served as House speaker from 1989 until early 1995. He was the first sitting speaker since the Civil War to lose a re-election bid, which he did in November 1994 amid the “Republican revolution.”

Foley, a Catholic, had differed with American church leaders on some issues, most notably abortion. At one point, frustrated pro-life leaders, even after a 1991 Vatican gathering had ended, tried to read a petition aloud asking the Holy See to sanction Catholic political leaders, Foley among them, who supported legal abortion.

A Catholic News Service profile of Foley in 1989 after he was chosen speaker included a ringing endorsement from his parish priest.

“He’s a great man, we’re very proud to have him from Spokane,” said Father James Ribble, who had known Foley since 1962. “He lives in this parish” in modest quarters and has attended many church activities over the years.

“He is a man of the people,” Father Ribble told CNS at the time. “He is extraordinarily generous with his time and with his service. He’s never, ever, said no to a request I’ve made” to deliver a school commencement address or meet with local Catholic groups, Father Ribble said. “He listens. He’s warm.”

In Washington, Foley was known to take visiting priests from Spokane to the House dining room or on special tours. “He’s everything he advertises to be,” Father Ribble continued, “he’s filled with honesty, integrity, committed to public service. … He gives you a straight answer. He does not tell you what he thinks you want to hear. And if he doesn’t know, he tells you.”

After graduating from Gonzaga, Foley returned to the university to teach at its law school, as had his father. In 1992, Foley spearheaded the construction of a university library, which was named after his parents.

While Foley’s votes on abortion did not reflect the church’s opposition to it, he sided with the church more often than not on such issues as capital punishment, food and nutrition, housing, discrimination, nuclear weapons and chemical weapon production.

During his tenure as speaker, he helped shepherd passage of budget and spending deals in 1990 and again in 1993 that called for tax increases. He also helped win passage in 1994 of a ban on assault weapons. He also supported the North American Free Trade Agreement.

John Carr, who headed the bishops’ domestic and international policy efforts at the time of Foley’s ascent to the speakership, called Foley in 1989 a “mainline Democrat.”

Carr said, “I find him straightforward and low-key, respectful of the church’s interest and experience but not supportive of the church’s pro-life agenda.” Carr said. “He seems to be an effective inside leader with kind of a calm presence.”

“What strikes you is his steadiness, his straightforwardness and the lack of hype,” he added. “It’s a different sort of congressional style.”

Funeral services were pending at St. Aloysius Church at Gonzaga University. A memorial service for Foley will be held in Washington.

He is survived by his wife, Heather, and a sister, Maureen Latimer.