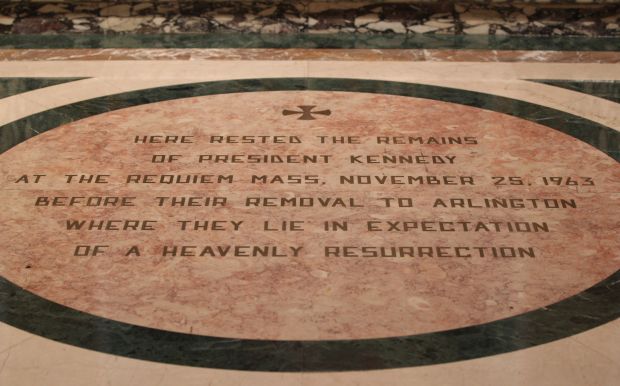 A floor marker where the casket of President John F. Kennedy rested during his funeral Mass is seen Oct. 24 at the Cathedral of St. Matthew the Apostle in Washington. It reads: "Here rested the remains of President Kennedy at the Requiem Mass, Nov. 25, 1963, before their removal to Arlington where they lie in expectation of a heavenly resurrection." (CNS photo/Bob Roller)

WASHINGTON (CNS) — On Nov. 25, 1963, a television audience of millions of people around the world prayerfully bid farewell to President John F. Kennedy, as his flag-draped coffin was placed before the sanctuary of the Cathedral of St. Matthew the Apostle in Washington, during the funeral Mass for the slain president.

Today, almost 50 years later, people come to the cathedral from across the country and around the world, with many wanting to stand at that very spot, where an inlaid marble plaque is inscribed with the words, ‘Here rested the remains of President Kennedy at the Requiem Mass, Nov. 25, 1963, before their removal to Arlington, where they lie in expectation of a heavenly resurrection.”

On a recent weekday, Msgr. W. Ronald Jameson, the cathedral’s rector, stood beside that plaque. “Many people who come here, come because of that,” he said, noting that many talk about “the sense of hope that his presidency brought the nation.”

“They see the plaque, and it brings back memories,” the priest told the Catholic Standard, newspaper of the Washington Archdiocese.

In an article in the Nov. 29, 1963, issue of the archdiocesan paper, reporter Valerie MacNees, who attended the president’s funeral, recounted the emotions of that day in spare language: “The heart of the entire world shared the grief of the American people in the loss of their president.

“An emperor, a king, a queen, princes, princesses, presidents and premiers of foreign governments joined the American people Monday in paying their last respects to President John Fitzgerald Kennedy,” she wrote.

“The great and the lowly of the world met on a common level in mourning the 46-year-old president who was slain by an assassin’s bullet last Friday in Dallas.” Kennedy was killed Nov. 22, 1963.

Thousands of people crowded the streets leading to the cathedral, including Richard Schmidt, now the archivist and historian for St. Matthew’s, who was then working as an administrative assistant for the Food and Drug Administration.

He watched as the president’s flag-draped casket was moved on a caisson drawn by six gray horses, with the Kennedy family members and U.S. and world leaders walking behind in a solemn procession along Connecticut Avenue to the cathedral. 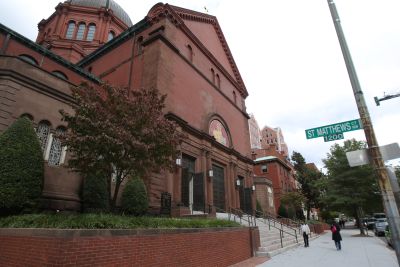 People walk past the Cathedral of St. Matthew the Apostle Oct. 24 in Washington. (CNS photo/Bob Roller)

“The crowds were unbelievable. People just poured out to witness this,” said Schmidt, who remembers the silence of the crowd, interrupted only by the sound of the drums and brass instruments solemnly played by military band members as the procession moved toward St. Matthew’s.

Boston Cardinal Richard Cushing, a friend of the Kennedy family, was the main celebrant at the Requiem Mass. He had officiated at the wedding of John and Jacqueline Kennedy. Also in the sanctuary were then-Washington Archbishop Patrick O’Boyle and Washington Auxiliary Bishop Philip Hannan, who had been attending the Second Vatican Council in Rome and rushed back to Washington after learning of the president’s death.

In a 1966 oral history interview for the John F. Kennedy Presidential Library and Museum, Cardinal Cushing said he was in his residence when he had heard the tragic news about the president’s death. “I was bewildered and shocked.”

The cardinal said, “The words of Christ on the cross of Calvary came repeatedly to my mind: ‘Oh heavenly Father, why has thou abandoned me?’ Everyone then was asking ‘Why, why, why?’… My thought was that here is the most difficult ‘why,’ and I have no answer for it.”

In his 2010 memoir published by Our Sunday Visitor, “The Archbishop Wore Combat Boots,” then-retired New Orleans Archbishop Hannan noted that he had heard the terrible news at his hotel lobby in Rome, after he had helped conduct a daily press briefing during Vatican II. He said he then went to his room, closed the door, and “I wept silently and alone.”

As a Washington auxiliary, then-Bishop Hannan was a close friend of the Kennedys, and was asked by the first lady to deliver the eulogy.

The eulogy also included favorite Scriptural passages that President Kennedy liked to quote, which the family provided to Bishop Hannan.

The responsibility for planning the funeral Mass had been given to Sargent Shriver, the husband of President Kennedy’s sister Eunice and founding director of the Peace Corps established by the president.

In his 2012 biography of his father, “A Good Man,” Mark Shriver wrote that his father then took on the responsibility of organizing the funeral Mass and related arrangements with the same resoluteness, purpose and faith that marked his life of service to his country and his church.

Later reflecting on the funeral Mass in his oral history interview, Cardinal Cushing said, “It was a very, very simple funeral, following as close as possible the services in memory of the martyred Lincoln. No fanfare, everyone bowed in sorrow, tears flowed in abundance.

Outside of St. Matthew’s Cathedral, that little boy’s salute to his father’s flag-draped casket, immortalized in a photograph by Stan Stearns of United Press International, remains perhaps the most poignant image from that day.

In his memoir, Archbishop Hannan recalled what happened next: “Released from restraint, the crowds erupted in an earthquake of pent-up emotion: groans, yelps, uncontrollable sobbing.”

On a recent weekday at St. Matthew’s, its rector reflected on its place in history as the Catholic cathedral in the nation’s capital.

There crowds gathered in joy at the end of World War II in 1945, to attend Mass with Blessed John Paul II in 1979, in sorrow after the 9/11 terrorist attacks on the United States — and 50 years ago for the funeral Mass for the nation’s first Catholic president.

“This indeed is holy ground,” the priest said.