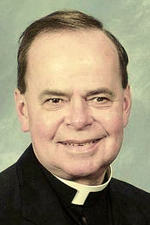 Father McKelvey was ordained May 15, 1993 by Cardinal Anthony Bevilacqua at the Cathedral Basilica of SS. Peter and Paul. His assignments include parochial vicar at Our Lady of Calvary, Philadelphia; St. Eleanor, Collegeville; St. Ann, Phoenixville and St. Anastasia, Newtown Square. He was appointed chaplain at Camilla Hall in 2008 and served there until his death.

Father McKelvey had been in ill health for some time and received a liver transplant some years ago, explained Father Thomas J. Brennan, a former pastor at St. Mary in Phoenixville.

“He was on dialysis but I talked to him the day before he died and he was in good spirits,” he said. “He worked at St. Mary when he was a kid in high school, and the church was very much a part of his life. He was down-to-earth, a straight shooter, an independent person with a good sense of humor and wit about himself.”

“He was a person of deep humility and never wanted to be a problem for anyone,” said Sister Anne Veronica, I.H.M., the administrator of Camilla Hall. “Almost on a weekly basis he would wonder if he should leave and go to St. Joseph’s Villa, but we would convince him he wasn’t a burden, he was a blessing to everybody.”

In spite of his health issues, Father McKelvey was always upbeat, and would start his homilies with a quip or a funny story before getting into his topic. His relationship wasn’t just with the sisters in residence, it was with the staff, visitors and delivery people, and he would often sit by the reception desk and greet people coming in.

“Some of our staff were taught by him when he was a lay teacher and he really had an influence on them,” Sister Anne Veronica said.
Father Paul O’Donnell was stationed with Father McKelvey at St. Anastasia and the two remained friends ever since.

“He loved the Church and he loved the sisters,” Father O’Donnell said. “He had great respect for them and always said the sisters were the main source of the vocations to the priesthood. He had a great sense of humor and a man of simple tastes. He liked ‘50s music and the old television shows from the ‘50s and ‘60s.”

Father McKelvey is survived by many nieces and nephews and their families.

NEXT: Sister Mary Terentia, I.H.M., who served at St. Barnabas Parish, dies at 92