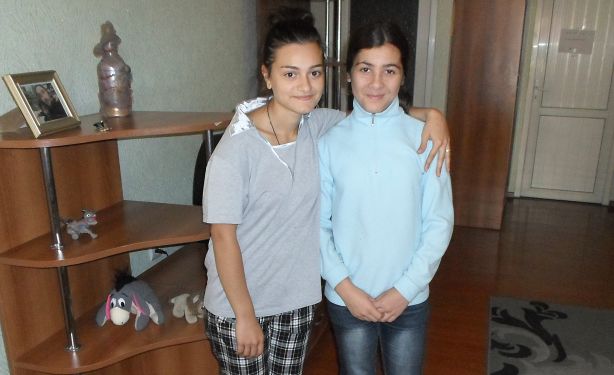 Darina Eradze, 17, and Natia, 12, pictured in an Oct. 5 photo, are among the 50 Georgian girls and boys without parents who live in Caritas-run family-oriented homes in the countryâs capital, Tbilisi. (CNS photo/James Martone)

TBILISI, Georgia (CNS) — Georgian children of parents who could not — or would not — care for them were getting ready for the day on a recent weekend morning in their group house run by the Catholic charity, Caritas.

Among them was Alexandr Museridze, 16, who goes by “Sandro” and was an infant when his mother gave him to her mother, who in turn handed him over to social services when he was 3.

There were also Darina Eradze, 17, whose mother put her in a state-run orphanage four years ago and moved to Greece, and Anri Abashidze, 18, who was 10 when his godmother took him from his vagrant mother and placed him in state care.

“These are children who have no mother or father, or a father who is alcoholic or a mother who is in a bad situation, who has no place to stay,” said one of the group house’s five caregivers, 26-year-old Jimmy Chachkhalia.

Caritas runs five different such houses in the capital, Tbilisi, where 50 children ages 8-18 live together in groups of 10, with separate bedrooms for boys and girls, mostly three to a room, said Chachkhalia, who majored in psychology and studied theology.

He spoke to Catholic News Service at the group house where he works, near a bustling Tbilisi bus hub.

Chachkhalia said that each of the Caritas group houses is supervised by a caregiver like himself at all times, to assure that the children make it to school each day, that they eat and sleep on time, do their homework, learn to take care of themselves and each other, and relax and have fun “like all other children.”

As he spoke, some of the children he cares for were doing regular Saturday morning chores in their home on the second floor of a building, in the middle of a compound. Within the compound, Caritas also offers free vocational training centers for neighborhood children 18 and under who want to study auto mechanics, woodcarving and iconology.

The compound has classrooms for English and other language lessons, a dining hall where the neighborhood’s elderly can get free meals, and an Orthodox Church built by Caritas in 2010 for the home’s children who, like most Georgians, are Orthodox Christians.

“When I came to our house, I liked it because it was small,” said Eradze, who was cleaning the group house’s long exterior balcony, sharing a mop with another girl.

“We are like brothers and sisters, and this home (is) ours,” said Museridze, as he unpacked a bag of groceries in the house’s spacious and sunny kitchen.

“We are like at home, and every day in the morning, we write a list of who will do what and who will cook, or we cook together. I know how to boil meat,” he said.

Both Museridze and Eradze said they remembered the larger state orphanages in which they lived before social workers brought them to the Caritas house in 2009.

“That was an just institution for orphans. Here we are in a small family situation,” said Eradze.

“They screamed at us, and we were many in the same room, boys with girls, and the food was bad,” recounted Museridze of his days in the now-defunct state institution for orphanages in Tbilisi.

“But when that place closed, I discovered this place. It was like a paradise for me,” he said.

Chachkhalia, the caregiver, said he’d left a higher paying job in a government ministry in order work at the Caritas group houses, because helping the children fulfilled him more.

“We don’t stay here as guards, we are teaching them the experiences of life, and when the kid has nobody and he wants to have somebody and no one is around, I can be a friend. It gives me a good feeling. We are not here for the $200 dollars (monthly) payment,” he said.

Chachkhalia said he was tired because he had worked the night shift and was waiting for a colleague to replace him so he could go to his own home for the day to spend time with his wife and their 3-year-old daughter.

He yawned, paused a bit, then said the group house job “in reality … is a struggle; I cannot be the biological father or mother, and I am always saying (to the children) ‘I am just your friend.'”

But simple friendships were part of what Abashidze said he liked most about the group houses.

He was sitting on the couch in the living room, where some other children were playing a video game in a corner.

“I’d be in jail, maybe, because I would have continued in the streets,” he answered, in response to a question about how he imagined he would be today, had he not ended up at the Caritas group house when he was 14.

“It changed my life,” Abashidze said. “It gave me friends, and all that I have now,” which includes a paying job as a member of a Caritas “mobile team,” which makes daily rounds of Tbilisi and its surroundings, searching for and assisting street children.

Museridze sat next to him, and Eradze stood, holding the mop, in the doorway of the living room, which led out to the balcony she had helped to clean.

“I want to study computer programming. I want to work, and maybe then get married after I am 30 … and have kids,” said Abashidze.

“I want to study architecture in Italy,” offered Museridze, adding that he had just spent part of the summer as the guest of a couple in that country.

“They came here last year and invited me to come, and I went and learned Italian. Sometimes now they send me (text) messages which say ‘We miss you,'” he said, smiling and holding up his cellphone.

Eradze said that, after high school, she wants to study cosmetology and “live with my mother again” someday.

“But not in Greece,” she added.