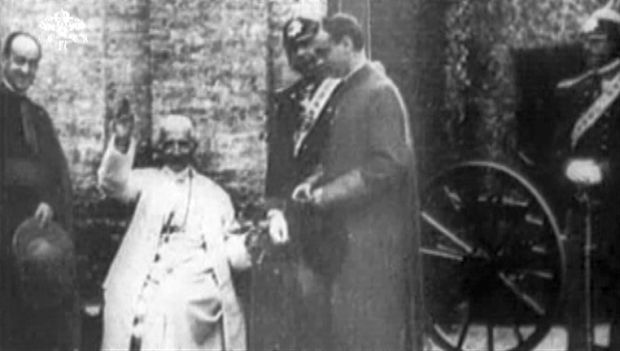 Pope Leo XIII is seen giving a blessing in a frame from an 1896 film in the Vatican Film Library. The short film of Pope Leo is the oldest in the Vatican's collection of more than 8,000 films. (CNS photo/Paul Haring)

VATICAN CITY (CNS) — When Pope Benedict XVI joined Twitter in 2012 and Pope Francis appeared on Instagram the following year, media watchers may have thought they were witnessing a Vatican revolution. In both cases, however, the pontiffs were merely following in a long tradition.

The Catholic Church has a history of taking on major technological innovations that promote mass communication, such as the printing press in the 15th century and radio and television in the 20th. In fact, one of the very first motion picture films ever made was an 1896 reel of Pope Leo XIII.

The brief black-and-white silent movie shows the elderly bespectacled pope sitting with guards and attendants at his side, adjusting his skullcap and blessing the camera.

In another scene, the pope gets off a horse-drawn carriage and walks slowly with his cane to a bench, where he takes off his sun hat, adjusts his glasses and again blesses the camera with long, liquid movements of his frail hand.

It was a blessing, not just to the world, but perhaps also to the birth of this new means of mass communication, said Claudia Di Giovanni, manager of the Vatican Film Library, whose rich collection includes the film of Pope Leo.

Di Giovanni said one of the most media-friendly popes in history was Pope Pius XII, who endorsed and made extensive use of radio, television and cinema.

Pope Pius was the first pontiff to star and act in a film, she said, when he let film crews into the Vatican for eight months to capture a sort of “day in the life” of a pope.

The film, “Pastor Angelicus” of 1942, was a great success all over Europe, she said, showing the pope to a public who otherwise would never have been able to see him.

Pope Pius did the film, Di Giovanni said, as a way “to be near the world,” especially those affected by the still-raging World War II.

“It was a way of showing that the pope wasn’t a person who was closed up inside the Vatican but was a point of reference for everyone who looked to him for hope.”

The next pope, Blessed John XXIII, established the Vatican Film Library in 1959 — the same year he announced the Second Vatican Council — to collect and conserve films about the life of the church and the history of the papacy.

But the more than 8,000 films in its collections also include commercial releases, such as the 2001-2003 Lord of the Rings trilogy. A copy of Schindler’s List (1993) was a personal gift from its director, Steven Spielberg.

Some of the library’s rarest gems came from a collection amassed by a Jesuit identified only as Father Joye in the early 1900s. The priest taught high school history in Switzerland and used contemporary films to bring his lessons to life.

He tried to censor racy or indelicate scenes by shouting to divert the kids’ attention or by standing in front of the projector, but still got in trouble with the school principal and was kicked out of the school, Di Giovanni said.

The Joye collection includes the first film ever made about St. Francis, filmed in Assisi in 1911, and the sole remaining copy of a 1911 dramatization of Dante’s “Inferno.” The latter features pioneering special effects, such as emulsion smeared to produce what looks like fire raining on writhing sinners.

Di Giovanni said early movies were often based on religious themes because they were stories people knew and could follow more easily given the lack of dialogue in silent films.

The film library also operates a small movie theater housed in a former chapel, with marble inlay floors and a high double-vaulted ceiling, and an entrance flanked by two carved stone holy-water fonts in lieu of ticket booth and concessions stand.

The theater doesn’t see much action these days, but it used to host exclusive screenings and world premiers with actors, filmmakers and popes when then-Archbishop John P. Foley was head of the Vatican’s communications council, from 1984 to 2007.

Blessed John Paul II, who had been an actor and playwright before becoming pontiff, relished contact with other actors. Cardinal Foley, an American who died in 2012, arranged to show the pope at least one or two films a year, including the celluloid version of two plays he wrote, “The Jeweler’s Shop” starring Burt Lancaster, and “Brother of Our God” by Polish director Krzysztof Zanussi.

The late pope also saw “Gandhi” at the Vatican theater before he went to India, and “Life is Beautiful” starring Roberto Benigni.

Pope Francis is an avowed film lover, whose favorites include the 1987 Danish film “Babette’s Feast” and the works of Italian director Federico Fellini, particularly “La Strada,” which the pope has said he feels a connection to because of its implicit references to St. Francis of Assisi.

Unfortunately, the future pope said, he never had time to go to the movies when he was archbishop of Buenos Aires. And clearly his busy schedule as pope means his chances of taking in a matinee are slim.

With the screening room just 50 yards from his residence and a treasury of films at his disposal, Di Giovanni says she is hopeful that Pope Francis will be among the theater’s coming attractions.

NEXT: Time for Catholics, Lutherans to confront the Reformation, pope says