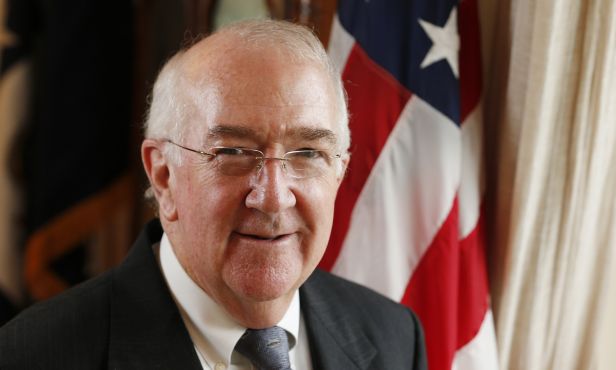 Ken Hackett, new U.S. ambassador to the Holy See, is pictured after an interview with Catholic News Service at the U.S. Embassy to the Holy See in Rome Oct. 24. (CNS photo/Paul Haring)

VATICAN CITY (CNS) — Disagreements need not hinder the Vatican and the Obama administration from collaborating on a broad range of peace and justice issues, including the promotion of religious freedom, said Ken Hackett, the new U.S ambassador to the Holy See.

The envoy spoke to Catholic News Service Oct. 24, three days after he formally took office by presenting his credentials to the pope.

Hackett said Pope Francis has emphasized a number of issues — including poverty, human trafficking, refugees, and peace in Syria and the Holy Land — that also are priorities for the Obama administration.

But he recognized the existence of disagreements, including over the administration’s plan to mandate that all heath insurance plans — even those offered by most Catholic institutions — cover sterilizations and contraceptives, which are forbidden by Catholic moral teaching. The plan prompted Pope Benedict XVI and the papal nuncio to the U.S. to issue public warnings of a threat to Americans’ religious freedom.

Hackett said the Obama administration’s position on the matter is “very well understood” in the Vatican, “but if asked I will try to make the case as thoughtfully and constructively as I can.”

“We may not always agree, but I think religious freedom in the bigger sense is of paramount priority to this administration,” the ambassador said, noting U.S. efforts to defend Christians and other religious groups from persecution in countries where they are minorities.

“Let’s not lose sight of this and get completely covered by the other issues on health care, because there are bigger religious freedom issues,” he said.

Disagreement over the insurance mandate is not likely to impede collaboration with the Vatican, Hackett said, since “there are arrangements in other countries that would be more constraining” than the Affordable Care Act, “and the Holy See is not jumping up and down about those kind of issues.”

The ambassador stressed the importance of the U.S.-Vatican diplomatic relationship and said that Pope Francis, in his young pontificate, has already enhanced the Holy See’s prestige and influence.

With his “attention to simplicity, humility (and) focus on the individual,” the pope is offering a “new sense of what it means to be a Christian,” which has inspired Catholics and non-Catholics around the world and garnered the church better press than it had enjoyed in at least a decade.

“I believe that if we move out at the current pace and in the current style of Pope Francis, in another 24 months he is going to represent a very powerful force in the world,” Hackett said. “It will be back to the days when John Paul II was dealing with the issues in Poland. The EU as a government will probably not be able to think about a major issue of peace or human development without (asking) ‘Where is the Holy Father’s position on this?'”

Such enhanced papal influence might tempt foreign governments to try to “instrumentalize the pope,” Hackett said.

“There’s an obvious default to, ‘Well, if he can do that, why don’t you convince him to say this or that?'” he said. “That’s not going to happen.”

Instead, Hackett said, his role is to show Washington and the Vatican where their views converge as a basis for common action, asking: “Where do we find the mesh here and how can we move it forward?”

In 2012, Hackett retired as president of Catholic Relief Services, the U.S. bishops’ international relief and development agency. He said his 40 years there had prepared him especially well for promoting collaboration with the U.S. on issues of “human development.”

“Since I can interact and relate to a wide variety of church people, I hope I can have the opportunity to bring all of those issues to them for discussion,” he said. “When you’re talking to Cardinal (Laurent) Monsengwo (Pasinya of Kinshasa) and you’re able to talk about peace issues in the Congo writ large, that fits right within our strategies.”

The ambassador summed up his consensus-seeking approaching by saying, “I think you have to focus on the positive” — an attitude he said Pope Francis encouraged at their first meeting Oct. 21.

“You are a diplomat and a Catholic,” Hackett said the pope told him with a wag of his finger. “Don’t lose your sense of humor.”

NEXT: Theory of one hominid species is compatible with faith, experts say