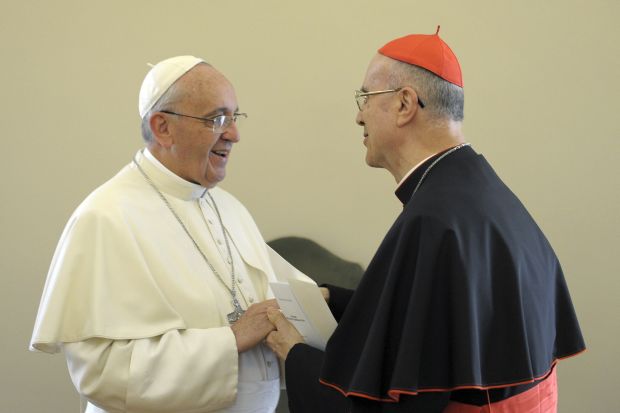 VATICAN CITY (CNS) — Cardinal Tarcisio Bertone, who as Vatican secretary of state drew rising criticism for failures of the Vatican bureaucracy he oversaw, stepped down Oct. 15 with a speech praising the pontificate of retired Pope Benedict XVI and stressing its continuity with that of Pope Francis.

The cardinal made his remarks at a ceremony in the Apostolic Palace marking the end of his seven years as the chief aide to two popes. Before his speech, Pope Francis thanked the cardinal for the “courage and patience with which you have lived the adversities you have had to face. They are so many.”

The ceremony had also been planned as a welcome to the incoming secretary of state, Archbishop Pietro Parolin, but to the surprise of most in the room, Pope Francis announced the archbishop had been unable to attend on account of a “small surgical intervention” that would keep him away from work for a “few weeks.”

The Vatican spokesman, Jesuit Father Federico Lombardi, said the archbishop had traveled to his native Veneto region of northeastern Italy for the surgery, whose nature the spokesman declined to specify. The new secretary of state, who until the end of September served as papal nuncio to Venezuela, could be in Rome by the end of October, Father Lombardi said.

In his remarks, Cardinal Bertone paid tribute to Pope Benedict, whom he served for more than six years as secretary of state, and for more than seven years at the Vatican’s doctrinal office under then-Cardinal Joseph Ratzinger.

“What stirred our passion with Pope Benedict XVI was to see the church understand itself deeply as a communion, and at the same time speak to the world, to the heart and to the intelligence of all with clarity of doctrine and a high level of thought,” the cardinal said.

The retired pope “suffered greatly on account of the ills that plagued the church, and for this reason he gave her new legislation in order to strike out decisively the shameful phenomenon of pedophilia among the clergy, without forgetting the initiation of new rules in economic and administrative matters,” he said.

“I see today in Pope Francis not so much a revolution but a continuity with Pope Benedict XVI even with their differences in style and personal life,” the cardinal said, noting in particular the strong devotion to Mary — and particularly Our Lady of Fatima — that he said united the two pontiffs.

Cardinal Bertone, who once wrote a book on the so-called Third Secret of Fatima, also emphasized his own devotion to the manifestation of Mary, who appeared to three Portuguese shepherd children in 1917.

Pope Francis’ speech recalled a dream of St. John Bosco, founder of the Salesian order to which the cardinal belongs, in which the saint walked through rose bushes full of thorns with the guidance of Mary.

“Dear Cardinal Bertone,” the pope said, “in this moment I like to think that even if there have been thorns, Our Lady Help of Christians has not withheld her aid, and will not withhold it in the future.”

In September, the cardinal defended his controversial record as secretary of state, telling journalists that he saw “these seven years as positive on balance,” but also acknowledging “many problems, especially in the last two years.”

In an apparent reference to the 2012 “VatiLeaks” of confidential documents that pointed to corruption and mismanagement inside the Holy See, Cardinal Bertone blamed a “tangle of crows and vipers” for “throwing accusations at me.”

Under the current constitution of the Roman Curia, the church’s central administration at the Vatican, the Secretariat of State oversees both the Holy See’s international relations and internal affairs and coordinates the work of other curial offices.

Following Pope Francis’ Oct. 1-3 meeting with the new Council of Cardinals advising him on church governance, the Vatican announced that plans are underway for an overhaul of the curia, possibly including the creation of a “moderator” who could assume some of the responsibilities currently exercised by the secretary of state.