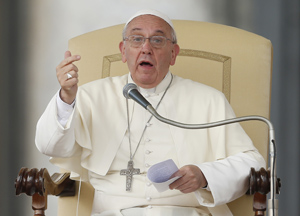 VATICAN CITY (CNS) — Pope Francis denounced widespread hunger due to wasted food as a symptom of a “throwaway culture,” and called for greater effort to build a worldwide “culture of encounter and solidarity” instead.

The pope’s words appeared in his annual message for World Food Day, Oct. 16, addressed to the director of the United Nations’ Food and Agriculture Organization (FAO) in Rome.

(Read the full text of the letter here.)

“The tragic condition in which millions of hungry and malnourished people, among them many children, live today” is “one of the most serious challenges for humanity,” Pope Francis wrote.

The pope called it “paradoxical” that globalization is increasing the world’s awareness of humanity’s needs even as growing individualism “leads to a certain attitude of indifference — at the level of persons, institutions and states — toward those who die of hunger or suffer malnutrition, almost as if it were inevitable.”

The pope called the waste of food, which, according to the FAO, accounts for approximately a third of worldwide food production, “one of the fruits of the ‘throwaway culture’ that often sacrifices men and women to the idols of profit and consumption; a sad sign of the ‘globalization of indifference,’ which is slowly ‘habituating’ us to the suffering of others, as if it were something normal.”

In response, Pope Francis wrote, “it is necessary, today more than ever, to educate ourselves in solidarity, rediscover the value and meaning of this word, so discomfiting and frequently ignored, and make it an attitude fundamental to decisions in politics, economics and finance, in relations among persons, peoples and nations.”

PREVIOUS: In Philippines, fear of aftershocks keeps people in the streets