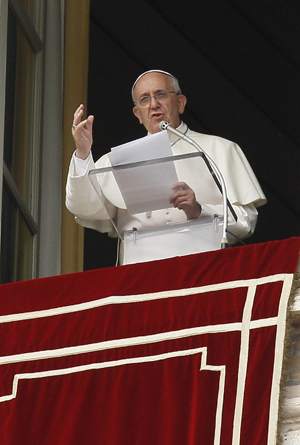 Pope Francis speaks as he leads the Angelus from the window of his studio overlooking St. Peter’s Square at the Vatican Oct. 20. (CNS photo/Paul Haring)

VATICAN CITY (CNS) — No matter how some media may want to spin it, Pope Francis won’t fit into the political categories of left or right, and he will challenge everyone with the truth of the Gospel, said the Vatican’s media adviser.

“Pope Francis is not a politically correct pope,” rather, he is “a loyal son of the church” who presents the hard truths with a heavy dose of mercy, said Greg Burke, senior communications adviser to the Vatican Secretariat of State.

The former U.S. journalist, who has been based in Rome the past 25 years, gave a behind-the-scenes talk at the apostolic palace Oct. 18 to hundreds of benefactors celebrating the 30th anniversary of the founding of the Patrons of the Arts in the Vatican Museums.

In trying to describe his papally appointed role as the Vatican media strategist, Burke, who is an avid soccer fan, said, “We kick the ball to Francis and Francis scores the goals.”

“We let the pope do his thing,” he said.

Pope Francis clearly knows how to communicate, Burke said, and his effectiveness comes from his authenticity. “It’s not charm. It’s Christian charity, which is a whole lot more attractive than charm.”

Burke said he believes “the pope wants to get beyond left and right” by getting people to focus on the Gospels, on God and his truth and mercy.

“He’s a loyal son of the church,” who sees its task as being like “a field hospital” that runs to and helps people who are hurting, he said.

The pope is not advocating a “feel-good” religion of “I’m OK-you’re OK-Catholicism,” Burke said, but talks about the truth of the Gospel that includes mercy and forgiveness.

“The Gospel is not there to make us feel good. The Gospel is there and makes very practical demands on us,” and one of those demands is to “tell people the truth and walk with them to the Lord,” Burke said.

“The pope’s picture should have one of those warning labels” much like a pack of cigarettes, he said, but with the words, “Danger: This man could change your life.”

In his talk, Burke offered his take on decoding the pontiff with his own rundown of “Pope Francis in 10 Words:”

1. Mercy — The story of the Prodigal Son is a recurring theme, and the pope repeatedly says that God never tires of forgiving and welcoming his lost children back home. “The church is waiting here for you with open arms,” is the message, Burke said.

2. Moxie or courage — “We’re all going to get challenged by Pope Francis. Get ready!” People who live comfortably or live in developed nations will be especially challenged, Burke said, adding “This is good. This is the Gospel.”

3. Margins and missions — Francis is continuing with his predecessors’ criticism of a world divided into the haves and have-nots. The pope “is not a fan of cheap grace and feel-good religion. He wants to see Christians who are not afraid to get their hands dirty,” Burke said.

4. Prayer — Non-believers often don’t notice how important prayer is for religious life. For example, Blessed Mother Teresa was often looked upon by the secular press as “a social worker wearing a habit.” But, he said, the pope has constantly been stressing the importance of prayer and urging people to pray.

5. Encounter — The pope is asking people to embrace a “culture of encounter” where they experience God and meet with others, including non-believers. This attitude of encounter and communion also starts at home, with your family, Burke said.

6. Joy — The pope “gets a thumb’s up on that,” he said, because he’s able to show his joy so plainly. According to Pope Francis, he said, the biggest dangers and temptations in life are “discouragement, discord, the doldrums and the devil.”

7. Service — By paying his hotel bill in person (even though he had just been elected pope), phoning people who write to him and doing other tasks that aides could do, the pope is leading by example, Burke said. The message is: “It’s not about power or privilege; if we’re here, we’re here to serve.”

8. Simplicity and humility — Living in a Vatican guest house instead of the apostolic palace, carrying his own briefcase on a trip are just part of how the pope is and people will have to “get used to it because we’ll see more of it,” Burke said.

9. Compassion — “Compassion and suffering with others is something Pope Francis has a knack for,” Burke said, and it’s especially evident when he embraces people and is totally present one-on-one with an individual, even in large crowds.

NEXT: Vatican ambassador tells U.N.: ‘Without life, all other rights are meaningless’