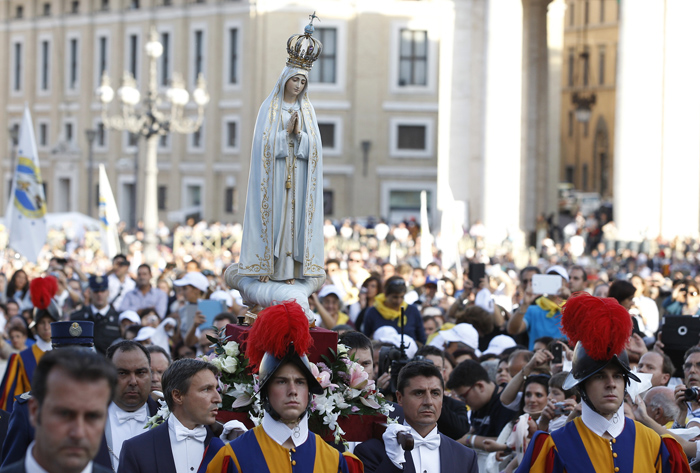 The original statue of Our Lady of Fatima arrives in procession for a Marian vigil led by Pope Francis in St. Peter’s Square at the Vatican Oct. 12. The statue was brought from Portugal for a weekend of Marian events culminating in Pope Francis consecrating the world to Mary. (CNS photo/Paul Haring)

VATICAN CITY (CNS) — Before a congregation of more than 100,000 in St. Peter’s Square, Pope Francis formally entrusted the world to Mary.

“We are confident that each of us is precious in your sight,” the pope said Oct. 13, facing the statue of Mary that normally stands in the shrine at Fatima, Portugal. “Guard our lives in your arms, bless and strengthen every desire for goodness.”

The short ceremony was the culmination of a special Marian Day organized for the Year of Faith. In his homily during the morning’s Mass, Pope Francis celebrated Mary as a model of docility, fidelity and gratitude to God.

“Let us invoke Mary’s intercession,” he said. “May she help us to be open to God’s surprises, to be faithful to him each and every day, and to praise and thank him, for he is our strength.”

Many in the crowd held small replicas of the crowned statue of Our Lady of Fatima, which had arrived in Rome the previous afternoon on a TAP Portugal airlines flight from Lisbon. 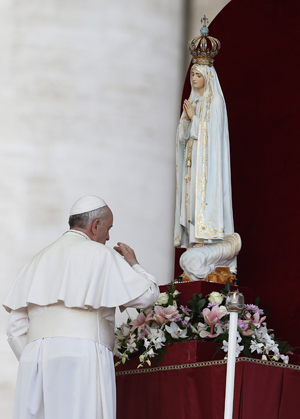 Pope Francis makes the sign of the cross as he prays in front of the original statue of Our Lady of Fatima during a Marian vigil in St. Peter’s Square at the Vatican Oct. 12. (CNS photo/Paul Haring)

An Italian air force helicopter transported the statue, inside an ivory-colored triangular container resembling a musical instrument case, to Vatican City. The statue was then brought to the residence of retired Pope Benedict XVI at the Mater Ecclesiae monastery, where he briefly venerated the statue in the monastery’s small chapel. Afterwards, Pope Francis welcomed the statue at the Vatican guesthouse where he lives.

At the beginning of an Oct. 12 prayer vigil in St. Peter’s Square, four attendants carried the statue on a litter through the crowd and brought it up to front of the basilica. Pilgrims waved white handkerchiefs in a traditional gesture of devotion as the statue passed.

Pope Francis led the vigil, which included a recitation of the seven sorrows of Mary. In a catechetical talk, the pope said that all believers can emulate the mother of God by giving “human flesh to Jesus” when they assent freely to his call.

“Believing in Jesus means giving him our flesh with the humility and courage of Mary, so that he can continue to dwell in our midst,” the pope said. “It means giving him our hands, to caress the little ones and the poor; our feet, to go forth and meet our brothers and sisters; our arms, to hold up the weak and to work in the Lord’s vineyard; our minds, to think and act in the light of the Gospel; and especially our hearts, to love and to make choices in accordance with God’s will.”

Later that night, Pope Francis sent a video message to faithful gathered at 10 Marian shrines around the world, stressing Mary’s role as a bridge to her son.

“Mary points to Jesus,” he said. “She asks us to bear witness to Jesus, she constantly guides us to her son Jesus, because in him alone do we find salvation. He alone can change the water of our loneliness, difficulties and sin into the wine of encounter, joy and forgiveness. He alone.”

Pope Francis has signaled his strong devotion to Mary from the first morning of his pontificate, when he made a brief pilgrimage to the Basilica of Saint Mary Major, Rome’s principal Marian shrine. He later asked the bishops of Portugal to dedicate his pontificate to Our Lady of Fatima.

Oct. 13 is the anniversary of the last apparition of Mary to three shepherd children at Fatima in 1917. Two of the visionaries, Blessed Jacinta Marto and her brother Blessed Francisco Marto, were beatified by Blessed John Paul II in 2000. Their cousin, Sister Lucia de Jesus dos Santos, died in 2005, and three years later Pope Benedict exempted her from the usual five-year waiting period between a death and the start of a beatification cause. 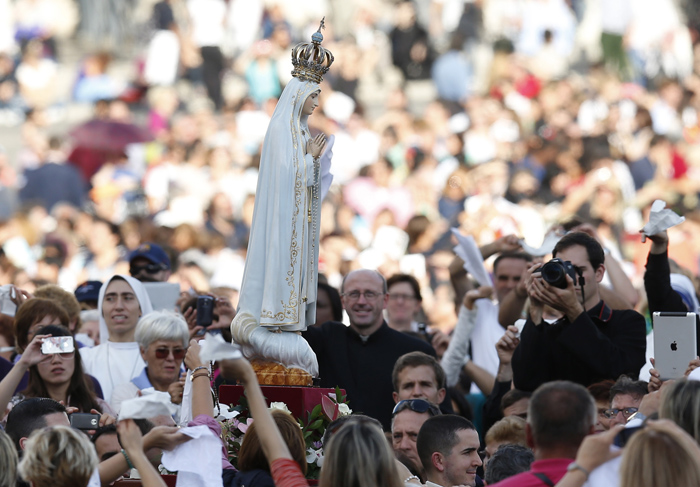 NEXT: Pope says maternity is ‘special,’ but warns against restricting women