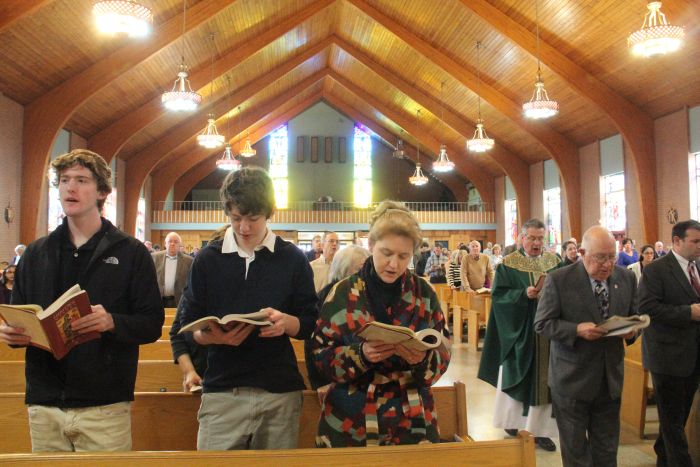 Parishioners of Our Lady Help of Christians Parish in Abington sing the opening hymn at a Mass celebrated Nov. 17 by their pastor, Father Anthony Janton. (Sarah Webb) 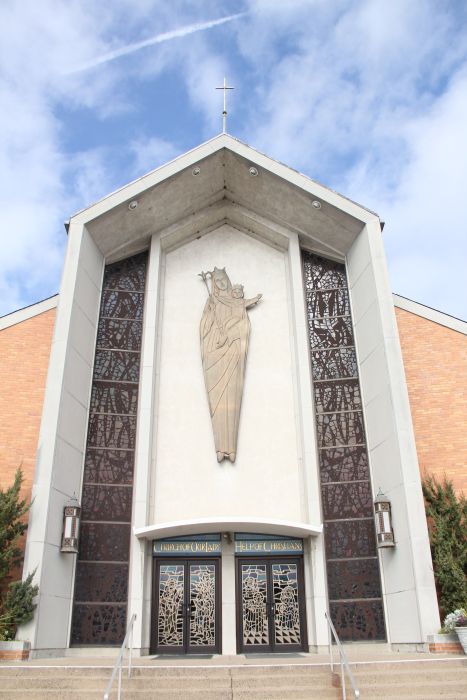 The soaring, modernist Our Lady Help of Christians Church was dedicated 50 years ago this Dec. 8.

The Marian Year Dec. 8, 1953 to Dec. 8, 1954 was special. So special, in fact, that Archbishop (later Cardinal) John F. O’Hara placed every one of the 10 parishes he established that year under the protection of the Blessed Virgin, under one of her various titles.

(See a photo gallery of the church and Our Lady Help of Christians’ parishioners.)

Father (later Msgr.) Joseph D. Shallow was the founding pastor, and his early Masses were celebrated in an existing residence that also served as his rectory. Back in those days it was a general rule that parishes had to build a school before they even thought about a permanent church and so groundbreaking for a school took place on March 25, the Feast of the Annunciation, 1954.

When it was completed, Masses were transferred to the school hall and Sisters of the Congregation of the Holy Cross, a branch of the congregation of which Archbishop O’Hara was a member, arrived to take charge of the school. They remained until 1968 when the Sisters of St. Joseph arrived, and they in turn, in 1984 were replaced with a lay principal and faculty.

As of last year, at the recommendation of the Blue Ribbon Committee on Catholic education, the school merged with that of St. David School, Willow Grove, as Queen of Angels School at the Willow Grove site, with a current enrollment of 328 students.

In time Msgr. Shallow was succeeded by Msgr. Clement Bennington, Father Joseph Bowen (who passed away Nov. 17) and since 2004, Father Anthony Janton.

The strong point for his 1,100-family parish “is certainly the lay participation in all of our committees and groups,” Father Janton said.

William McLaughlin, a member of the Parish Council and Finance Committee, is one of the reasons the parish has an active Holy Name Society — he’s the president of the Archdiocesan Holy Name Union, and Father Janton is the spiritual director.

McLaughlin remembers Our Lady Help of Christians from early childhood, but he moved away and came back in 1999. “I think it is remarkably the same. It’s a good parish with strong families and a good sense of community,” he said.

He credits the presence of many of the founding parishioners to the stability and also, “Father Janton is very much part of that,” he added.

Although this celebration marks 60 years of the parish founding and 50 years of the church consecration, “It’s not the building it’s the people,” said Marie Galante, who along with her husband, Dominic, has been a parish member for 23 years. She taught 8th grade at the school until its closing last year. “I loved the children and the families were wonderful,” she said.

For her it was a joy to go to Sunday Mass and see her students in the pews with their families. “It is funny how people sit in the same pew at the same Mass every week.”

Another strong point of Our Lady Help of Christians, she believes, is the availability of the rectory. “If I have a question I can pick up the phone and get an answer,” she said, “and now with our website, almost everything is there.”

Bottom line, “The parish is home to me,” Galante said.

NEXT: Long journey from Africa began with faithful steps and a dream