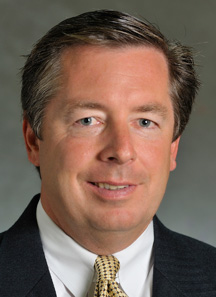 Timothy O’Shaughnessy, chief financial officer of the Archdiocese of Philadelphia.

In an effort to plug a more than $150 million hole in the retirement plan for its lay employees, the Archdiocese of Philadelphia announced Tuesday, Nov. 5 that it would “freeze” the current defined benefit pension plan next summer.

The decision to freeze the plan and cease the accrual, or accumulation, of benefits in the Lay Employee Retirement Plan after June 30, 2014 affects 8,500 current lay employees of the archdiocese.

All current staff of the archdiocese including workers in parishes and schools, the Archdiocesan Pastoral Center, agencies and facilities of Catholic Human Services and other church entities learned of the news in meetings on Tuesday. More details and a personalized statement of expected benefits were to be mailed to all beneficiaries Nov. 7.

Following that distribution, staffers of a call center will be available to answer specific questions regarding the announcement beginning Nov. 12, the archdiocese said in a statement. (See all related documents on the website of the Philadelphia Archdiocese here.)

“This action is not being taken to resolve a short-term concern,” said Timothy O’Shaughnessy, chief financial officer of the archdiocese. The $478 million in assets of the plan “are well managed, they’re in a separate legal entity governed by a separate trust agreement and a separate pension board.

The latest initiative to stabilize the archdiocese’s teetering finances follows moves over the past 18 months to sell church buildings and land, lease Catholic cemeteries, market archdiocesan nursing homes for possible sale and lay off 25 percent of the workers at the archdiocese’s headquarters.

The underlying reasons for those decisions were a financial condition marked by a reported $39.2 million operating deficit for the fiscal year ended June 30, 2012, and revelation of $350 million in long-term debt, the largest component of which was the $152 million shortfall in the pension plan.

In such a plan, employees do not contribute to the pension; the employer contributes funds based on a percentage of the employee’s salary. The monthly pension benefit is based on a formula using a participant’s years of service and compensation history.

“I’m very confident about the short term and the medium term but for the long term we need to put a solution in place that works for both the plan and the archdiocese. And that’s what we think we’ve done,” Timothy O’Shaughnessy, archdiocesan CFO.

Under the new plan, the archdiocese will contribute a percentage of payroll but the employee will also be able to contribute to the fund on a pretax basis (up to limits indicated by rules of the Internal Revenue Service), and be able to choose the make-up of funds in which to invest for his or her retirement.

While the liability, or expected pay out, of the defined benefit plan will not grow over time after the freeze, the archdiocese will continue to contribute toward it in order to achieve financial stability for the fund so it can satisfy the commitments to retirees.

The switch from traditional pension plans such as that of the archdiocese to defined contribution plans has accelerated in recent years for companies of all sizes as well as other dioceses.

One factor is people are working more years and living longer than they were expected to do at a plan’s inception, be that Social Security in the 1930s or the archdiocese’s plan, which started in 1965. The result is much higher benefit liability for such a plan because of the length of time it is likely to be enjoyed by a retiree.

In such cases, pension plans face the dilemma of raising contribution rates (taxes, in the case of governments, and charges to parishes and church entities, in the case of the archdiocese); or changing the benefit structure, or both.

The archdiocese’s Lay Employee Retirement Plan as of June 30, 2012 held assets of $478 million, but actuarial calculations indicate a liability of $630 million at that date for future retirement benefits. The difference between the two has been growing for years and now stands at $152 million.

One strategy to close the gap years ago might have been to raise significantly the annual pension charges to parishes and other archdiocesan entities in order to more fully fund the plan. But a steep rise in the charges would have represented a daunting and possibly unworkable prospect since many parishes in the archdiocese continue to struggle financially.

By freezing the plan and thus the growth in potential benefits to be paid, the decision allows the archdiocese time to replenish the fund through continued contributions in order to fully fund the benefits of today’s workforce. The fund is expected to be in balance by approximately 2031.

Since 2012, the pension charge to parishes and other entities has been raised to 7.5 percent. Next summer at the time of the freeze, the charge will rise at least to 8.5 percent – 4 percent will constitute the contribution toward the traditional pension plan and 4.5 percent to the new defined contribution plan.

“If we maintain the (current) plan and keep charging 7.5 percent, we will keep falling further behind,” O’Shaughnessy said. “Even if we increase the funding level to 10 percent, which is probably at the limit of what we can afford, the plan still projects to be underfunded in the range of $100 million 30 years from now. That just doesn’t work.

“By freezing the plan at June 2014 and contributing to it annually, we believe that we can get the plan to fully funded status in 20 to 30 years. Until then, there are assets that are adequate to meet the retirement benefit plan payments to participants that they have earned, until the plan is fully funded.”

Funding the traditional pension plan at 4 percent calculates to a contribution of about $12 million per year.

All the above assumptions, however, are based upon the current size of the archdiocese’s workforce. A smaller workforce might result from possible mergers of parishes and schools, and possible sale of nursing homes. That means less funding would be contributed to the old plan because contributions are based on payroll. That could extend the time it might take to balance the assets with the liabilities of the old plan unless other initiatives for funding or liability reduction are implemented.

At the same time, the future sale of archdiocesan property theoretically could be used for an influx of funds to the plan, according to O’Shaughnessy.

Regardless of what the future may hold, the archdiocese studied current conditions to formulate its options for the retirement plans.

“Right now, not knowing what those closures are and their extent, it would be too hypothetical” to use them as a basis for planning, O’Shaughnessy said. “If we have a large transaction or a number of large closures over the years, we’re going to have to take another look at this.”

Some details of the new plan may resemble an optional retirement plan currently offered to archdiocesan employees. The 403b plan, similar to a 401k plan, allows employees of nonprofit organizations to invest retirement funds from a menu of investment options on a pretax basis without an employer contribution.

Other details are still unsettled at this time.

One open question of interest to those vested in the plan is whether they might take a lump-sum payment of their retirement funds in the traditional plan, or roll over the full or partial amount to the new plan.

A question-and-answer document distributed to employees Nov. 5 said the archdiocese “is currently evaluating this option and will provide additional information in the coming months.”

Archdiocesan officials said that by spring, a vendor to operate the new retirement plan will have been selected and the full plan document with details will be completed. Archdiocesan employees will receive new information at that time.

O’Shaughnessy said the archdiocese is taking action now “to ensure that we’ve got a plan that meets its ultimate obligations. I’m very confident about the short term and the medium term but for the long term we need to put a solution in place that works for both the plan and the archdiocese. And that’s what we think we’ve done.”