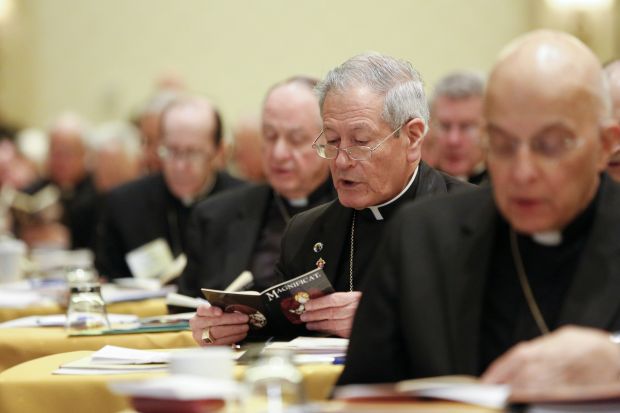 Members of the U.S. Conference of Catholic Bishops pray before the second day of proceedings at the bishops' annual fall meeting Nov. 12 in Baltimore. (CNS photo/Nancy Phelan Wiechec)

BALTIMORE (CNS) — The U.S. bishops Nov. 12 approved the development of a pastoral statement on the dangers pornography poses to family life that would serve as a teaching tool for church leaders.

On Day Two of their annual fall general assembly in Baltimore, the bishops voted 226 to 5 to allow the Committee on Laity, Marriage, Family Life and Youth to develop the statement.

Developing such a statement falls in line with an objective of the U.S. Conference of catholic Bishops’ 2013-16 strategic plan to address pornography and its dangerous effects on family life.

The committee planned to bring a draft to the bishops in 2015. It would be the first formal statement on pornography issued by the bishops as a body.

In presenting the case for such a statement, Bishop Richard J. Malone of Buffalo, N.Y. (and current administrator of the Diocese of Portland, Maine), the incoming chair of the committee, said that pornography poses continuing pastoral challenges for the clergy and the faithful.

“The more pornography spreads, the more violent and debased it becomes and the more it exploits the men and women who are part of the industry,” he explained.

Citing the explosion of pornography on the Internet and its exploitation of women, men and children, Bishop Kevin C. Rhoades of Fort Wayne-South Bend, Ind., outgoing chairman of the bishops’ Committee on Laity, Marriage, Family Life and Youth, told Catholic News Service prior to the meeting that committee members felt it was time for the USCCB to bring its moral voice to the worldwide debate.

“There’s a lot of concern about the increasing availability and consumption of pornography and its effect on marriages and families and on youth,” Bishop Rhoades explained. “Pornography has become more pervasive than it’s ever been in history.

“Pornography is having such a detrimental effect that we thought it would be good to have the bishops as a whole body address this issue. It’s not been before that whole body. It’s risen to that level of concern, I think,” he said.

Family Safe Media, an online service offering families tips for dealing with profanity, promiscuity and violence in the media, estimates that 4.2 million websites — 12 percent of the all websites worldwide — feature pornography. It projects that the industry generates $57 billion annually through a variety of media.

“Another factor is priests reporting as confessor the growing number of those confessing pornography use,” the bishop added. “Priests are seeking assistance on how to council people. There’s a growing number of women viewing it, but the vast majority is still men,” Bishop Rhoades said.

“It has destroyed that trust and the intimacy between a husband and wife. That can be very tragic,” he added.

Bishop Rhoades was ending his three-year term as committee chairman at the end of the bishops’ meeting. His successor, Bishop Richard J. Malone of Buffalo, N.Y. and apostolic administrator of the Diocese of Portland, Maine, will oversee the drafting of the statement.

“I think it’s a very opportune time, in my opinion, for the bishops as a whole to address this, to invite people to freedom in Christ and his mercy. That’s part of the whole healing of this, the spiritual aspect,” Bishop Rhoades told CNS.

“There needs to be that pastoral outreach to those affected by it, those addicted by it, and providing practical help.”

Bishop Rhoades was unable to attend the bishops’ Baltimore meeting because he was in Paderborn, Germany, to concelebrate the Nov. 10 beatification Mass for Mother Maria Theresia Bonzel.

The German-born nun founded the Sisters of St. Francis of Perpetual Adoration, an order that has houses and operates a university in Bishop Rhoades’ diocese.

PREVIOUS: Catholics described as eager to give input as church prepares for synod