Newark coadjutor asks for ‘prayers, patience’ as he learns his new role 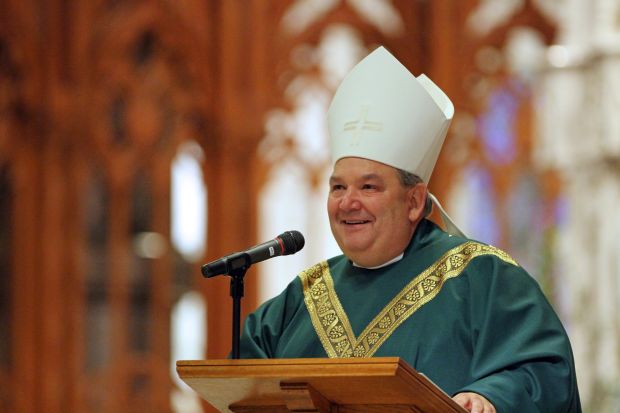 Coadjutor Archbishop Bernard A. Hebda of Newark, N.J., smiles Nov. 5 as he addresses the congregation at the end of his Mass of welcome at the Cathedral Basilica of the Sacred Heart in Newark. (CNS photo/Gregory A. Shemitz) 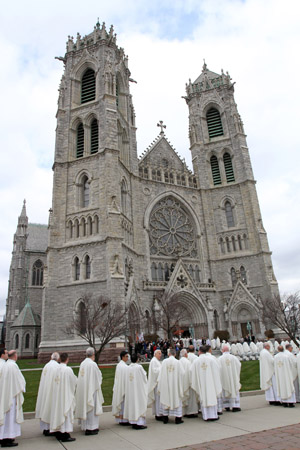 Clergy line up outside the Cathedral Basilica of the Sacred Heart in Newark, N.J., Nov. 5 before the Mass of welcome for Coadjutor Archbishop Bernard A. Hebda of Newark. (CNS photo/Gregory A. Shemitz)

NEWARK, N.J. (CNS) — In one of America’s largest gothic cathedrals, more than 2,000 clergy, religious and lay Catholics gathered Nov. 5 with four cardinals and bishops from six states to welcome Coadjutor Archbishop Bernard A. Hebda to his new see during a two-hour Mass.

In self-effacing and humorous remarks, Archbishop Hebda, 54, noted he had just completed the draft of a three-year pastoral plan for the Diocese of Gaylord, Mich., when he received the call from the apostolic nuncio to the United States two months ago that he had been appointed to Newark.

“I told the Lord my plans and he not only laughed, he had moved me to a diocese that is arguably the polar opposite of Gaylord,” Archbishop Hebda said, explaining that he has yet to see road signs warning of elk — common in his former rural diocese — during his drives around largely urban Hudson, Bergen, Essex and Union counties.

Paying tribute to Newark Archbishop John J. Myers, the clergy, religious and faithful of the New Jersey archdiocese of 1.5 million, Archbishop Hebda said, “I’ve found myself scratching my head and asking what I could possibly contribute here.”

The archbishop spoke in the Cathedral Basilica of the Sacred Heart toward the end of a Mass of welcome.

“It’s really nice to be part of this, because it’s so special,” said Lourdes Rosa, 15, of Jersey City. “He could be pope one day and then we will tell people, ‘We met the pope,'” added her 10-year-old brother, Isaias.

While relaxed enough to greet family as the procession made its way up the cathedral aisle, Archbishop Hebda was awe-struck by his surroundings beneath soaring vaults and the cathedral’s 214 stained glass windows. At the altar rail, he twice wiped tears from his eyes before entering the sanctuary.

After Communion, he recalled how his late mother, Helen, and his father, Bernard — who was in the front row — had been “wonderful teachers of the faith.” His brothers, Terrence and Patrick, were there with their families, as was his sister, Yvonne, who proclaimed one of the first readings from Isaiah. 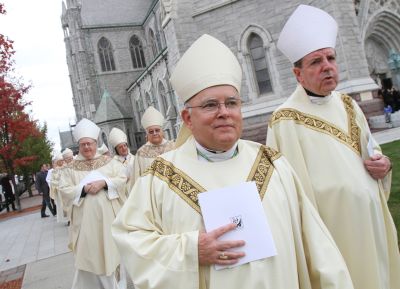 Archbishops Charles J. Chaput of Philadelphia and Allen H. Vigneron of Detroit process with fellow bishops outside the Cathedral Basilica of the Sacred Heart in Newark, N.J., Nov. 5 before the Mass of welcome for Coadjutor Archbishop Bernard A. Hebda of Newark. (CNS photo/Gregory A. Shemitz)

“Quite honestly, I’m not sure why the Lord has called me here, what gift or gifts he is asking me to add to this ecclesial mix, but I am confident that there is some reason, some purpose,” Archbishop Hebda said. “I ask for your prayers and patience as we together discover how it is that the Lord is asking me to serve.”

Archbishop Hebda’s appointment, announced Sept. 27, comes three years before Archbishop Myers, former bishop of Peoria, Ill., reaches 75, the age at which canon law requires bishops to turn in their resignation to the pope. As coadjutor, Archbishop Hebda would automatically succeed Archbishop. Myers upon his retirement or death.

Archbishop Myers, a canon lawyer like Hebda, has been Newark’s ordinary since 2001, said he intends to continue working until retirement, but asked the Vatican for a coadjutor to help with major archdiocesan projects including the consolidation of parishes and a restructuring of its schools.

Archbishop Hebda had been bishop of Gaylord since 2009, 20 years after he was ordained a priest for his home Diocese of Pittsburgh. A graduate of Harvard University and Columbia Law School, he entered the seminary in 1984, after practicing law for about a year.

He completed his theological studies the Pontifical Gregorian University in Rome and ministered in parishes, a college and the chancery for six years before being recalled to Rome for seven years to serve on the Pontifical Council for Legislative Texts.

“We welcome Archbishop Hebda as yet another gift from God and know that he will lead us both by his teachings and example to fuller union with the Father, the Son and the Holy Spirit,” Archbishop Myers said in his homily.

Archbishop Carlo Maria Vigano, the nuncio, read the apostolic letter of appointment from Pope Francis, which said Archbishop Hebda’s years in Gaylord have demonstrated the prelate “can fulfill even greater responsibilities.” 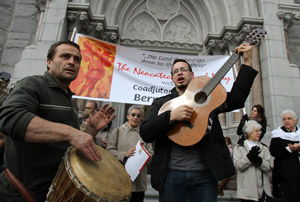 Members of the Neocatechumenal Way sing and play instruments outside the Cathedral Basilica of the Sacred Heart in Newark, N.J., Nov. 5 before the Mass of welcome for Coadjutor Archbishop Bernard A. Hebda of Newark. (CNS photo/Gregory A. Shemitz)

“You go from the state on the Great Lakes to the Garden State,” the pope said.

Bishops came from Michigan, Florida and Wisconsin, as well as from New Jersey, New York and Pennsylvania. Ahead of them in the procession by some 260 priests and 50 deacons.

Among the religious were Sisters of Charity of Seton Hill, including Archbishop Hebda’s fourth-grade teacher, Sister Maureen Dougherty, who later worked with him at Prince of Peace Parish, his first assignment as a priest.

“He is so welcoming, down-to-earth and human,” she said. “He deflects attention from himself, because he knows God is at the center of our lives — so you’re not the guy to call attention to yourself.”