Something — or something less — for everyone in new farm bill? 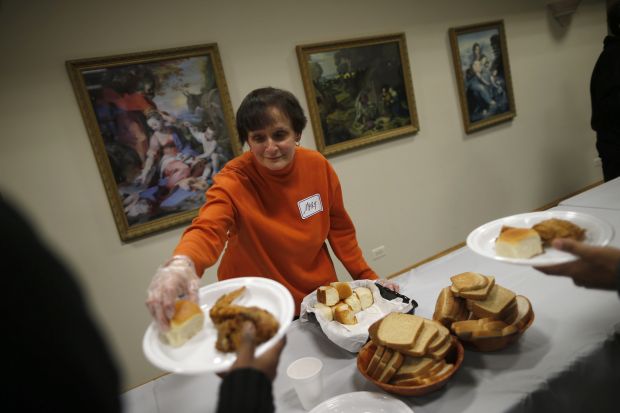 WASHINGTON (CNS) — The farm bill, already one year late, could be even later if the House-Senate conference committee working on the compromise version takes its sweet time.

According to Bob Gronski, a policy analyst with the National Catholic Rural Life Conference, the lawmakers are taking the bill one “title” at a time until the conference committee is satisfied with the result.

The most contentious issue is likely to be the nutrition title, which includes the Supplemental Nutrition Assistance Program, once known as food stamps.

A 13.6 percent increase in that food aid, approved in 2009 as part of the American Recovery and Reinvestment Act, expired Nov. 1. It’s the first cut in the program since it was started in 1964. House and Senate negotiators have two deals on the table: The Senate version, which cuts $4 billion from the program over the next 10 years, and the House version, which cuts nearly $40 billion instead.

Father Pat Delahanty, executive director of the Catholic Conference of Kentucky, did not mince words about what he thought of the House proposal.

“The number of people that that (cut) affects and the depth to which it affects is morally outrageous,” Father Delahanty told Catholic News Service Oct. 30. “I can’t believe that people who claim to have an interest in families would want to put poor families, low-income families, in a position where they can barely feed themselves. It’s just completely — well, it’s despicable, frankly. And it doesn’t need to happen.”

A similar sentiment emerged during an Oct. 30 media briefing with religious leaders from eight states in the Southeast, a region where the House delegations are largely Republican, and the GOP prevailed with the $40 billion SNAP cuts in its version of the farm bill.

A Bread for the World analysis of the cuts suggested that to make up for them, each church in the United States would have to increase its food assistance by nearly $15,000 a year for the next 10 years.

The Rev. Russell Meyer, a minister of the Evangelical Lutheran Church in America who is executive director of the Florida Council of Churches, said the notion by some members of Congress that churches will pick up the slack “represents a tax on people of faith.”

Just about every title in the upcoming farm bill, Warthesen said, has less money to spread around than the farm bill that expired a year ago — and has since been subject to one extension after another as lawmakers have been unable to develop a satisfactory compromise.

The one exception, he said, was crop insurance. While insurance is necessary to protect farmers, according to Warthesen, insurance isn’t tied to conservation practices, in theory allowing for farmers to plan on land never used before for farming, or not suitable for farming, and then file insurance claims if the land doesn’t produce.

U.S. bishops who head their conference’s committees on domestic and international issues, in conjunction with the heads of the National Catholic Rural Life Conference, Catholic Relief Services, Catholic Charities USA and the Society of St. Vincent de Paul, sent letters Nov. 1 to House and Senate members outlining their shared priorities on the farm bill.

Those priorities include rejecting SNAP cuts as well as a proposal to eliminate access to SNAP benefits for former criminals and to tie the benefit to state “work requirements” — which would throw families off the rolls in an ongoing tenuous economy; supporting grants to help beginning, socially disadvantaged, and small and midsize farms and ranches; protecting conservation programs from further cuts; retaining conservation compliance for receiving subsidies for crop insurance premiums; and cutting crop insurance premium subsidies 15 percent for farmers who make more than $750,000 a year.

These are the same priorities this Catholic consortium has offered for more than a year whenever there seemed a chance that a farm bill could actually pass. If no bill is in place by Jan. 1, or yet another extension granted, milk prices could shoot through the roof because a truly expired bill resets the milk program back to 1949 levels.

Not only is the farm bill itself in limbo, but so are farmers. Jon Jovaag, who returned to farming his parents’ 400 acres near Austin, Minn., two years ago after working 15 years in farm-related industries, told CNS Nov. 7 there are U.S. Department of Agriculture web pages with grant application forms for conservation and for beginning farmers that still show up but can no longer be filled out.

Although farm prices have been good as of late, Jovaag said, it would have been much worse for him had not his parents already had land. Farmland in his region is selling for up to $10,000 an acre. “And the prices just keep going up each year,” he said.

The farm bill even has an international title because of food aid sent abroad. Eric Garduno, a CRS senior legislative specialist working in Washington, said CRS would like to be able to continue doing more than just hand out food in an emergency overseas.

“They all get it. They all understand how important the programs are,” Garduno said of Congress funding development programs meant to lessen the need for continued emergency aid. “but it’s tough to have a five-year development plan if you don’t have the money (for it). … That makes the program a little more robust, a little bit more than just handing out food. … At the same time, we need to make sure there is funding for the poverty reduction type programs.”

Garduno said CRS also would like to be able to get out of the business of taking surplus U.S. food and selling it overseas in order to raise funds for its program. He said CRS initially rebuffed the tactic when it first surfaced in the 1990s, adding that CRS eventually became one of the better aid agencies at selling the food.

Even so, there is the risk of disrupting local markets, which bring needed income to local farmers, when any agency starts selling U.S. food in those markets. Garduno said CNS “takes great care” not to disrupt those markets, but even in a best-case scenario, “the general consensus is that we’re losing 25 cents on the dollar” when selling U.S. food overseas.

NEXT: Speakers see Vatican openness to including more women in church roles