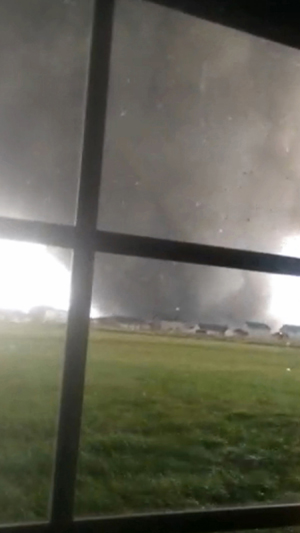 This image of an approaching EF4 tornado is from a 54-second video shot by Anthony Khoury of the devastated community of Washington, Ill. The video, in which Khoury can be heard praying the Our Father and Hail Mary from his basement, has been seen by millions since a series of storms pummeled the Midwest Nov. 17. (CNS photo/courtesy of Anthony Khoury)

WASHINGTON, Ill. (CNS) — Viewers around the world have been captivated and inspired by both the sight and the sound of a 54-second video shot through a basement window by Anthony Khoury, 21, as a massive tornado devastated his Washington neighborhood Nov. 17.

As the powerful EF-4 twister is clearly seen making its way near his family’s home, Khoury is heard praying the Our Father, a Hail Mary, and a Glory Be. His parents, Sarkis and Antoinette, are also heard praying in the background.

The Khoury home was not damaged. After the tornado passed, Anthony and his father drove around the neighborhood and got their first glimpse of the devastation in their community, where hundreds of homes were destroyed.

Later in the day, Anthony’s mother asked her son to send his video to an aunt in Chicago who was concerned about their safety. Ten minutes later, the aunt called back to say she had forwarded it to CNN.

“Then everyone just started getting ahold of it,” said Anthony, who by the following day had been interviewed a dozen times by networks from the BBC to the Weather Channel. The video was shown the morning of Nov. 18 NBC’s “Today” show. In introducing it, Al Roker said he would be quiet so viewers could hear the prayers being recited.

One headline called it the “Lord’s Prayer” tornado video.

“People are asking me, ‘Why did you pray?'” said Anthony, who is a graduate of St. Patrick Grade School in Washington and Peoria Notre Dame High School. He attends St. Sharbel Maronite Catholic Church and St. Mark Catholic Church, both in Peoria.

“I come from a super Catholic family,” he told The Catholic Post, newspaper of the Peoria Diocese. “I’m used to being surrounded by faithful people. Most faithful people in that situation would pray. It gives us courage and strength that God will protect us.” 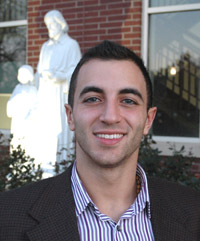 Anthony Khoury is pictured outside outside the diocesan pastoral center in Peoria, Ill., Nov. 18. (CNS photo/Tom Dermody, The Catholic Post)

Not everyone facing a life-or-death moment would grab their phone to shoot video, but Anthony said he and his family were in the basement and he was at least 10 feet from the window, using his phone’s camera zoom.

“I had never seen anything like it close by,” he said of the EF-4 rated tornado that “came out of nowhere” at about 11 a.m. “I felt the need to record it.”

“God, I hope no one is hurt,” Anthony can be heard saying as the video begins. He then prays the Our Father as a neighbor’s trampoline is tossed across the screen. His voice calms as he continues with the other prayers, ending with “God, our Father in heaven, have mercy on us.”

Anthony, now a student at Illinois Central College studying health sciences, said he believes God is using the video and his witness “to show we must have faith that God will keep us safe and give us the strength to endure all trials and threats and sufferings.” He freely granted permission to share the video because he believes it glorifies God.

Asked the day after the storm how many times his video had been viewed, Anthony replied “millions.”

“He’s very religious, always,” said Anthony’s father, who told his wife and son to head for the basement when sirens went off and he heard what sounded like a helicopter. “He’s a great kid, in church all the time.”

Dermody is editor of The Catholic Post, newspaper of the Diocese of Peoria, Ill.

NEXT: ‘The hungry need to be heard,’ Georgia bishops tell Congress