Bones of St. Peter to go on display at Vatican for first time 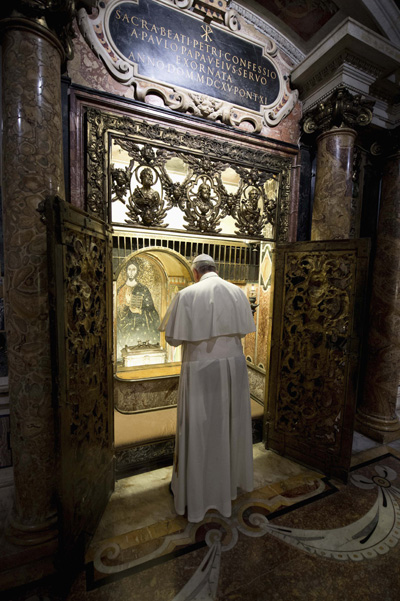 Pope Francis prays at the tomb of St. Peter inside St. Peter’s Basilica at the Vatican Nov. 2, All Souls’ Day. (CNS photo/L’Osservatore Romano via Reuters)

VATICAN CITY (CNS) — For the first time, the bones traditionally believed to be the relics of St. Peter the Apostle will be on public display for veneration.

Archbishop Rino Fisichella, president of the Pontifical Council for Promoting New Evangelization, said the veneration of the relics at the Vatican is a fitting way to conclude the Year of Faith Nov. 24.

Writing in the Vatican newspaper Nov. 8, the archbishop, whose office organized many of the Year of Faith events, said millions of pilgrims marked the Year of Faith by making a pilgrimage to St. Peter’s tomb and renewing their profession of faith there.

“The culminating sign” of the year, he said, “will be the exposition for the first time of the relics traditionally recognized as those of the apostle who gave his life for the Lord here.”

The bones were discovered during excavations of the necropolis under St. Peter’s Basilica in the 1940s near a monument erected in the fourth century to honor St. Peter.

No pope has ever declared the bones to be authentic. However, after scientific tests were conducted on the bones in the 1950s and ’60s, Pope Paul VI said in 1968 that the “relics” of St. Peter had been “identified in a way which we can hold to be convincing.”

PREVIOUS: From New Jersey to the Vatican, opening a dialogue with the Gospel