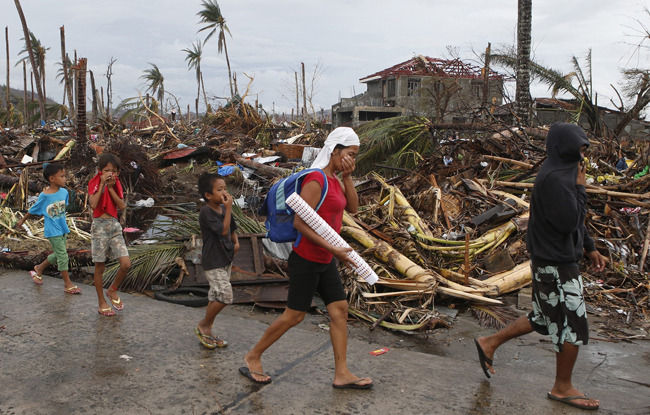 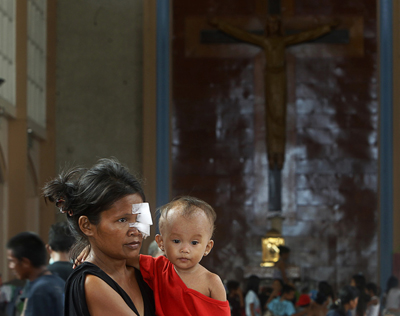 An injured mother carries her son at a Catholic church serving as an evacuation center in Tacloban, Philippines, Nov. 13. Desperation gripped islands devastated by Typhoon Haiyan as survivors panicked over delays in supplies of food, water and medicine, some digging up underground water pipes and smashing them open. (CNS photo/Romeo Ranoco, Reuters)

MANILA, Philippines (CNS) — The devastation brought on by Super Typhoon Haiyan is on a scale so big it is “unimaginable,” said Jesuit Father Edwin Gariguez, head of Caritas in the Philippines.

“This is beyond our capacity,” Father Gariguez told Catholic News Service by phone from Cebu province Nov. 13. “That’s the reason why we have our Caritas network with us now.”

The head of Caritas Philippines and his counterparts from the Netherlands and Germany, as well as the communications staff of Caritas Internationalis, were on their way to Leyte, one of the provinces that bore the brunt of Haiyan’s first lashing on the central islands of the country. The plan was to appraise the needs on the ground and make contact with the various dioceses that have been affected.

Father Gariguez said the U.S. bishops’ Catholic Relief Services was doing the same kind of work ahead of a mid-November meeting with aid agencies and local parish priests to be hosted by Archbishop Jose Palma of Cebu. When the typhoon hit Nov. 8, the CRS country representative to the Philippines, Joe Curry, was already in Bohol dealing with relief from the Oct. 15 earthquake, so CRS was able to get its assessment teams to Leyte Nov. 10.

With about 600,000 people displaced by the storm, the task of getting aid to Filipinos posed a challenge in terms of coordination and the logistics.

But five days after the storm cut a path of damage that obliterated as many as 90 percent of the houses in some areas, there were still stories of people not receiving anything.

Adelyn Manos was one of those. At the entrance of the Villiamor Air Base in Manila, she took cover from the rain under at a tarp-covered shuttle stop.

She had just arrived via military plane from Tacloban, a city in Leyte that some are calling “ground zero” because of the decimation there from a 15-foot storm surge brought on by Haiyan. It left bodies strewn about in its wake.

“I came with them, my three children and a companion,” said the 35-year-old Manos, carrying her 3-year-old daughter. “And my other child, she died because the water went up so high … she was not even buried because there are no coffins there.”

Her 8-year-old son said: “The water was so high. It was so high,” as he put his arm up to indicate the flood’s depth.

Manos said she decided to come to Manila because none of the food packs being distributed had made their way to her neighborhood. Her husband was living in Manila for work, but he did not even know she had arrived because her cellphone got clogged with water. Reporters helped her contact her husband and were trying to arrange for a ride.

Philippine President Benigno Aquino said Nov. 13 he expected the death toll to be around 2,500 — lower than initially predicted. That morning, the government put the death toll at 1,833; of those, 1,300 were in Leyte.

The same day, Rene Almendras, the president’s Cabinet secretary, said all national roads leading to the island provinces of Leyte, Samar to the east and nearby Biliran were open and passable. Provincial bus service also was back online, and airports had been opened. At least two of those would be hubs for receiving relief goods.

But the government was still dealing with the enormity of the tasks at hand. In one case, the sheer volume of the goods arriving made it necessary for peace and order officers originally assigned to clearing operations to be baggers of care packages. Bodies continued to turn up, and Almendras said some locations did not have enough body bags.

Jesuit Brother James Lee, head of the Church That Serves the Nation, the social justice arm of the Philippine Jesuit province, said Nov. 12 that hungry Filipinos were blocking aid trucks, demanding food to let them pass. He said his organization’s relief efforts would involve coordinating to make sure the food arrived safely at its destination.

Taking the massive need and the work to meet it into account, Father Gariguez said, “As a church this is part of our ministry … we are doing this as part of our mission: to help the poor and the vulnerable. So we are really happy to be of help and to contribute whatever we can to ease the life of our people who are really very much burdened by this disaster.”

NEXT: Italian prosecutor says mafia would like to hurt the pope