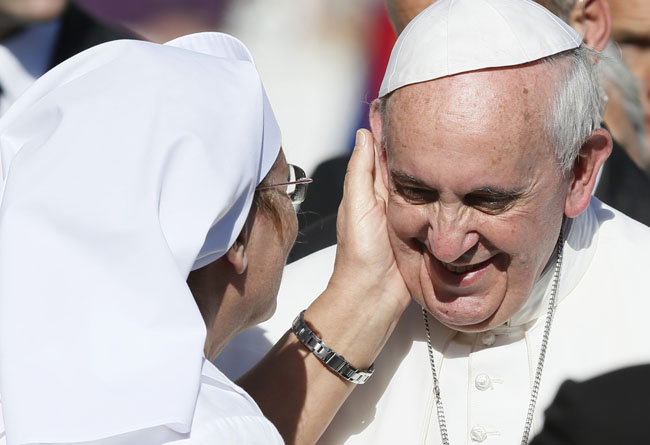 Being part of the church means sharing “spiritual goods — the sacraments, charisms and charity” — including by helping someone or praying for those in need, he said Nov. 6 at his weekly general audience.

Returning to the theme of “the communion of saints,” which he spoke about at his audience Oct. 30, Pope Francis said it not only refers to the bond existing between church members living and dead, but also refers to the bond of unity and sharing that should mark the life of Christians on earth.

The pope told the estimated 50,000 people in St. Peter’s Square that before the audience, he had met Noemi and her parents. Despite her illness, “she smiled,” he said.

“Let’s perform an act of love. We don’t know her, but she’s been baptized — she’s one of us, a Christian,” he said, leading the crowd in a moment of silence and then the recitation of the Hail Mary.

Passionist Father Ciro Benedettini, assistant director of the Vatican press office, told reporters the pope had met the baby and her parents at his residence.

Vatican Radio interviewed her father, Andrea Sciarretta, who said his daughter has spinal muscular atrophy. The family, he said, was invited by the pope to visit the Vatican, pray with him, spend the night and share their meals with him.

Sciarretta and his wife have been in the news in Italy because of their efforts to persuade doctors to allow Noemi to be treated with a new, largely untested and unapproved stem-cell treatment.

Solidarity in action and in prayer is an “integral part of communion among Christians,” the pope said in his audience talk. “If we live this, we are sacraments of God’s love in the world.”

The sacraments, he said, are not simply rituals. Jesus is present in them and the Holy Spirit pours out grace through them, “increasing in us a strong and joyful faith, a faith able to marvel at the wonders of God and to resist the idols of this world.”

“This is why it is important to receive Communion, to baptize babies early, to get confirmed,” he said. The sacraments increase “the presence of Christ in us, which helps us.”

“It is important, when we know we’ve sinned, to go to the sacrament of reconciliation,” he said, adding that he knows some people are afraid of the priest’s reaction. “He won’t wallop you,” the pope said. “In the sacrament, you will encounter Jesus, Jesus who will forgive you. Jesus is waiting for you there.”

As for charisms, Pope Francis described them as “attitudes, inspirations and interior promptings” that are given to an individual for the good of the whole church and increase the unity of the church.

“If a charism is used for self-affirmation,” he said, “it’s doubtful that it’s an authentic charism or that it’s being lived faithfully.”

But, the pope said, love is the key to discerning authentic charisms and to increasing Christian unity.

“Without love, no gift is useful,” he said. “Where there is no love, there is a void filled by egoism.”

At the same time, he said, “even the smallest act, when done with love, benefits all.”

The charity that should reign among Christians isn’t “that nickel and dime charity that we offer occasionally, but something deeper: a communion that makes us able to enter into the joy and the sorrow of others and sincerely make them our own,” he said.

“Too often we are arid, indifferent and detached, and rather than transmitting brotherhood, we transmit discontentment, coldness, selfishness,” he said.

“Can you help the church grow that way?” the pope asked the crowd. The people shouted, “No,” and he told them, “the church grows only with love.”

PREVIOUS: Officials say family synod to be based on doctrine, not public opinion