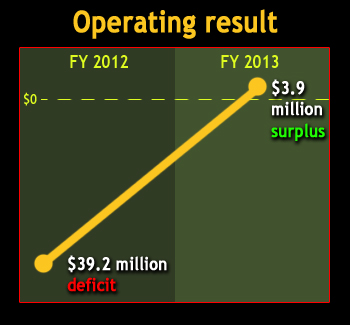 The latest audited financial statements for Archdiocese of Philadelphia show a dramatic turnaround in church finances with a reported $3.9 million surplus for the 2013 fiscal year, up from the $39.2 million deficit reported for fiscal year 2012.

The accounting firm Grant Thornton audited the financial statements and dated their opinion Nov. 22. The archdiocese released the information Dec. 5. 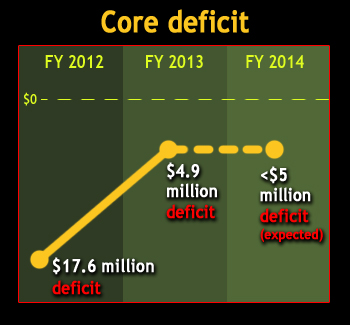 “Since my arrival in Philadelphia, we’ve worked hard to be transparent about the financial health of our local Church,” Archbishop Charles Chaput said in a statement. “We’ll continue to do so.

“I’m pleased to relate that our actions are beginning to have the much needed effect. Today, we’re releasing our financial report for the fiscal year that ended on June 30, 2013. It shows that we’re making significant progress in some areas and that we still have a long way to go in others.”

While the steep climb out of last year’s deep deficit into surplus may encourage Catholics in the five-county archdiocese, an analysis offers further insight.

The $3.9 million “operating result” is a reported surplus that the financial statements call a “change in net assets before other items.” The figure includes several non-recurring transactions so a “core deficit” remains, though not nearly as severe as in the previous fiscal year.

During an interview with CatholicPhilly.com Dec. 4, archdiocesan Chief Financial Officer Timothy O’Shaughnessy explained a supplemental document the archdiocese produced along with the audited financial statements that analyzes those non-recurring items. They include one-time credits and charges that together tell a more accurate story of the archdiocese’s financial results for fiscal year 2013, which ended June 30 of this year.

He pointed to gains on the sale of real estate over the past year ($10.3 million), a gain from the sale of the former priests’ retirement villa in Ventnor, N.J. ($2.7 million), a contribution from the Office of Catholic Cemeteries ($2 million), and smaller amounts such as an insurance recovery of funds embezzled by former CFO Anita Guzzardi ($700,000) and a gain on investments ($500,000).

Also included in the analysis were non-recurring charges such as an increase in the reserve for loans from the Trust and Loan Fund ($1.9 million), one-time pledges and subsidies ($2.9 million) and legal and professional fees ($1.1 million).

In addition to these one-time credits and charges is depreciation expense of $1.5 million, resulting in a recurring or “core deficit” of $4.9 million for fiscal year 2013.

O’Shaughnessy cited this figure as the fairest assessment of the archdiocese’s current financial operating result and compared it to the core deficit of $17.6 million in fiscal 2012.

“To go from a massive $39 million deficit to a posted $3.9 million surplus is good,” he said. “When we talked about fiscal 2013 in June 2012, we expected that our run rate,” referring to the core deficit, “was probably in the range of $6 million. So I’m pleased that the end result was even a shade better than that.

“We’re still not operating at a break-even level but I expect that fiscal ’14 should show some improvement over fiscal ’13.”

Eliminating the $4.9 million core deficit remains a focus for the CFO, who began working on the problem of the poor financial condition of the archdiocese after he was hired by Archbishop Charles Chaput in April 2012.

“At $18 million it’s out of control. Under $5 million – I’ll feel better when it is zero – it’s closer to manageable,” O’Shaughnessy said. “The deficit is still beyond a level of comfort but it’s been moderated such that we can manage it on a cash basis a short while longer if we continue to do a good job collecting old balances due.”

In the case of the non-assessment billings, those costs have already been paid by the archdiocese in some cases years ago but not reimbursed by parishes and archdiocesan entities.

The archdiocesan Office for Financial Services expects only to collect only $7 million of the outstanding total.

But at least one sign in the financial statements shows that the collection rate is improving.

O’Shaughnessy pointed to the positive effect on the archdiocese’s bottom line from significant belt tightening since June 2012. Some of the steps included layoffs of a quarter of the archdiocesan workforce, curtailing of centralized ministries and other measures.

Not included in this year’s operating result are several large, one-time charges that impacted fiscal year 2012. They include $13 million for an increase in the archdiocese’s self-insurance reserve, about $9 million for a loss related to refinancing archdiocesan debt and almost $12 in legal and professional fees. For 2013, those latter fees amounted to little more than $1 million.

“We still have the four large underfunded balance sheet obligations,” O’Shaughnessy said of large debts including the Trust and Loan Fund, which saw a debt of $79.8 million, down from $82 million in 2012. Remaining roughly at last fiscal year’s level is the Insurance Fund which is underfunded by $30.4 million. The Priests’ Pension Plan is estimated to be underfunded by $92 million.

The fourth is the Lay Employees’ Retirement Plan. In November the archdiocese announced it would address a $142 million shortfall (as of June 30, 2013) in the plan by freezing it effective June 30, 2014. O’Shaughnessy said the archdiocese will continue to fund the plan and estimated it should be fully funded “over the next 20 to 30 years.”

“The other three are really dependent on when we can get transactions closed,” he said. “So for example, the first big part of that fix will be when we close the cemeteries transaction.”

An agreement announced in September to lease the Catholic cemeteries to Levittown-based StoneMor Partners features an up-front payment of $53 million for the archdiocese. O’Shaughnessy said he expected $30 million of the payment will go toward the Trust and Loan Fund and the balance toward the priests’ pension plan and self-insurance fund.

“Those remaining balance sheet problems are only going to get fixed by way of transactions,” he said. 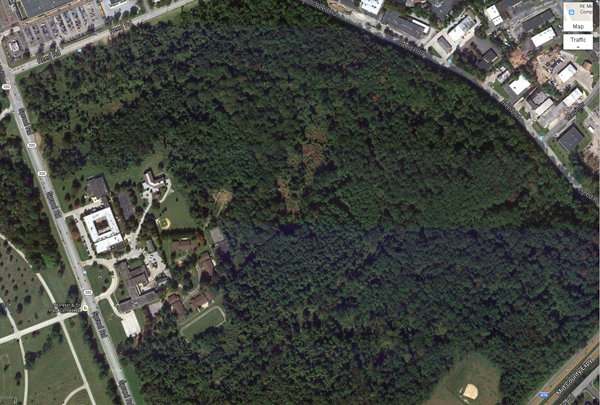 An aerial view of the 217-acre property occupied by Don Guanella Village shows its location on the left of the image along Sproul Road in Springfield, Delaware County. Don Guanella provides residential services and day programs for people with developmental disabilities. It plans to offer its services in group-home settings after the property is eventually sold. (Google Maps)

Besides the news in August that the archdiocese was marketing its six nursing homes and one assisted living facility for sale, a 217-acre tract in Springfield, Delaware County that has housed Don Guanella Village for decades also is being marketed for sale, O’Shaughnessy said.

But even after an agreement for sale is announced, the buyer could face lengthy delays over questions of zoning or other hurdles. “It could be two to three years before we get to ultimate closing on that,” O’Shaughnessy said. “That is a transaction that could help us fix the balance sheet.”

The long-term issues appear likely to take several years to resolve. But the CFO expects continued efforts in the short term to reduce the core deficit.

He is hoping for “beneficial support from the Catholic Foundation” of Greater Philadelphia, a new organization separate from the archdiocese announced in September.

Also helping on the income side in the short term may be the sale of other smaller archdiocesan properties. One small parcel, a former convent and adjoining parking lot at the Archdiocesan Pastoral Center in center city Philadelphia, is no longer for sale at this time.

As for whether the archdiocese might expand ministries such as outreach to youth, response to ethnic and cultural groups, evangelization efforts or Catholic publications, O’Shaughnessy cautioned that new growth cannot take place while the archdiocese still operates with a deficit.

“Unless we get specific dedicated funding for those types of things, while we’re operating at a deficit, we can’t add those types of programs,” he said. “Our operating result can’t support it.”

NEXT: Catholic women celebrate their gifts together at Convention Center