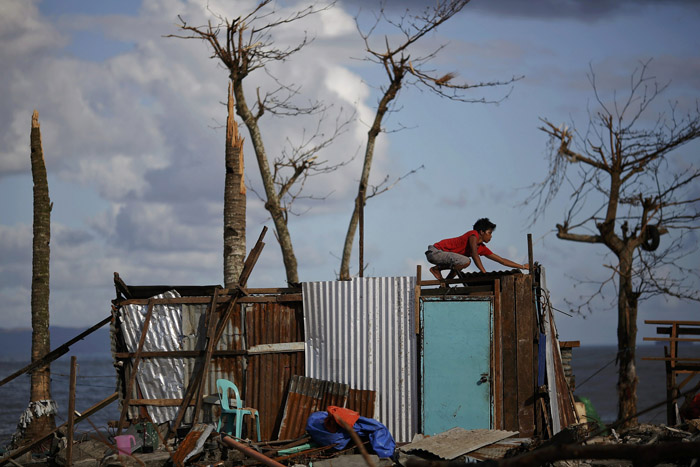 A man repairs his house, which was damaged by Typhoon Haiyan, at a coastal area south of Tacloban Nov. 16. Rebuilding in typhoon-ravaged regions of the Philippines is expected to take up to five years, a Catholic Relief Services official said at a Dec. 3 congressional hearing. (CNS photo/Damir Sagolj, Reuters) 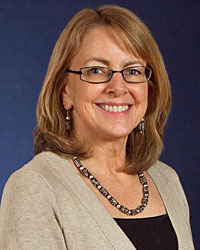 The story of the super typhoon that devastated the Philippines in early November has already moved off the front pages of newspapers and perhaps from the minds of people in the United States. But Joan Rosenhauer sees the relief and rebuilding efforts on the island nation just beginning.

The executive vice president of U.S. operations for Catholic Relief Services visited the Philadelphia Archdiocese Nov. 21, which hosts the CRS regional office in Radnor, Delaware County. That office coordinates activities of CRS throughout the mid-Atlantic and Northeast U.S.

Now four weeks after the storm hit the Philippines, aid from CRS and partners such as Caritas Philippines has met the most acute needs of residents in the form of water, food, soap and towels.

But the needs remain daunting, to say the least. Rosenhauer cited an estimate that 11.8 million people in the Philippines had been affected – the combined populations of Los Angeles and New York City.

CRS knows how to begin the massive relief effort because it has have been working in the country since 1945 and today has about 100 staffers there, mostly Filipinos, plus 28 other personnel brought in from other countries in which CRS works.

One benefit of a long-term presence in a country is the relationships made with local communities through the churches, so that the needs of the community are well understood, Rosenhauer said.

“We’ve been in the Philippines for many years so when the predictions of the typhoon began  we began to prepare and even going ahead into the disaster zone ahead of time to be prepared to respond as quickly as possible,” she said.

CRS has devoted existing funds toward the initial disaster relief even as local collections in the United States began to ramp up.

A collection for Philippine relief was taken up in parishes of the Philadelphia Archdiocese at weekend Masses Nov. 23-24. The archdiocesan Office for Financial Services reported as of Dec. 4 that $146,600 had been collected. A more complete figure is expected by the end of December.

“People are being very generous,” Rosenhauer said. “We’ve collected about $10 million at this point just in individual donations” even before the parish collections had begun. “Governments around world are offering funds, and we’ll be applying for some of those funds as well.”

The rebuilding is beginning slowly. Since about 650,000 homes were destroyed or damaged beyond repair, shelter is a major concern. CRS is deploying 40,000 A-frame shelters that it designed through experience with such disasters in the world.

In one of the hardest hit areas, Tacloban on the island of Leyte, “the public water system is back up,” Rosenhauer said. “What that allows us to do is to think about the next step; think about rebuilding.”

The current situation in the Philippines illustrates well the two-fold mission of CRS to provide emergency disaster relief and ongoing international poverty relief and development.

Founded in 1943 by the U.S. Catholic bishops to assist with the refugee crisis in Europe following the destruction and displacement of World War II, CRS today works in 91 countries.

Rosenhauer said that besides emergency relief, CRS is focusing its efforts on agricultural development and strengthening health care systems.

For the former, CRS helps farmers use inexpensive cell phones to give farmers real-time data on optimal conditions in commodity markets. Subsistence farmers even in remote areas learn when and where certain crops will earn the highest prices at market, and when crops should be held until prices improve. The farmers also learn techniques that help them increase the yield of their crops.

“Villages will go from being food insufficient for much of the year to having plenty of food to feed their own village for the full year, with a farmer having extra to sell and have money to support school fees and so forth,” Rosenhauer said.

While CRS can set up health care clinics and bring in health professionals, “we don’t want communities to be dependent on CRS coming in to help them provide health care forever,” she said. “We want to build their capacity to provide world-class health care in their own countries.”

She described a CRS effort to help the Catholic Church in Haiti to rebuild a Catholic hospital heavily damaged by an earthquake in 2010. But the aid was not just to build the facility as it had been.

“It’s a world-class hospital and also a teaching hospital,” Rosenhauer said. “We’re helping to train health care professionals in Haiti, and we’re doing that in other parts of the world as well.”

Another development project she is particularly proud of was in a village of Ethiopia where girls walked up to eight hours a day to obtain water for their families. The four-hour, one-way trip is a thing of the past now thanks to a CRS project that called for terracing a hillside so that rain water would not run off but seep slowly into the groundwater table. It is then piped into the village where it may be obtained easily and used for field irrigation.

CRS not only works with people in far-off lands, but close to home in parishes and homes. The organization offers resources to parishes to become more aware of global poverty and how to get involved in development efforts.

Families too can participate in programs like CRS Rice Bowl during the Lenten season. Rosenhauer pointed out that 25 percent of money raised from the long-standing and popular program stays with the local community. In the Philadelphia Archdiocese, the funds support Nutritional Development Services’ work to stock local food pantries through the Community Food Program.

“We consider it a privilege to represent the Catholic community in the United States in carrying out this important mission that is a part of the Gospel call and the call of our baptism,” Rosenhauer said. “We express our gratitude and invite (people) to continue to be part of this mission and see us as a resource through which they can bring a commitment to people in greatest need around the world.”

PREVIOUS: 2012-2013 Audited Financial Statements of the Archdiocese of Philadelphia