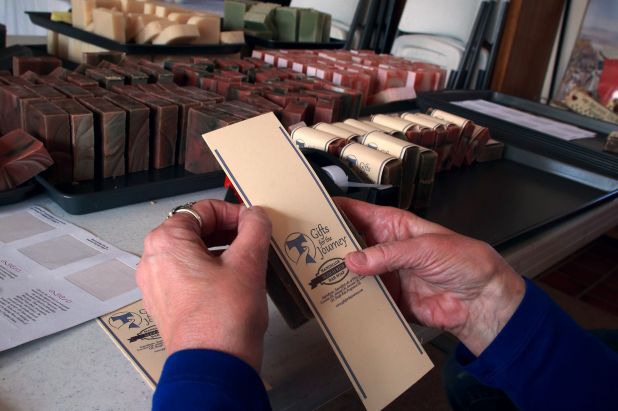 MILWAUKEE (CNS) — Soothing aromas of peppermint, lavender, gingerbread and lemon verbena waft through the hallways of the Franciscan Peacemakers headquarters in Milwaukee.

The comforting, inviting smells coming from the piles of handmade soap bars, waiting to be wrapped with “Gifts for the Journey” labels, are a sharp contrast to the tough, harsh ways of the organization’s neighborhood.

Outside, poverty is evident, with boarded-up homes and littered roadways. Franciscan Peacemakers, located inside St. Martin de Porres Church, is an oasis, a safe haven from the streets.

The sale of the soaps, bath teas and bath “bombs,” a fizzy mixture for soothing baths, is a business venture, intended to raise money for Franciscan Peacemakers and its mission. But the products also are symbolic of the work taking place at the church.

Franciscan Peacemakers, founded 18 years ago by two Capuchin priests, Fathers Robert Wheelock and Michael Sullivan, is an outreach to women, men and children who engage in prostitution on the streets of Milwaukee.

The current heads are Deacon Steve Przedpelski, director, and Carmen Mojica, a certified social worker. They drive around the surrounding neighborhoods where street prostitution is active. They try to meet people’s basic needs, offering food, first aid and personal care items. Perhaps more importantly, they listen to their stories, often tales of sexual abuse as children and feelings of being unloved and feeling hopeless.

Deacon Przedpelski, a deacon at St. Gabriel Parish in Hubertus, took over the ministry 12 years ago when the Capuchins left. Within a year, he hired Mojica and the two make daily rounds in their “office,” a white 2004 Ford Freestar van with 302,000 miles on it. The name “Franciscan Peacemakers” is printed boldly on the side. Mojica also coordinates a regular support group for the women.

While they know they are making a difference in the lives of the women they meet, Deacon Przedpelski admitted he struggled with feeling they could do more.

A visit three years ago to Thistle Farms & Magdalene, a similar ministry started by an Episcopal priest in Nashville, Tenn., impressed him. But he realized it can tap the deep pockets of Nashville’s country music circle.

“I was reluctant to venture into something like this because how would we build the type of capital to build this kind of program,” he told the Catholic Herald, which covers the Catholic community in southeastern Wisconsin.

But when one of Peacemakers’ former clients “who by all appearances was doing really well” committed suicide on Good Friday 2012, Deacon Przedpelski felt compelled to do more.

“Not from the standpoint that we could have prevented (the suicide), but the whole thing got me thinking, what we were offering wasn’t enough. What more could we do?” to offer life-transforming skills, he said.

Gifts for the Journey, a bath products venture, was born. Funds from sales will help support Clare Community, a homelike environment that will house three women by mid-January, Deacon Przedpelski hopes.

Clare Community will feature a shared kitchen and living space for three women who enroll in its two-year program. Mojica, who will direct Clare Community, explained that the program offers healing of the mind, spirit and body. The women who will live in the community must commit to working on an education, must be employed and will complete levels such as novice and postulant prior to graduation.

The women will be employed through Gifts for the Journey, helping with the soap-making process and selling the products at farmers’ markets and parishes.

With no experience in the soap business, Mojica experimented with the first batch of soap. The first batch “did not go so well,” said Mojica, but in the months that have followed, they’ve learned about scents, oils, the cold process with lye and now know what makes a good soap.

Deacon Przedpelski said, as with any new business, he expected to lose perhaps 40 percent during its first year. But income has far surpassed his expectations. He noted proudly that Gifts for the Journey will at least break even, and in fact, might make a little money.

In addition to selling the products online at www.giftsforthejourney.com and at two farmers’ markets, they’ve embarked on the “Franciscan Peacemakers preaching tour.” During visits to parishes, Deacon Przedpelski explains the mission and then they sell the products after Masses.

After 17 years in the ministry, Deacon Przedpelski admitted the work can be depressing.

“Most of the people we work with will die as a result of the streets, and people don’t like hearing that. But we call it a success when we have relationships with individuals,” he said. In an average week, they distribute 400 to 500 lunches — thanks to support from about 40 parishes — and make contact with 20-30 women.

With the advent of Gifts for the Journey and the opening of Clare Community, Deacon Przedpelski has reason to be hopeful.

“I feel like today we’re in a position to make a bigger difference than we have,” he said, adding the business “is going way better than anyone anticipated.”

“Across the diocese, there are people from a wide range of the political spectrum who do this work, because of their belief in the Gospel,” he said, adding that as Pope Francis teaches, they are motivated by following Jesus’ example, not by any political agenda.

Roman is managing editor of the Catholic Herald, a publication serving the Catholic community in southeastern Wisconsin.

PREVIOUS: Response to ‘On Eagle’s Wings’ over the years humbling for composer

NEXT: Courts give some last-minute relief from HHS contraceptive mandate