Minn. Archbishop steps down from public ministry after allegation 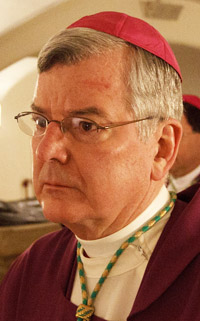 St. PAUL, Minn. (CNS) — Archbishop John C. Nienstedt of St. Paul and Minneapolis is voluntarily stepping aside from all public ministry, effective immediately, while St. Paul police investigate an allegation that he inappropriately touched a male minor on the buttocks in 2009 during a group photography session following a confirmation ceremony.

In a Dec. 17 letter to Catholics of the archdiocese, Archbishop Nienstedt called the allegation “absolutely and entirely false.”

“I have never once engaged in any inappropriate contact with a minor and I have tried to the very best of my ability to serve this archdiocese and the church faithfully, with honor and due regard for the rights of all, even those with whom I disagree,” he said.

“True, I am a sinner, but my sins do not include any kind of abuse of minors,” he said. “I have met victims and I know the lasting damage that such abuse causes.”

Auxiliary Bishop Lee A. Piche, in his role as a vicar general, will cover all of the archbishop’s public duties while the matter is being investigated, according to a Dec. 17 statement from the archdiocese. Father Charles Lachowitzer continues in his position as a vicar general and moderator of the curia.

“The archdiocese is mindful of the due process concerns of those involved,” the statement said. “There must be justice and due consideration of the rights and dignity of every human person, both the individual involved and the archbishop. This is not only the bedrock of our beliefs as Catholics, but also of the justice system of our country.

“The steps taken in response to the allegation against the archbishop demonstrate and reaffirm the archdiocese’s commitment to disclosure.”

In his letter, Archbishop Nienstedt said the identity of the person who made the allegation has not been made known to him.

The archbishop pointed out that he normally stands for confirmation photos “with one hand on my crozier (staff) and the other either on the right shoulder of the newly confirmed or on my pallium (the short stole), which hangs from my chest. I do that deliberately and there are hundreds of photographs to verify that fact.”

Archbishop Nienstedt’s column in the current issue of The Catholic Spirit, the archdiocesan newspaper, will be his last until the investigation is complete.

“I hope that the investigations can be thorough but quick,” he wrote in his letter. “I already long to be back in public ministry — to be able to serve as the Lord has called me to serve.”

“These days will give me the time to pray for you and the individual involved,” he added. “I ask that you pray for me too.”

In its Dec. 17 statement the archdiocese again urged those who have been a victim of sexual abuse by someone in church ministry or know someone else who has to call the police or other civil authorities.

Two days earlier at Our Lady of Grace Church in Edina, at the invitation of the pastor, Archbishop Nienstedt apologized for the archdiocese’s handling of clergy sexual abuse allegations in a homily delivered at two Dec. 15 Masses at the parish church.

“I am here to apologize for the indignation that you justifiably feel. You deserve better,” he said.

On Dec. 5 The Catholic Spirit published the names of 30 priests for whom credible allegations of abuse had been reported after the archdiocese gained court permission to release the names.

In November, the archdiocese announced that it had hired the Los Angeles-based firm of Kinsale Management Consulting to review clergy files as part of an archdiocesan plan to take a comprehensive approach to addressing the issue of clergy sexual misconduct.

In other actions, Archbishop Nienstedt appointed Dominican Father Reginald Whitt as archdiocesan vicar for ministerial standards. He has full responsibility for all issues related to clergy sexual misconduct. Also in place is a newly formed Safe Environment and Ministerial Standards Task Force.

NEXT: Judge says employer objections to HHS mandate based on religious rights