Supreme Knight honored for his efforts to advance Marian devotion 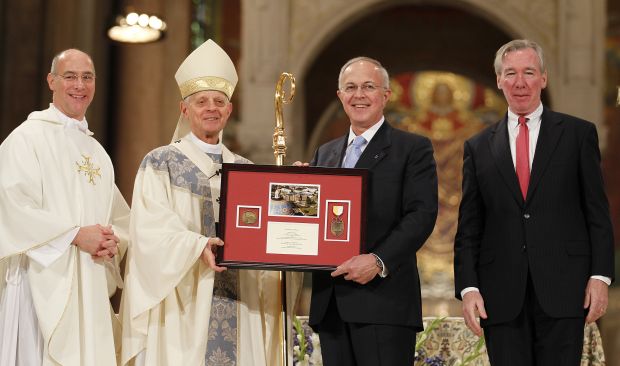 Msgr. Walter Rossi, rector of the Basilica of the National Shrine of the Immaculate Conception, Cardinal Donald W. Wuerl of Washington and, at right, John Garvey, president of The Catholic University of America, present Supreme Knight Carl A. Anderson of the Knights of Columbus with the Patronal Medal at the shrine in Washington Dec. 9. or general appreciation of the place of Mary in the life of the Catholic Church. (CNS photo /Bob Roller)

WASHINGTON (CNS) — Supreme Knight Carl A. Anderson Dec. 9 received the Patronal Medal, an honor jointly bestowed Washington’s Basilica of the National Shrine of the Immaculate Conception and The Catholic University of America.

The award — presented on an occasional basis since 1974 — is given to someone “who has rendered distinguished service in the advancement of Marian devotion, theology or general appreciation of the place of Mary in the life of the Catholic Church.”

The head of the Knights of Columbus received the medal during Mass at the national shrine.

Noting the Knights of Columbus’ donations to the national shrine — including the bell tower, the Incarnation Dome and many man-hours of volunteer service — Cardinal Wuerl said that the basilica “tries to make visible everything that the words of sacred Scripture have proclaimed for us today” and “helps us see the transcendent, the spiritual, the supernatural.”

In presenting the Patronal Medal, Msgr. Walter R. Rossi, the shrine’s rector, said that Anderson “exhibits filial devotion to Our Lady and promotes in his personal life and order-wide the important place the Blessed Virgin Mary holds in the life of faith.”

“He and the Knights of Columbus have been stalwart supporters of the national shrine for many years,” Msgr. Rossi said.

He noted that “through the gracious cooperation” of Anderson, “the Knights of Columbus usher program continues to flourish, the Mass is brought from the national shrine by television to those confined to their homes, and with the addition of the Knights of Columbus Incarnation Dome, the completion of the shrine’s Great Upper Church moved closer to becoming a reality.”

John Garvey, president of The Catholic University of America, said Anderson “has dedicated his life to serving the Church and our nation” and is a “wonderful supporter” of the university.

“Under his leadership, the Knights of Columbus have touched the lives of countless people around the world … his strong faith and devotion to Mary underpin all that he does,” Garvey said of Anderson.

In accepting the medal, Anderson said the award “is an occasion to recognize the dedication of so many countless Knights of Columbus to the national shrine.” He called it “a privilege and honor” to work with the shrine “for the honor of serving the Mother of Our Lord.”

Noting that the “United States and its future is in the loving hands of Mary,” Anderson prayed that “through the powerful intercession of Mary, it will always be safe.”

During the Mass, Cardinal Wuerl encouraged Catholics to look to Mary as “the model of faith and how we are to respond to God’s plan, to live in faith and to be totally embraced in God’s love.”

He said “the church lifts Mary as the example of what our faith should be. Mary says to us, ‘Even if I don’t understand, I can say “yes” to God.'”

“The Virgin Mary is the supreme model of faith — true, profound, self-giving faith,” Cardinal Wuerl said. “If you want to truly be a child of God, follow her (Mary’s) example.”

PREVIOUS: Bishops back bill to limit some gun sales