Volunteers say in Peace Corps they learned about universality of church 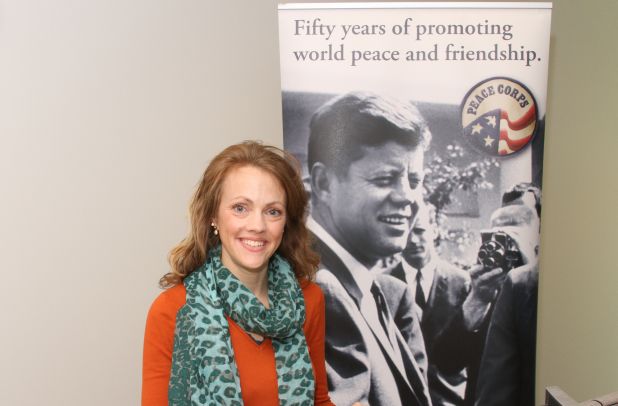 Monica Oliver, who served in West Africa's Republic of Mali with the Peace Corps from 2000 to 2002, poses near an image of President John F. Kennedy in Atlanta Nov. 14. (CNS photo/Michael Alexander, Georgia Bulletin)

ATLANTA (CNS) — In the beginning, Monica Oliver figured with her college education and her upbringing in the United States, she’d help transform a poor community.

The Jesuit-educated Oliver was a Peace Corps volunteer living in Mali. She worked with women entrepreneurs in the West African country to start small businesses. But looking back, she knows it was the community that transformed her.

“I gained a lot of perspective on love, and human beings, and how to be a decent person,” she said.

In Mali, greetings matter. A perturbed postmaster once withheld her mail for weeks when he felt she was rude to focus on checking her mailbox without talking to him.

“The experience put me in my place and to this day it serves as a reminder to me that it does not pay to be too busy or self-important to ask after another person’s well-being,” she told The Georgia Bulletin, Atlanta’s archdiocesan newspaper.

Oliver and others recalled fondly being stationed in developing countries as they served in the Peace Corps. The experience revealed the world to them and opened their eyes to the global church.

The Peace Corps is one of President John F. Kennedy’s uplifting legacies. Former volunteers talked about their life-changing experiences as the country marked the 50th anniversary of his assassination Nov. 22, 1963.

Oliver’s Catholic faith spurred her to join the Peace Corps out of a desire to serve others. It was in the Muslim country of Mali she learned a deeper way to live her faith.

“It’s just like that part of the prayer of St. Francis: ‘It’s in giving you receive.’ I’m the one who received,” she said.

Oliver’s project from 2000 to 2002 focused on microfinance. A $25 loan would be enough for women to open a business. She laughed at how the project was assigned to her despite her knowing little about banking. She majored in romance languages at Loyola Marymount University in Los Angeles.

Oliver, now 39, attended Mass when she could but found other ways to practice the faith. In a predominantly Muslim country, she didn’t live it “very loudly.”

“Catholic with a small ‘c’ means universal. Some of it was, some of it wasn’t” about practicing her faith, Oliver said.

“Living the Gospel, it all comes from within. It doesn’t matter what context you are in. You can be a person for others no matter where you are,” said Oliver, who attends St. Thomas More Church in Decatur.

Kennedy’s challenge to the country in his 1961 inaugural speech — “Ask not what your country can do for you. Ask what you can do for your country” — launched a new approach to public service, with the Peace Corps as well as Volunteers in Service to America, known as VISTA, and other vehicles for volunteer service.

Catholics responded to the call, along with hundreds of thousands of other Americans. In the last 52 years, more than 215,000 Peace Corps volunteers and trainees have served in 139 countries around the world.

Students at Catholic colleges have embraced the opportunity to serve. Jesuit-run Gonzaga University in Spokane, Wash., ranked in 2012 first among small schools on the Peace Corps’ list for producing the most volunteers for international service. Four Catholic schools, topped by Boston College, ranked in the top 25 among medium-size schools. A small school and medium school have an enrollment of less than 5,000 and less than 15,000, respectively.

Kathy Parker, like many of her fellow students in the mid-1960s at Nazareth College in Rochester, N.Y., was “very inspired by Kennedy.”

Parker served in Ivory Coast, West Africa, for two years starting in 1965, in a community of 3,000. She was assigned to health education, especially to curb infections of Guinea worms. For Parker, her Peace Corps experience set the foundation for a career in public health. She has been a leader in the AIDS Ministry program at Immaculate Heart of Mary Church in Atlanta.

Jim Sheahan, of All Saints Church in Dunwoody, was one of the early volunteers, serving from 1961 to 1963 in Sierra Leone. He worked on programs for secondary school students. Sheahan said his faith motivated him to join the Peace Corps.

“I viewed it as an important opportunity for me to devote my time and effort to working with students and the local neighborhood in improving their way of life,” he said.

“The Peace Corps is indeed one of the most visible and lasting legacies of President Kennedy. His youthful appearance and enthusiasm inspired me to volunteer in what I viewed as a great opportunity for me to help less fortunate people help themselves,” Sheahan said.

Marie Shockley, 75, retired from the federal government and joined the Peace Corps. She served in Namibia, from 2002 to 2004. She said it was “a continuation of my faith.”

Shockley is involved with several ministries at Holy Family Church in Marietta, including the Society of St. Vincent de Paul and Habitat for Humanity.

“I think JFK was a man of vision and compassion, which is rare, especially for those who are so privileged,” she said. “I still mourn his death, and loss to us all.”