Cardinal: For pope, church reform is spiritual exercise, not a project 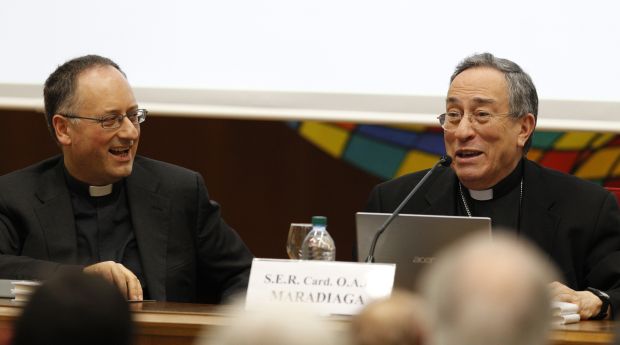 VATICAN CITY (CNS) — For Pope Francis, the reform of the Catholic Church and its structures “isn’t a project, but an exercise of the Spirit” that will take time, said Honduran Cardinal Oscar Rodriguez Maradiaga of Tegucigalpa.

The cardinal, coordinator of Pope Francis’ Council of Cardinals, which is working on the reform of the Roman Curia and advising him on church governance, spoke about the pope and his approach during a Dec. 4 book presentation at the Vatican.

Other cardinals on the council were in attendance as well for the presentation of Jesuit Father Antonio Spadaro’s book, “La Mia Porta ‘E Sempre Aperta” (“My Door is Always Open”), an expanded version of the interview with Pope Francis published in Jesuit periodicals around the world in September.

Cardinal Rodriguez Maradiaga said the title of the book could well be the main theme of Pope Francis’ pontificate.

“The theme of open doors is central to the preaching of Pope Francis,” he said, and signifies an attitude of trusting and welcoming others, but also — as far as church doors go — refers to the pope’s insistence that parishes welcome people in and let the Gospel out into the world.

The cardinal said Father Spadaro’s interview and the book, which gives more details about their conversation, explains what the priest found on entering the pope’s house: “First of all, that which he brings as a Jesuit,” including his focus on mission, community and discipline.

The pope, he said, “defines his role as being a guardian, like St. Joseph,” watching over the church “not as a policeman, but as a father.”

“A pillar of the pope’s spirituality is discernment,” a frequent topic in the writings of Jesuit founder St. Ignatius of Loyola and one which aims at a prayerful reading of reality and gathering opinions before making a decision, the cardinal said. It is an instrument “for knowing the Lord better and following him more closely.”

Jokingly insisting that the Council of Cardinals is not Pope Francis’ “G-8” group, but his “C-8” cardinals, he told the audience that “discernment takes time.”

“Many, for example, think changes and reforms can happen quickly” in the church — “that’s what they’re expecting of us” — but, as the pope told Father Spadaro: “We always need time to lay the foundations for real, effective change. And this is the time of discernment.”

Pope Francis, Cardinal Rodriguez Maradiaga said, is open and always scanning the horizon, prayerfully considering how he can follow Christ more closely and encourage others to do the same.

“In this context, you can understand his reform of the church, which isn’t a project, but an exercise of the Spirit,” he said.

PREVIOUS: Pope calls for prayers for kidnapped nuns, all people abducted in Syria