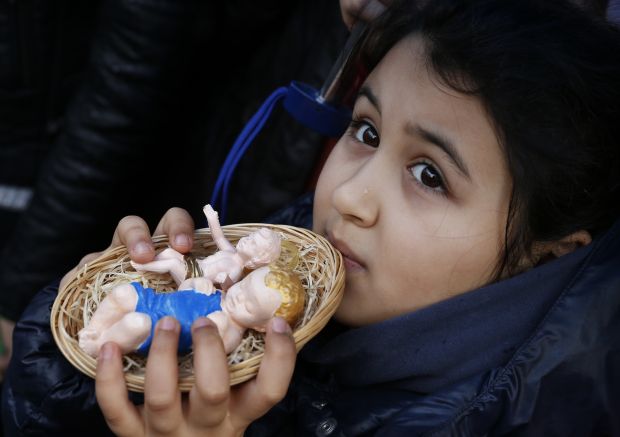 A girl in St. Peter's Square holds baby Jesus figurines for Pope Francis to bless during his Angelus at the Vatican Dec. 15. Children observed an annual tradition by bringing their Nativity figurines for the pope to bless. (CNS photo/Paul Haring)

VATICAN CITY (CNS) — Sadness is a sign of being far from Christ because Jesus offers everyone the strength to persevere with hope and joy, Pope Francis said.

“God is the one who came to save us and offer help, especially to hearts gone astray,” he said before praying the Angelus Dec. 15, Gaudete (Rejoice) Sunday.

“The church is not a refuge for sad people, the church is a house of joy” because the Christian message is “Good News” — “a proclamation of joy for all people,” he said.

Despite the rain, tens of thousands of pilgrims turned out in St. Peter’s Square for the weekly prayer and to have the pope bless the figurines of Baby Jesus that children bring and then place in their Nativity scene at home or at school.

The pope asked the children to remember him when they pray in front of their Nativity scenes just as he remembers them in his prayers.

Before the Angelus, the pope said that no matter how big people’s sins and limits, Christians are not allowed “to be weak and waver before difficulties and our own flaws.”

“On the contrary, we are invited to toughen our hands, steady our knees and have courage and not be afraid because God always shows the greatness of his mercy.”

Perhaps people may think their sins are so great that it is impossible to start over, he said. “You’re wrong. You can. Why? Because God is waiting for you, he loves you,” is merciful and will give the strength needed for a fresh start and to overcome all pain and sorrow, the pope said.

“This true joy even remains during times of trial, suffering, too, because it is not superficial, but lies deep in the person who trusts in God and confides in him.”

Christian joy and hope are grounded in God’s fidelity, “in the certainty that he always keeps his promises,” he said, adding that this joy flows from knowing you are welcomed and loved by God.

Christian joy is found in Jesus Christ’s faithful and boundless love, he said, that is why “when a Christian becomes sad, it means he has strayed from Jesus.”

“However, it’s necessary then to not leave him alone! We must pray for him and make him feel the warmth of the community,” he said.

Before the pope appeared at the window of the apostolic palace, people in the square sang “Happy Birthday” ahead of his Dec. 17 birthday when he will turn 77.

The day before, children and parents he met in the Vatican’s Paul VI audience hall gave him a surprise birthday party marked with singing and a real cake with candles. The children and families use the Vatican’s St. Martha Dispensary, a maternal and pediatric clinic.

The pope first visited the dispensary, which is staffed by volunteers and serves mainly immigrant families, before he met in the audience hall with the families who have been receiving care.

In the hall, a group of children piled large blocks on top of each other to reveal the pope’s picture and the Italian word “Auguri,” meaning “Happy Birthday.”

Another group of kids wearing white T-shirts with a yellow letter printed on each one, assembled themselves to spell out “Happy Birthday, Pope Francis” in Italian.

When presented with the cake, the pope blew out the candles. He joked, “I’ll tell you later if it’s good or not.” He thanked the children for their joy and gifts, which included a sweater.

Rather than giving a talk, the pope spent the audience greeting, holding and blessing the children there. One small boy the pope was holding plucked the pope’s skullcap off his head. The pope laughed and managed to put the cap back.

Also, the Vatican announced Dec. 14 that the director of papal charities was going to distribute phone cards and public transportation passes to the city’s poor.

On behalf of the pope, Archbishop Konrad Krajewski was overseeing the distribution of 2,000 envelopes containing the passes and cards as well as a small Christmas card with the pope’s signature. Each envelope also had a Vatican stamp affixed to it so it could be used in mailing a greeting to friends or loved ones, the Vatican said.

NEXT: Ordaining 31 Legionaries, cardinal says they are part of order’s reform