In clearest statement to date, pope prays for victims of sex abuse 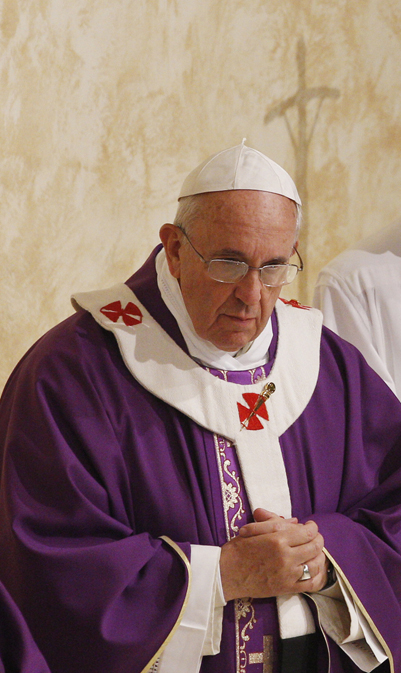 VATICAN CITY (CNS) — In his clearest public reference as pope to the subject of clerical sex abuse, Pope Francis urged bishops to support abuse victims while also reaching out to priests who have “fallen short of their commitments.”

The pope made his remarks Dec. 2 to bishops from the Netherlands making their first visits “ad limina apostolorum” (“to the threshold of the apostles”) since they met with Blessed John Paul II in 2004.

Speaking in French, the pope brought up sex abuse near the end of his talk, in a section devoted to bishops’ care of priests under their authority.

“Like fathers, find the necessary time to welcome (your priests) and listen to them, every time they ask. And do not forget to go out to meet those who do not approach you; some of them unfortunately have fallen short of their commitments. In particular, I want to express my compassion and assure my prayers to all victims of sexual abuse and their families; I ask you to continue to support them along their painful path of healing, undertaken with courage,” the pope said.

It was Pope Francis’ most explicit reference to clerical sex abuse, in public or in a statement released by the Vatican, since his election in March.

According to a 2011 report by a Dutch government commission, as many as 20,000 children may have been abused in the country’s Catholic institutions between 1945 and 1981.

In his remarks to the pope, Cardinal Willem Jacobus Eijk, president of the Dutch bishops’ conference, said the conference had established an independent foundation to assist victims.

“We are determined to recognize the problems of the victims, to compensate them for damages and help them to heal as much as possible,” the cardinal said.

Pope Francis also urged the bishops to promote church teaching on marriage and euthanasia through dialogue with the rest of society in the Netherlands, whose population is approximately 30 percent Catholic.

“In your society, strongly marked by secularization, I encourage you to be present in public debate, everywhere man is involved,” he said.

Pope Francis said the church “is sent everywhere to awaken, reawaken, sustain hope! Hence the importance of encouraging your faithful to seize occasions for dialogue, and be present in the places where the future is decided, so they can contribute to debates on the great social questions, for example, of family, marriage, the end of life.”

The Netherlands was the first country to legalize same-sex marriage, in 2001, and permits physician-assisted suicide.

Cardinal Eijk told the pope that Catholics in the Netherlands have been steadily diminishing in number, and predicted that a “third of the Catholic churches in our country will be closed by 2020 and two thirds by 2025.”