Mexicans pessimistic that reforms will do little to lift economy 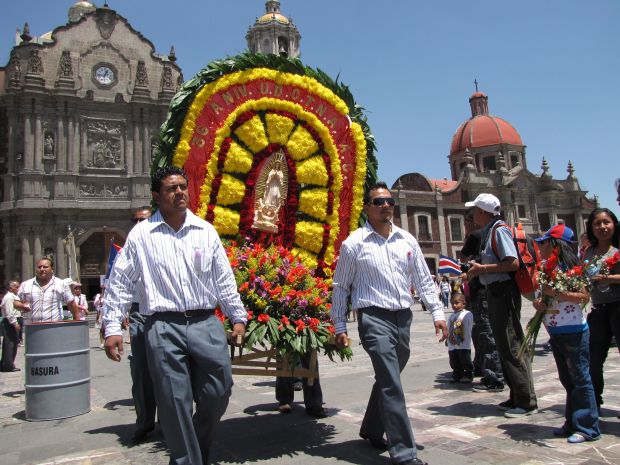 Members of a nonsalaried vendors' association make a pilgrimage to the Basilica of Our Lady of Guadalupe in Mexico City in late March. (CNS photo/David Agren)

MEXICO CITY (CNS) — Shopkeeper Rodolfo Villanueva keeps a close eye on sales at his mom-and-pop store, especially in the fall months, which he has found signal what to expect in the upcoming year.

“Right now, it doesn’t look good,” he said of sales, which were off by 30 percent from the previous year and tend toward soft drinks and cigarettes at his shop near the president’s residence.

“November is usually a reflection of what the next year will be,” he said.

Villanueva is among the many Mexicans expressing pessimism with the country’s economy, which private economists expect to expand by barely 1 percent in 2013 — far from the 3.5 percent projected by the federal government.

The pessimism comes as some economists and foreign investors project a rosier picture for the future of Mexico as manufacturing moves back from China and the country implements recently approved structural reforms in areas such as education, energy and taxation.

While the achievement of reforms excites investors, some priests say the government discourse — which no longer touches on topics such as violence — seems distant from people trying to make ends meet and who are not inclined to make long-term plans.

“There’s a large gap between the government discourse and people’s reality,” said Father Jesus Mendoza, pastor of the St. Nicholas of Bari Parish in Acapulco, where some parishioners make their living through organized crime because better-paying options are scant.

Father Raul Martinez, director of social ministries in the Diocese of Valle de Chalco, a scruffy suburb on the southeastern outskirts of Mexico City, said his parishioners do not care about reforms.

“What they care about being able to eat today,” he said.

The differences were highlighted in mid-December as Congress approved an energy plan that would allow increased private participation in the state-operated oil industry. Petroleum sales account for about one-third of the federal budget.

Analysts and investors greeted the reform with enthusiasm. But it’s a taboo topic in Mexico, where public ownership of petroleum is associated with sovereignty and the expulsion of foreign firms in 1938 is seen as a seminal moment.

“Disgusting,” Bishop Raul Vera Lopez of Saltillo said in mid-December after its approval in Congress.

“We’re going to depend more on foreign powers,” he added in comments indicative of the ingrained thinking of a population raised on a suite of myths that sustained Mexican nationalism and identity for decades.

The reforms reflect a further opening of Mexico’s economy since the North American Free Trade Agreement was implemented 20 years ago. The economy here was once so closed that imported candy bars were sold as contraband. Today Mexico has free trade agreements with more than 40 countries.

Manufacturing has expanded, drawn in part by proximity to the United States and lower costs in Mexico. It’s a point of contention with critics such as Bishop Vera, who complain of “miserable wages,” paid in factories.

Mexico also has become stable in macroeconomic terms with a low debt to gross domestic product ratio and relatively low inflation — unthinkable during the peso crises of past decades.

But poverty has stayed stubbornly high at 47 percent of the population, according to the state statistics agency. Carlos Slim became the world’s richest man after acquiring telephone monopoly Telmex — symptomatic of the increasing inequality in Mexico and tendency for companies to collude or stop competition instead of competing.

The Mexican middle class grew by just 4 percentage points between 2000 and 2010 to slightly more than 39 percent — less than other Latin American countries, which prospered selling commodities to places such as China.

The expansion was celebrated in some circles as a sign of advancement as people purchased cars, cellphones and homes. But Father Martinez expressed concern, especially with households buying televisions at 80 percent interest rates and the levels of debt being assumed.

He expressed even more concern with the nearly 60 percent of the population working in the informal economy, in which no taxes are paid or benefits offered.

“Informal commerce is designed so you can eat today, not tomorrow,” said Father Martinez, whose parishioners mostly work as housekeepers, vendors and construction workers in nearby Mexico City.

Complaints of rising prices and salaries not keeping pace are common in Mexico. A monthly increase in the government-set and subsidized price of gasoline of less than a penny per liter brings scandalous headlines and complaints, even from people who do not own cars.

Miguel Angel Riva Palacio hears complaints constantly from customers at his dry cleaning shop near the president’s residence over the $2.50 he charges per garment.

“Out of every 10 people, three or four have no problem. For the rest of them, it hits them in the wallet,” he said.

Silvia Acuna, another Mexico City shopkeeper, said customers are buying more bargain brands, even when it comes to soft drinks, which was almost unheard of in a country addicted to Coca-Cola.

But she said she doubts that people are poor as they’re pleading.

“Every time it’s a long weekend, everyone leaves town,” usually for Acapulco, she said.

U.S. retailers have increasingly moved into Mexico over the past two decades. Starbucks just opened its 400th store and found plenty of customers, even though one of its 20-ounce drinks costs almost as much as the daily minimum wage of $5 per day.

“These companies are betting, not just on the present, but more on the future,” said Eduardo Garcia, publisher of the online publication Sentido Comun.

Like Acuna, he suspects many people are doing better than they are letting on.

“Mexicans, they have the cross on their shoulders,” he said. “They never see anything good coming their way.”

Others take a more nuanced view of people’s opinions on the economy.

“It has to do with the context of the person that you ask.”

NEXT: Papal preacher says concern for unborn should extend to poor