Pope Francis: I’m no Marxist, but no offense taken 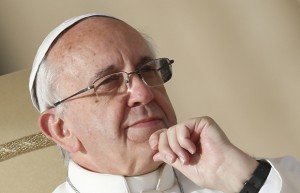 VATICAN CITY (CNS) — In another wide-ranging interview with an Italian journalist, Pope Francis denied he was a Marxist, dismissed the notion of women cardinals and reflected on Christmas as an occasion of joy, tenderness and hope.

The pope made his remarks in an interview with Andrea Tornielli of the Italian daily La Stampa and the website Vatican Insider. The interview was conducted Dec. 10 and published Dec. 14.

“Marxist ideology is wrong, but I have met many Marxists in my life who are good people, so I don’t feel offended” at being branded one, Pope Francis said.

Following the publication of the pope’s apostolic exhortation “Evangelii Gaudium,” (“The Joy of the Gospel”) Nov. 26, U.S. radio show host Rush Limbaugh denounced what he called “pure Marxism coming out of the mouth of the pope.”

“There is nothing in the exhortation that cannot be found in the social doctrine of the church,” the pope said. He acknowledged rejecting what he termed “trickle-down theories” of economic growth, but said such a position “does not mean being a Marxist.”

“I don’t know where this idea (of creating women cardinals) sprang from. Women in the church must be valued, not clericalized. Whoever thinks of women as cardinals suffers a bit from clericalism,” Pope Francis said.

Pope Francis repeated earlier calls for an end to world hunger, recounting a recent encounter during a public audience with a woman holding an infant.

“The child was crying its eyes out as I came past,” the pope said. “‘Please give it something to eat!’ I said. She was shy and didn’t want to breastfeed in public while the pope was passing. I wish to say the same to humanity: give people something to eat!”

Asked about the possibility of creating women cardinals, Pope Francis said: “I don’t know where this idea sprang from. Women in the church must be valued, not clericalized. Whoever thinks of women as cardinals suffers a bit from clericalism.”

The pope reaffirmed his commitment to ecumenism, noting that Christians around the world are already bound together by their common experience of martyrdom.

“Those who kill Christians don’t ask for your identity card to see which church you were baptized in,” he said. “We are united in blood, even though we have not yet managed to take necessary steps toward unity between us, and perhaps the time has not yet come.”

Pope Francis mentioned a German priest pursuing the sainthood causes of a Catholic priest and a Lutheran pastor, both killed by the Nazis for teaching the catechism to children.

“This is what ecumenism of blood is,” the pope said.

Recalling Pope Paul VI’s historic visit to Jerusalem in 1964, when he met Orthodox Ecumenical Patriarch Athenagoras of Constantinople, Pope Francis said the Vatican was preparing for him to mark that event’s 50th anniversary in 2014 with a papal visit to the Holy Land, including a meeting with the current Patriarch Bartholomew.

The pope noted the sufferings of Christians in the Holy Land: “On Christmas night, I think above all of the Christians who live there, of those who are in difficulty, of the many people who have had to leave that land because of various problems.”

Yet he emphasized that, despite the world’s misery, “Christmas is joy, religious joy, an inner joy of light and peace” and “speaks of tenderness and hope.”

“God never gives someone a gift they are not capable of receiving. If he gives us the gift of Christmas, it is because we all have the ability to understand and receive it,” the pope said. “Even a corrupt person has this ability. Poor him, it’s probably a bit rusty, but he has it.”