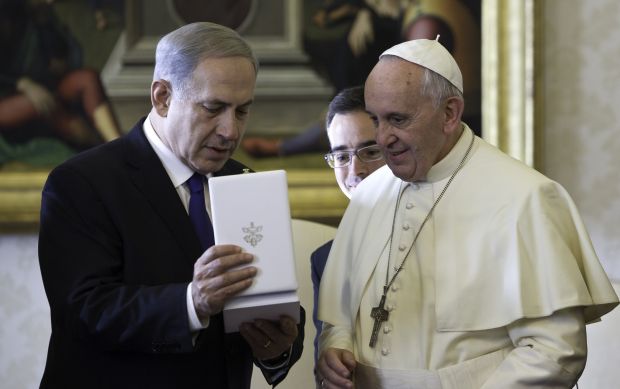 VATICAN CITY (CNS) — Pope Francis met with Prime Minister Benjamin Netanyahu of Israel Dec. 2, and discussed prospects for peace in the Middle East and the pope’s still-unscheduled trip to the Holy Land.

The two met privately for about 25 minutes in the pope’s library.

A statement from the Vatican press office said the leaders discussed the “complex political and social situation in the Middle East, with particular reference to the resumption of negotiations between the Israelis and the Palestinians, hoping that a just and lasting solution may be found as soon as possible.”

The pope’s plans for a trip to the Holy Land also came up, but the Vatican spokesman, Jesuit Father Federico Lombardi, told reporters no date had been set. Unofficial reports suggest the trip will be in May or June.

After their private meeting, the prime minister presented the pope with a book about the Spanish Inquisition’s persecution of the Jews.

The book, “The Origins of the Inquisition in Fifteenth Century Spain,” was written by the prime minister’s father, Benzion Netanyahu, a noted historian who died in 2012 at the age of 102. It argues that Spanish Christians of Jewish origin were persecuted not for any religious deviations but because of racism and envy of their economic success.

The prime minister had inscribed his present, a copy of the book’s Spanish edition, “To His Holiness Pope Franciscus, a great shepherd of our common heritage.”

Netanyahu also gave Pope Francis a silver menorah, the nine-branched candelabrum used in celebrating the Jewish festival of Hanukkah, sitting on a silver tray with a little silver oil pitcher.

The pope gave Netanyahu a bronze plaque bearing an image of St. Paul.

It was the two men’s first meeting, but Netanyahu had met with Blessed John Paul II in 1997 and with Pope Benedict XVI in 2009.

NEXT: Christians must work together to protect religious freedom, pope says