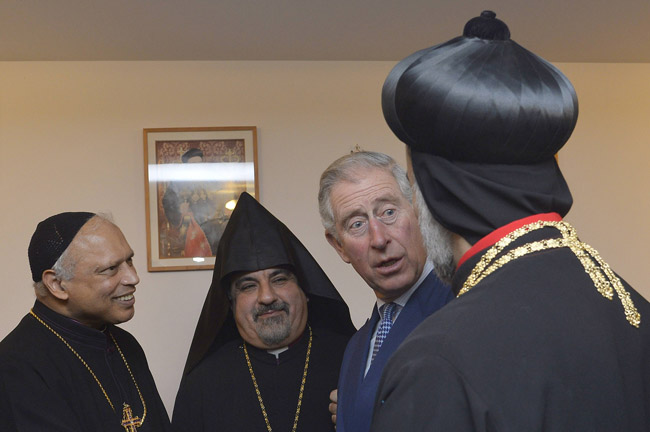 Britain's Prince Charles speaks to religious leaders during a visit to a Syrian Orthodox Church in London Dec. 17. The Prince of Wales was accompanied by Jordan's Prince Ghazi bin Muhammad bin Talal during the visit, celebrating Christian communities from the Middle-East in Britain. (CNS photo/Toby Melville, Reuters)

LONDON (CNS) — Prince Charles said he is “deeply troubled” by the plight of Christians in the Middle East.

In a Dec. 17 address at London’s Clarence House, the Prince of Wales said the Mideast’s Christians were being persecuted by “Islamist fundamentalist militants,” and he called upon the followers of Christianity, Judaism and Islam to unite to end the suffering.

“I have for some time now been deeply troubled by the growing difficulties faced by the Christian communities in various parts of the Middle East,” said Prince Charles, heir to the British throne.

“It seems to me that we cannot ignore the fact that Christians in the Middle East are increasingly being deliberately targeted by fundamentalist Islamist militants,” the prince said.

“It seems to me that we cannot ignore the fact that Christians in the Middle East are increasingly being deliberately targeted by fundamentalist Islamist militants,” the prince said.

“Christianity was literally born in the Middle East,” he said, “and we must not forget our Middle Eastern brothers and sisters in Christ.”

The prince said the festive season was an opportunity for Christians, Muslims and Jews to stress what bound them together and to redouble their combined efforts to “express outrage at all that tears us asunder.”

“Surely there is no better time to do so than at Christmas,” Prince Charles said, “to remind all of us that the emphasis of the love of neighbor” and the Golden Rule “are the ultimate foundations of truth, justice, compassion and human rights.”

“Such profound wisdom is at the heart of all three religions, however obscured the message has become,” he added.

The reception for Middle Eastern Christians was attended by Archbishop Vincent Nichols of Westminster, president of the Catholic Bishops’ Conference of England and Wales; by Archbishop Justin Welby of Canterbury, leader of the worldwide Anglican Communion; and by Chief Rabbi Ephraim Mirvis.

Prince Charles told his audience that, for 20 years, he has worked to “build bridges between Islam and Christianity to dispel ignorance and misunderstanding.”

But he said that “we have now reached a crisis where bridges are rapidly being deliberately destroyed by those with a vested interest in doing so.”

He said Christians accounted for just 4 percent of the population of the Middle East, and he predicted that the loss of the “irreplaceably precious” Christian presence in the region would be a “major blow” to world peace and reconciliation.

NEXT: Man seriously injured after setting self on fire in St. Peter’s Square