Seminary offers unconventional path to the priesthood for migrants 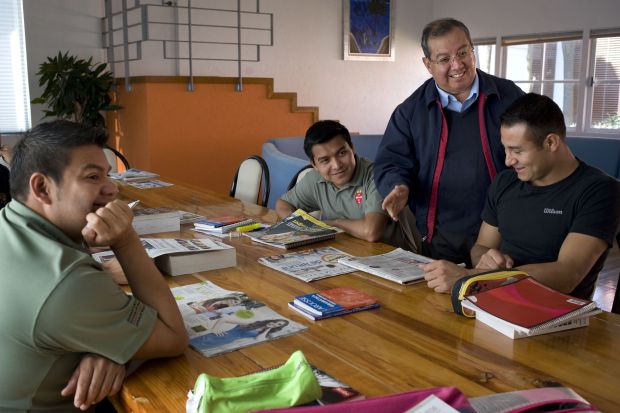 Father Rodrigo Benitez Flores, second from right, rector of the Hispanic Seminary of Our Lady of Guadalupe, chats with students during a dictation class at the seminary Nov. 21 in Mexico City. (CNS photo/David Maung)

MEXICO CITY (CNS) — Oscar Urrutia’s path to religious life has been anything but easy.

The seminary student previously dreamed of studying graphic design, but at 18 he jumped the border to enter the United States to make money for his family in Veracruz state. He ended up working construction jobs in the Carolinas and eventually joined a church community in the Diocese of Raleigh, N.C.

“I really needed my family, and inside the church I felt like I was in family,” Urrutia said.

He felt the call to the priesthood, but the path appeared impossible: U.S. seminaries are unable to accept students without the proper documentation. Then, the diocese discovered a solution — one that would bring him back to Mexico, but eventually legalize his living situation in the U.S.

Urrutia now studies at the Hispanic Seminary of Our Lady of Guadalupe in southern Mexico City. After his studies he can return to the Diocese of Raleigh, where he could work as a priest with Mexican migrants.

“North Carolina is a state with a growing Hispanic culture, so there’s a lack of priests,” he said.

The demand for potential priests like Urrutia in U.S. dioceses is enormous as parishes fill with Spanish-speaking populations who arrive in search of spiritual support. Such seminarians also represent renewal for Catholic communities across the country.

The seminary strives to produce priests who will serve those Latino communities, especially Mexicans, whose Catholic customs often differ from native-born Americans. U.S. dioceses sponsor the seminarians; most are men who migrated north as children with their parents.

“They know the culture of the people that they’re going to be serving in the United States,” he said of the seminarians.

The seminary is an unlikely undertaking, but one personally promoted by Cardinal Norberto Rivera Carrera of Mexico City, who has taken an interest in migrant issues, Father Benitez said. He added that it might be because the cardinal’s father once worked in the United States.

The Archdiocese of Mexico City and Mexican donors provided a majority of the funds for the seminary, which was founded in 1999 and started the following year with five students from the archdioceses of Los Angeles and Milwaukee.

Cardinal Rivera takes responsibility for the seminarians’ training, which lasts four years and includes courses in philosophy and English, Father Benitez explained. But the seminarians are expected to return to the U.S. under work visas.

The seminary has welcomed 178 students from 52 U.S. dioceses since opening. Thirty-one alumni now work as priests in the U.S. thanks to an arrangement negotiated by the seminary and the U.S. Embassy in Mexico City, which provides the visas and recognizes the young men’s education upon completion.

The education, Father Benitez said, is similar to any other seminary, but the students gain more exposure to Mexican customs and the local way of expressing the faith.

Those customs include more expressions of “popular religion” and traditions such as the celebration of the Day of the Dead, or All Souls Day. People often ask for priests to bless all sorts of items, ranging from new cars to fighting cocks. Confessions, Father Benitez said, often are requested at any time instead of the usual set schedule in U.S. parishes.

“The attention to individuals, including sacramentally, the attention is much more direct” in Mexico, he said.

Novenas also are popular, along with pilgrimages, especially to the Basilica of Our Lady of Guadalupe on her feast day, Dec. 12.

The seminary helps students become reacquainted with both culture and language — not always easy for students who sometimes do not speak either Spanish or English with proficiency.

“Our students … have a lot of energy. They’re going against the current. Because of the immigrant experience they have to exert even more effort to learn the language, learn the culture,” Father Benitez said. “They have to once again learn some cultural things when they come to this country.”

Those cultural things can come in handy for priests, many of whom would work with Mexican migrants in regions, where, “They don’t have much contact with U.S. society,” said Trinitarian Father Juan J. Molina, director of the U.S. bishops’ office on Latin America.

Juan Carlos Reynoso, 25, a seminarian from the Diocese of Fresno, Calif., sees a similar situation of finding too few priests with Spanish language skills and an understanding of Mexican sensibilities.

Reynoso moved to the U.S. in 2004 and went to work picking oranges and grapes with his family, only to feel a call to the priesthood after attending a retreat. At the time, though, he thought there was no path to pursue until being informed about the Hispanic seminary.

“After 10 years coming back to Mexico, it’s a different sensation,” he said. “It’s more than I expected.”

NEXT: Pope calls for prayers for kidnapped nuns, all people abducted in Syria