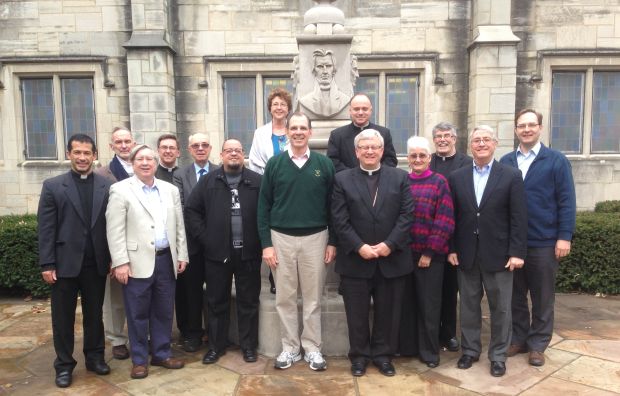 Participants in the International Commission for Dialogue between the Disciples of Christ and the Roman Catholic Church held Jan. 8-12 in Knoxville, Tenn., included Bishop David L. Ricken of Green Bay (center), Rev. Dr. Newell Williams, president of Brite Divinity School at Texas Christian University (left of Bishop Ricken) and Father Joseph Shenosky of the Philadelphia Archdiocese (behind the bishop).

Pope Francis said it best in his recent Apostolic Exhortation Evangelii Gaudium (“The Joy of the Gospel”). Ecumenical dialogue “is not just being better informed about others, but rather about reaping what the Spirit has sown in them.”

Father Joseph Shenosky thought about this quote as he participated in a session of the International Commission for Dialogue between the Disciples of Christ and the Roman Catholic Church held Jan. 8-12 in Knoxville, Tennessee.

The priest of the Archdiocese of Philadelphia is one of seven Catholic delegates to the ongoing ecumenical dialogue of the International Commission, which is co-chaired by Green Bay (Wisc.) Bishop David Ricken and Rev. Dr. Newell Williams, president of Brite Divinity School at Texas Christian University.

Father Shenosky presented a paper, “The Place of Eucharist in the Life of the Catholic Church.” Rev. Dr. Tom Best, retired director of the Faith and Order Division of the World Council of Churches, presented a paper “Citizens of Heaven: the Eucharist and the Christian Church (Disciples of Christ).”

The Catholic Church has been in ecumenical dialogue with the Disciples of Christ at an international level since 1977. Father Shenosky was recently appointed to the Commission by Cardinal Kurt Koch, the president of the Pontifical Council for Promoting Christian Unity.

It is now beginning its fifth phase, during which over five years the delegates will discuss “Christians Formed and Transformed by the Eucharist.”

“The roots of the Disciples of Christ are in the Reformed tradition,” Father Shenosky said. “Their 19th century founders (Barton W.) Stone and (Thomas) Campbell trace their spiritual roots to Presbyterianism. Their ecclesial community is unique in that they have always desired to seek the full visible unity of the Church of Christ, and they have always believed that the weekly celebration of the Lord’s Supper is essential for Christian life.”

From its discussion, “the commission identified several points of common affirmations in our understanding and approach to the Eucharist, as well as naming some major points of difference and divergence which still need further exploration,” the official release issued by the commission said. “The commission understands this dialogue as a contribution toward realizing the long-range goal of full unity in one faith, one Eucharistic fellowship, and common life in Christ.”

Bishop Ricken said in the release that it is “a beautiful and challenging formal conversation around the teachings and practices in hopes of moving toward greater understanding and sharing in the life of faith.”

Rev. Dr. Williams noted “An important component of each of our dialogues session is the time we spend together in daily worship and prayer. In those moments we are reminded that the unity we seek is finally a gift of the Holy Spirit.”

Father Shenosky’s expertise in ecumenical affairs traces back to his four years of study at the Pontifical Gregorian University in Rome where his doctoral dissertation for his doctorate in sacred theology, “The Development of Late Twentieth Century Ecumenical Theology in the U.S.A.,” was published in the university’s Tesi Gregoriana Series.

Currently he is director of pastoral and apostolic formation at St. Charles Borromeo Seminary. His responsibilities include coordinating the Field Education Program, teaching theology in both the College and Theology Divisions and serving as a formation adviser to seminarians.

“I think our first meeting in Nashville was very beneficial because the team members had an opportunity to understand and appreciate more fully what both Catholics and Disciples believe about the Eucharist,” Father Shenosky said. “Our formal and honest theological discussions, the time spent in prayer, and our informal interactions were done in an attitude of mutual respect and friendship. Ultimately ecumenism involves relying on help from the Holy Spirit.”

The next session of the International Commission will be held in Rome, June 14-20.

NEXT: Hundreds of boys receive awards at Scout Mass in Cathedral