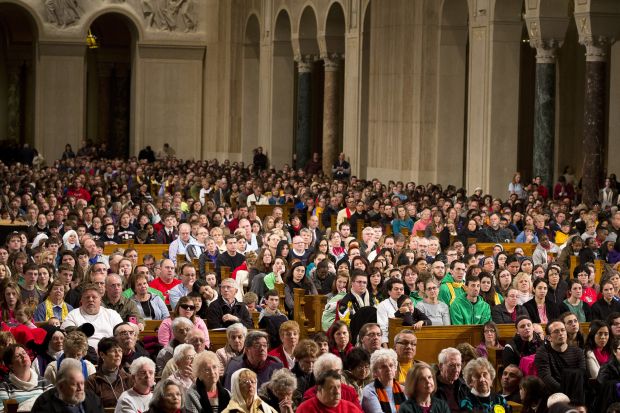 People pack the Basilica of the National Shrine of the Immaculate Conception during the opening Mass of the National Prayer Vigil for Life in Washington Jan. 21. (CNS photo/Tyler Orsburn)

The “vain and proud king” gullibly believed the swindlers who “told the king that those who could not see the (‘magic’) cloth were stupid and unfit for office,” said Cardinal O’Malley, chairman of the U.S. bishops’ Committee on Pro-Life Activities.

“The king was quite deceived and paraded through the street of his capital to receive the ovations of his people. The crowds lined the streets and applauded when the king passed by. The crowd shouted compliments and congratulated the king on his magnificent clothing. Suddenly a little child shouted, ‘But he has nothing on at all,'” Cardinal O’Malley said.

“‘The king’s new clothes’ today are called reproduction rights, termination of pregnancy, choice, and many other subterfuges that disguise the reality and the brutality that is abortion,” he added. “The voice of the church is like the child who declares before the world that the new clothes are a lie, a humbug, a deception. The church with the candor of a child must call out the uncomfortable truth. Abortion is wrong. Thou shall not kill.”

Cardinal O’Malley made his remarks in the homily of the Jan. 21 Mass opening the National Prayer Vigil for Life at the Basilica of the National Shrine of the Immaculate Conception. The cardinal said he has been to every vigil since they started 35 years ago.

“When the value of life is compromised or diminished, all life is at risk,” he said. “Human rights, without the right to life, are the king’s new clothes — it’s a fraud, an exercise in self-deception.”

Pope Francis, in his apostolic exhortation “Evangelii Gaudium” (“The Joy of the Gospel”), “laments the fact that we have done little to adequately accompany women in very difficult situations,” Cardinal O’Malley said. “The good news is that God never gives up on us. He never tires of loving us. He never tires of forgiving us, never tires of giving us another chance. The pro-life movement needs to be the merciful face of God to women facing a difficult pregnancy. Being judgmental or condemnatory is not part of the gospel of life.”

Pregnant women considering an abortion feel “overwhelmed, alone, afraid, confused,” he added. Referencing the Gospel reading of the Mass, the cardinal added, “We must never allow that woman to perceive the pro-life movement as a bunch of angry self-righteous Pharisees with stones in their hands, looking down on her and judging her. We want the woman to experience the merciful love of Christ.”

Shrine staff had the near-Sisyphean task of clearing snow from sidewalks and roadways, not to mention the dozens of icy steps leading to the upper church where the Mass was celebrated.

While organizers have come to expect 10,000 each year for the National Prayer Vigil for Life, the numbers may have been down somewhat. Buses weren’t parked along streets leading to the shrine as they customarily have. Looking from the shrine’s choir loft, the side aisles did not seem as utterly crammed with people as they typically do, and the occasional pew had room for one person — although it may have been taken up by coats or backpacks.

Bad weather in the Midwest and East — snow followed by diving temperatures — may have kept some away. It kept at least two prelates away — Archbishop Joseph E. Kurtz of Louisville, Ky., president of the U.S. Conference of Catholic Bishops, and Archbishop Charles J. Chaput of Philadelphia, where there was a record high snowfall of more than 13 inches for Jan. 21. Archbishop Chaput had been scheduled to be the main celebrant and homilist at the Jan. 22 Mass closing the vigil.

By mid-afternoon Jan. 21, the Diocese of Rockville Centre, N.Y., for example announced that numerous parishes throughout the diocese had to cancel bus trips to March for Life events. Seminarians from St. Joseph’s Seminary in Yonkers, N.Y., also called off their trip to the national shrine and the march.

Those who did make it to Washington had an easier time traffic-wise as the capital and its surrounding suburbs were virtually shut down for the day, with governments and schools closed in anticipation of snow, which ranged from 3 to 9 nine inches depending on the location.

About 700 were expected to stay overnight in the shrine basement where there was prayer through the night, with another 1,200 headed to the athletic facility at The Catholic University of America, next door to the shrine, to spend the night.

But being prepared for the arctic blast of the March for Life itself was a different matter. One young woman who said she was from Miami had but a modest jacket, thin cotton gloves and no hat. She said she hoped her group would stop by a drugstore before hunkering down in a Baltimore church to buy some hand-warming packets.

NEXT: Pro-lifers told to stay hopeful to overcome ‘shrine to personal choice’