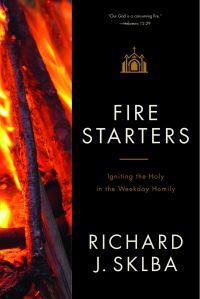 This is the cover of “Fire Starters” by retired Auxiliary Bishop Richard J. Sklba of Milwaukee. (CNS)

MILWAUKEE (CNS) — For Bishop Richard J. Sklba, “Fire Starters” is a compilation of the study, prayer, reflection and pastoral creativity that have been part of his more than 54 years of priesthood.

Thus, it is fitting that a volume devoted to the homily at daily Mass includes a declaration that the author preaches and practices.

“I’ve been praying about the readings, as a personal practice, for decades. As the years go by, I continue to see more and more in those readings — the more applications, the more people I deal with, the more pastoral implications I am exposed to, the more I see the Word continues to have an application,” said Milwaukee’s retired auxiliary bishop.

A year before his retirement Oct. 18, 2010, shortly after his 75th birthday, Bishop Sklba was looking for “a project that would bridge into retirement because I have said to individuals, to priests, for years, ‘You don’t retire from something; you retire to something.'”

He continued, “I wanted a project that might possibly take what I had experienced and prayed over and put it at the service of other people.”

Since moving to Old St. Mary’s Church, Milwaukee, seven and a half years ago, Bishop Sklba has celebrated the parish’s 7 a.m. Mass on Mondays and Wednesdays when he is in town.

“Consequently, about a year before I retired, I’d come up from the morning Mass and sit down and write into my computer a couple of ideas,” he said, and his daily practice “gradually took form and shape.”

While Bishop Sklba was officially retired, he wanted to remain of service as Milwaukee Archbishop Jerome E. Listecki continued his transition into the job as head of the archdiocese, and as the archdiocese filed for bankruptcy. Eventually, the bishop established a regimen that included three hours of writing each morning, and nearly another three every afternoon.

The result of his efforts is the 605-page “Fire Starters.” It was published by Liturgical Press five months later than scheduled because, in the course of compiling it, Bishop Sklba noted, he had “a whole series of ‘On second thought’ and ‘On third thought’ moments.”

One thought in that series had to do with the psalm response, which he said had “potential for spiritual depth.”

“I began to be conscious as I really prayed intensely over the readings, even when I didn’t have to preach, that the psalm response was not by accident,” the bishop said. “It was chosen with a great deal of care by the people who put the Lectionary together to reflect the sense of the readings.”

The bishop also inserted the short introduction the Lectionary includes before each reading, literary links for the Gospels because “that’s a helpful element that should be put at the service of people who are using the Lectionary,” and, when a new book starts, “a short paragraph that at least reminds people there is a bigger purpose to the book.”

The impact of “Fire Starters” on Bishop Sklba’s spiritual life, he said, was in the transition of praying for himself “to praying the Scriptures with an eye on the folks who showed up for Mass at Old St. Mary’s in the morning.”

“I’ve gradually become more conscious of the diversity of that group,” he told the Catholic Herald, a publication serving the Catholic community in southeastern Wisconsin.

“It made me increasingly conscious that the Word proclaimed in that weekday group of professional folks needed to be somehow targeted for their life, not just for my personal prayer, and it would have been targeted for them, if I was preparing to preach, as I have always insisted on,” the bishop said. “So gradually my spirituality became increasingly pastoral or priestly or congregationally oriented.”

In his apostolic exhortation, “Evangelii Gaudium” (“The Joy of the Gospel”), Pope Francis wrote, “Preparation for preaching is so important a task that a prolonged time of study, prayer, reflection and pastoral creativity should be devoted to it.”

“Preparation is key because one test of the applicability of the Word is how it has touched your own life,” he said. “We have to be careful that we don’t preach ourselves, and yet, to be willing, on occasion, to lift up an example from one’s own life as an illustration, not to call attention to ourselves, but that this is a possibility for your life.”