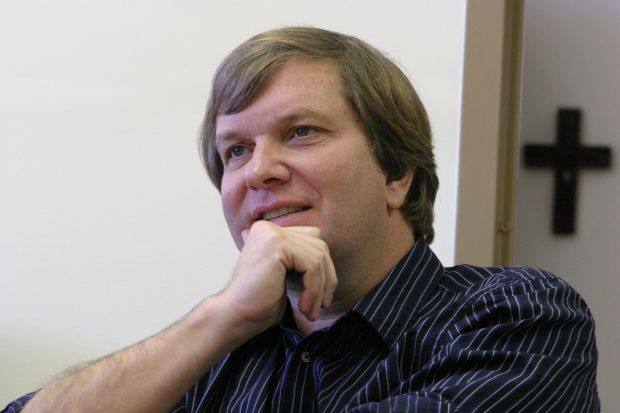 Jesuit Father John Dear, a nationally known peace activist honored in Iowa for his advocacy, has left his order after 32 years. He is pictured in a 2008 photo. While he is no longer a Jesuit, he is still a priest. (CNS photo/Michael Alexander, Georgia Bulletin)

TOWSON, Md. (CNS) — Jesuit Father John Dear, a nationally known peace activist who also is a popular author, retreat leader and lecturer on peace and justice issues, is no longer a member of the Society of Jesus after 32 years with the religious order.

Father Dear belonged to the Jesuits’ Maryland province, based in Towson.

Jesuit Father James Shea, provincial, said in a statement that the priest’s “dismissal from the Society of Jesus became effective” Dec. 20, and followed “an extended period of dialogue between the leadership of the Maryland province and John regarding his ministerial assignment and time he requested to discern his vocation.”

“The process was initiated in the fall of 2012 after John declined to return to his province to live in a Jesuit community while continuing his ministry of peace and social justice, including lecturing and writing,” the provincial said.

In a column published Jan. 7 in the National Catholic Reporter, Father Dear wrote: “This week, with a heavy heart, I am officially leaving the Jesuits after 32 years.”

“After three years of discernment,” he said, “I’m leaving because the Society of Jesus in the U.S. has changed so much since I entered in 1982 and because my Jesuit superiors have tried so hard over the decades to stop my work for peace — most recently, when my provincial ordered me to Baltimore but gave me no assignment and, I felt, encouraged me to leave, as many other superiors have done in the past.”

Father Shea’s statement did not address Father Dear’s claim that his superiors did not approve of his peace activism.

He is still a Catholic priest but according to canon law, he must have permission from a local bishop to publicly exercise his priestly faculties. In his column Father Dear said he doubts any U.S. bishop would give him permission “because most also object to my work against war and injustice, so I’m not sure if I will remain a priest.”

In a Jan 7 story, NCR reported that Father Dear gave the newspaper copies of letters from the Jesuits’ superior general in Rome, Father Adolfo Nicolas, and the Vatican Congregation for Institutes of Consecrated Life and Societies of Apostolic Life.

NCR said both documents stated that Father Dear disobeyed his superiors by refusing to live in a Jesuit community in Baltimore. The decree signed by Father Nicolas said the priest has been “obstinately disobedient to the lawful order of superiors in a grave matter.”

For three decades, Father Dear has participated in nonviolent campaigns, including civil disobedience, to end war and nuclear weapons proliferation. He has been arrested more than 75 times and spent “more than a year of his life” in jail, according to his biography.

Father Dear’s newest book is “The Nonviolent Life.” In 2008, he published an autobiography, “A Persistent Peace.” He has been a longtime columnist for NCR, an independent, lay-owned biweekly newspaper based in Kansas City, Mo.

In an interview in early 2000 with The Catholic Sun, newspaper of the Diocese of Syracuse, N.Y., Father Dear said his quest for nonviolence began in the early 1980s as he visited Israel and was shocked to see war “literally happening before my eyes over the Sea of Galilee where Jesus lived and taught.”

In 1993, Father Dear was arrested at Seymour Johnson Air Force Base in Goldsboro, N.C., for hammering on an F-15 nuclear fighter bomber. He spent eight months in North Carolina county jails.

In 2010, he received the Pacem in Terris Peace and Freedom Award in Davenport, Iowa.

In 2011, he and 13 others were found guilty of criminal trespass at Creech Air Force Base in Nevada. The group was charged in 2009 after walking through an open gate at the base seeking to talk with soldiers piloting unmanned drones over Afghanistan and Pakistan from the military installation. Father Dear and the other protesters spent a night or two in jail after their arrest. When they were found guilty, the judge sentenced them all to time served.

In his NCR column, Father Dear said he has joined the staff of Pace e Bene, a small group based in Long Beach, Calif., that “works to promote Gospel nonviolence.” The priest also is helping to organize Campaign Nonviolence “to protest war, poverty and environmental destruction” by holding demonstrations across the U.S. before elections this fall.

“I think the nonviolent Jesus wants us — all of us — to work as best we can in these critical times for the abolition of war, poverty, nuclear weapons and catastrophic climate change so God’s reign of peace will spread,” he said.