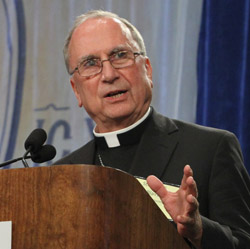 STOCKTON, Calif. (CNS) — The decision to file for Chapter 11 bankruptcy protection was difficult for the Diocese of Stockton but will allow it to “compensate as fairly as possible” victims of abuse, “including those who have not yet come forward or had their day in court,” said Bishop Stephen E. Blaire.

Bankruptcy protection, filed Jan. 15, also will “provide a way for us to continue the ministry and support we provide to the parishes, the poor and the communities located within our diocese,” he said in a Jan. 13 statement.

“After months of careful consideration and prayer,” Bishop Blaire said, it became clear to him it was the right course of action. “This decision was reached through consultation with experts in finance and law, as well as with priests, parishioners and many others in the community our diocese serves,” he added.

In the past 20 years, the Stockton Diocese has paid more than $14 million in legal settlements for victims of clergy sexual abuse and the total amount of payments, including funds from insurers and others, amounts to $32 million.

Stockton becomes the 10th U.S. archdiocese or diocese that has filed bankruptcy protection as a result of the costs of clergy sexual abuse lawsuits since 2004. The others are: the Milwaukee and Portland archdioceses; and the dioceses of San Diego; Spokane, Wash.; Davenport, Iowa; Tucson, Ariz.; Fairbanks, Alaska; Wilmington, Del.; and Gallup, N.M.

Those that have since emerged from bankruptcy include Tucson, Davenport, Spokane, Wilmington and Portland.

“The parishes and Catholic schools within our diocese are separate corporations and should not be impacted by this filing,” Bishop Blaire said.

“It is important to remember that the only entity seeking bankruptcy protection is the corporation sole known legally as the Roman Catholic Bishop of Stockton,” Bishop Blaire said in his statement.

He also noted that since he began discussing the possibility of bankruptcy with diocesan officials more than six months ago, he has been “moved by the understanding, patience and support expressed by so many people in the church and in the wider community.”

The bishop wrote to Catholics in the diocese last summer informing them that funds used to settle sexual abuse lawsuits were almost depleted and the diocese had “no apparent way to meet the expenses of pending lawsuits and possible future claims.”

In that letter, he said that since his arrival in the diocese 14 years ago, he has tried to settle abuses cases when possible and to “heal the deep wounds caused to our church and our diocese by the evil of sexual abuse.”

“Today, the cash reserves from which these payments are made are all but gone” he wrote, and the remaining cash “is a small fraction of what is needed to face pending lawsuits as well as any new claims.”

He said decisions made by the diocese “will not impact the solvency or operations of the parishes,” and he stressed that the “hard work you have done to build and run your parish should not be jeopardized by the actions or inactions of the diocese in decades past.”