50 years after declaring ‘War on Poverty,’ a renewed campaign 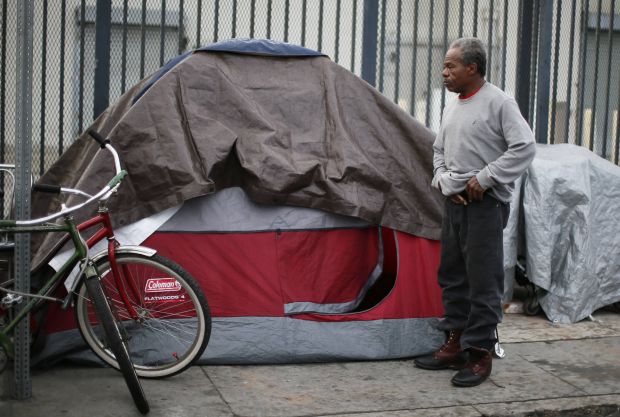 A man stands outside his tent in 2013 on Skid Row in downtown Los Angeles. (CNS photo/Lucy Nicholson, Reuters)

WASHINGTON (CNS) — When President Lyndon Johnson declared a “war on poverty” in his 1964 State of the Union address, few then expected just what it would take to wipe out domestic poverty.

Fifty years later, acknowledging the task in front of them, Catholic and political leaders alike have stated their intent to lessen poverty in the United States.

On Jan. 8, the 50th anniversary date of Johnson’s address, Catholic Charities USA brought together a host of other organizations, including Feeding America, Save the Children, the Salvation Army, the National Alliance to End Homelessness, Lutheran Services in America, United Way and the Alliance for Children and Families, to work together in 2014 to educate, innovate and act to reduce poverty in communities across the country.

Catholic Charities outlined the principles for the groups to follow in the effort: educate the public about the everyday challenges facing the more than 46 million people living in poverty in America today; highlight innovate solutions to poverty by connecting local practitioners with national leaders; and act to reduce poverty in communities across the country using newfound knowledge and techniques.

The participating organizations also will host a poverty round-table in February.

“The partnership announced today will explore tangible opportunities to work together throughout 2014 to support each other’s poverty-reduction initiatives,” said a Jan. 8 statement from Father Larry Snyder, Catholic Charities’ president.

“We signed on. We’re for it. It’s great,” the Rev. David Beckmann, president of Bread for the World, the Christian citizens anti-hunger lobby, told Catholic News Service Jan. 9.

Rev. Beckmann said the U.S. poverty rate was cut in half between 1964 and 1973. “The country was concerned about poverty. And the economy was strong,” he said, but “we haven’t had a president since Lyndon Johnson who considered poverty one of his top five priorities.”

He added progress at cutting poverty was “very modest” between 1974 and 2008, “and then with the financial crisis in 2008, there was a big increase in hunger and poverty.” “It would have been bigger,” he said, without the programs put in place between 1964 and ’73. “In the last five years, the social programs had been the lifeline for families.”

One problem Rev. Beckmann sees in cutting poverty further is that “wages haven’t kept up with inflation for working people. … We haven’t continued serious progress against poverty because we as a nation haven’t tried. We’ve been preoccupied with other issues. That’s why I’m just thrilled the anniversary of the war on poverty just in the last few days prompts a debate on the war on poverty, and it’s a serious debate.”

Rev. Beckmann is glad he’s got a new ally. “I’m Lutheran, but I think Pope Francis is saying all the right things,” he said. In fact, he recently gave copies of the pope’s exhortation, “Evangelii Gaudium” (“The Joy of the Gospel”), to a dozen Bread for the World donors.

“In it, he says it’s right that markets are important, but if free markets result in homeless people dying on the street, we’ve got to intervene somehow. He’s right!” Rev. Beckmann said. “The bottom line is we’ve got to get systems in place to keep people from dying in the cold.”

Archbishop Thomas G. Wenski of Miami also focused on “The Joy of the Gospel” in a Jan. 6 op-ed essay he wrote for the South Florida Sun-Sentinel daily newspaper.

The “throwaway culture” Pope Francis condemns in the exhortation “should provoke reflection — and lead to action — especially in the face of the challenges faced by low-wage workers in our economy today,” Archbishop Wenski said. “This year, the minimum wage in Florida will rise to a paltry $7.93 an hour. This is hardly enough for a worker to support oneself, much less a family.”

Archbishop Wenski added, “Low wages that do not allow workers to earn enough to pay rent at the end of the month and to put enough food on the table for their kids leads to what the pope has also called ‘an economy of exclusion,’ stunting the lives of the poor for lack of opportunity.”

With half of all new jobs projected to be in low-wage occupations, “the growing gap in wages between the most affluent of our citizens and middle- and lower-income workers needs to be addressed,” the archbishop said. “As Pope Francis has repeatedly said, we cannot tolerate a ‘globalization of indifference.’ We cannot rob the working poor of hope.”

On Jan. 8, Archbishop Wenski, who is chairman of the U.S. bishops’ Committee on Domestic Justice and Human Development, made the same points in a joint letter he issued with Father Snyder calling on the U.S. Senate to advance policies that promote decent wages and just wages.

They urged lawmakers to raise the federal minimum wage, which at its current level does not “provide sufficient resources for individuals to form and support families.”

A full-time job at the minimum wage salary of $7.25 an hour provides about $15,000 yearly. Democrats in Congress have proposed raising the minimum wage to $10.10 per hour. The minimum wage for tipped workers hasn’t been raised in more than 20 years and remains at $2.13 an hour.

President Barack Obama said he planned on making income inequality a priority for the rest of his presidency.

Contrarian voices, though, have said that prior government approaches to eradicating poverty did not solve the problem.

Sen. Marco Rubio, R-Fla., in a Jan. 8 speech, said the United States needs a new agenda to help the poorest Americans find work and help their families climb out of poverty.

Federal money to cut poverty should be shifted to the states instead, and Congress should reform the tax code to give people in low-wage jobs an incentive to stay in the workforce and not collect unemployment insurance, Rubio said, adding that raising the minimum wage to $10 an hour may be popular with many Americans but that it won’t help people emerge from poverty.

NEXT: Institute’s goal to help Catholics ‘reclaim sense of sacred’ in liturgy