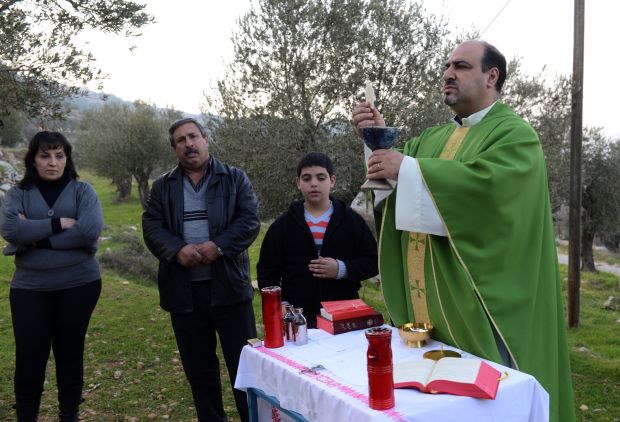 Father Ibrahim Shomali celebrates an outdoor Mass in an olive grove outside the Salesian Monastery in Beit Jalla, West Bank, Jan. 18. A planned routing of the Israeli separation barrier could isolate the monastery from the people it serves. (CNS photo/Debbie Hill)

JERUSALEM (CNS) — On the eve of an Israeli Supreme Court decision concerning the construction of a contested segment of the security barrier in the West Bank town of Beit Jalla, U.S. and Canadian bishops sent letters to their governmental representatives urging them to push Israel to stop building along the proposed route.

Meanwhile, in Jerusalem, the Israeli Supreme Court spent three hours Jan. 29 listening to security expert testimony from the Israeli Council for Peace and Security presented by retired Israeli Col. Shaul Arieli on an alternative route for the barrier that would still be beyond the Israeli border but would not reach into the Cremisan Valley.

If built according to the Israeli plan, the proposed extension of the security barrier would cut through Palestinian-owned land, separating families from their agricultural land as well as separating the Salesian Sisters’ school from the community it serves. The schoolchildren would be forced to go through a military-like checkpoint gate to reach their school if the barrier is built. It would also separate the women religious from the Salesian monastery for male religious and would separate both communities from their lands.

Arieli testified that the alternative route would cause less harm and would better serve Israeli security needs because it would not require the construction of gates, which are always weak points and cause friction.

Israel has argued that the location of the barrier is vital for the protection of the Har Gilo settlement, which abuts Beit Jalla but is considered a neighborhood of Jerusalem by Israel. Israeli authorities noted that most of the wall in the area has already been built.

A final court decision is expected in late January or early February.

Diplomats and representatives from 12 countries as well as several church leaders attended the court heating. Among them were Auxiliary Bishop William Shomali of Jerusalem and Father Ibrahim Shomali, parish priest in Beit Jalla.

In his Jan. 28 letter, Bishop Richard E. Pates of Des Moines, Iowa, chairman of the U.S. bishops’ Committee on International Justice and Peace, asked U.S. Secretary of State John Kerry “to urge the government of Israel to cease and desist in its efforts to unnecessarily confiscate Palestinian lands in the Occupied West Bank.”

“The Cremisan Valley is a microcosm of a protracted pattern that has serious implications for the ongoing Israeli-Palestinian conflict and your commendable efforts to achieve a peace agreement,” Bishop Pates said.

In a similar letter sent to Canadian Foreign Minister John Baird, Archbishop Paul-Andre Durocher of Gatineau, Quebec, president of the Canadian Conference of Catholic Bishops, noted that the barrier would also disturb the religious life of the community in that area by preventing the traditional May procession to Beit Jalla and prevent the centuries old Christmas procession, which begins at the Monastery of Mar Elias.

“We ask your government to raise our objections about the extension of the security wall in the Cremisan Valley, with the hope that a change to the present Israeli plan could become one step forward toward making it possible for Palestinians and Israelis to live in peace and justice,” he said.

He added that the Canadian bishops were aware of and supported Israel’s need for and right to security.

“Nevertheless, we believe the wall as planned will only deepen the wounds between Palestinians and Israelis. We are convinced, with our brother bishops from around the world, that the extension of the wall will raise more skepticism from the international community. As it is, the security wall is already perceived by many as an illegal ‘land grab.'”

Both bishops were signatories to a Jan. 28 statement released by the bishops of the Holy Land Coordination. That statement, which included bishop-signers from Europe and South Africa, called for prayer and international pressure on Israel to change the planned route.

“We call for justice to be upheld in the Cremisan Valley, near Bethlehem. Israel’s plans to build a security wall on the land of 58 Christian families should be abandoned,” the statement said. “We recognize the right of the State of Israel to security and secure borders. However, the planned route of the security wall deviates sharply from the Green Line, the internationally recognized demarcation line separating Israel and the territories captured in the six-day war of 1967.”

The bishops said they were concerned that the planned security wall “is more about consolidating the settlement areas and permanently choking off Bethlehem from Jerusalem.”

“This particular plan is a microcosm of the tragic situation in the Holy Land, which incites resentment and mistrust, making the possibility of a much-needed solution less likely,” they said.

NEXT: The Salesian and the Shogun: Documents discovered in Vatican Library