At start of peace talks, pope calls for urgent end to violence in Syria 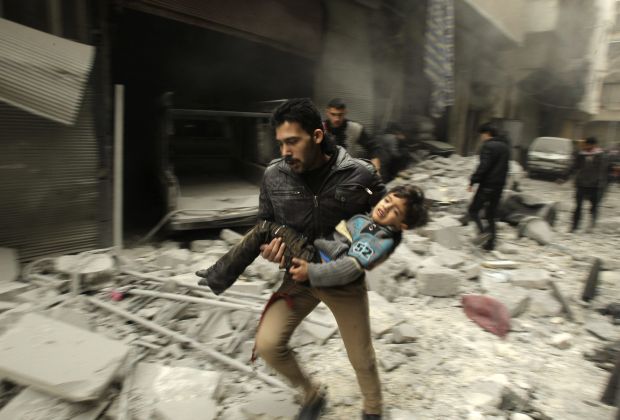 A man runs while carrying a child who survived what activists say was an airstrike by forces loyal to Syrian President Bashar Assad in Aleppo Jan. 21. (CNS photo/Ammar Abdullah, Reuters)

VATICAN CITY (CNS) — As world leaders gathered in the hopes of finding a peaceful solution to Syria’s three-year-long brutal conflict, Pope Francis asked that they spare no effort in bringing an end to the violence.

The pope also urged the people of Syria to rebuild their nation and see in the other “not an enemy, a rival, but a brother or sister to welcome and embrace.”

The pope made the appeal at the end of his general audience in St. Peter’s Square Jan. 22, the day a major peace summit, dubbed “Geneva II” began in Switzerland.

The U.N.-sponsored talks — scheduled to run at least until Jan. 24 — were to bring world leaders together to help forge a solution to the crisis and bring representatives of the Syrian government and major opposition figures together for direct talks for the first time.

A two-person Vatican delegation, led by Archbishop Silvano Tomasi, the Vatican observer to U.N. agencies in Geneva, was also invited to attend the peace summit.

In his appeal to summit participants, Pope Francis said he was praying that “the Lord touch the hearts of everyone so that, by exclusively seeking the greater good of the Syria people, who have been greatly tried, they spare no effort in urgently bringing an end to the violence and conflict, which already has caused too much suffering.”

The pope said he also was praying that the people of Syria would begin a journey of reconciliation and peace “with determination.” He asked that the country be rebuilt “with the participation of all citizens,” so that everyone would see each other as family and not as rivals.

Archbishop Tomasi said finding a solution is a challenge because “the situation is extremely complex.”

There are a huge number of regional and global interests at play, not to mention the presence of many factions within Syria and “outside forces adding to the opposition” against the Syria government, he said.

All of the different forces at work “create a system of destabilization that is difficult to fix,” he told Vatican Radio Jan. 22.

Talks will need to focus on finding some common ground and shared interests among all the different local, regional and international players involved, he said. “And it’s not easy.”

Something must be done, however, he said. More than 130,000 people have died, millions of people have fled the country, and another 3 million Syrians have been internally displaced by the fighting, he said.

People in refugee camps are dying because of insufficient health care, and the winter months bring added hardship to those in Syria who have lost their homes, the archbishop said.

In addition to an immediate cease-fire, “concrete international solidarity is needed, that is, lots of money, in order to put the local economy back on its feet” and rebuild neighborhoods and homes so people can return to a normal life, he said.