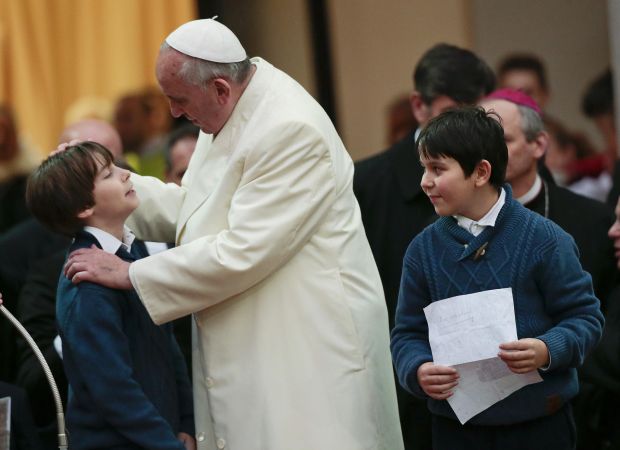 Pope Francis embraces a boy during a visit to the Basilica of the Sacred Heart of Jesus in Rome Jan. 19. (CNS photo/Tony Gentile, Reuters)

OXFORD, England (CNS) — The cardinal who heads Pope Francis’ Council of Cardinals said the Catholic Church is entering a “new era” and accused critics of the pope’s statements on economic injustice of failing to “understand reality.”

“I’m firmly convinced we are at the dawn of a new era in the church, just as when Pope John XXIII opened its windows 50 years and made it let in fresh air,” said Honduran Cardinal Oscar Rodriguez Maradiaga of Tegucigalpa in an interview with Germany’s Cologne-based Kolner Stadt-Anzeiger published Jan. 20.

“Francis wants to lead the church in the same direction that he himself is moved by the Holy Spirit. This means closer to the people, not enthroned above them, but alive in them,” said the cardinal, who leads the council appointed by Pope Francis to work on reform in the Roman Curia and advise him on church governance.

In addition, Cardinal Rodriguez Maradiaga said, the pope favored “above all, a simpler life and leadership” from priests and bishops in line with the “sometimes forgotten message of Jesus,” and believed they should go out to people, rather than “sitting in our administrative offices and waiting for people to come.”

He said most Catholics were “behind the pope” and added that he believed Cardinal-designate Gerhard L. Muller, prefect of the Vatican’s Congregation for the Doctrine of the Faith, could be less absolute in his defense of authority in the church.

“I understand it. He’s German and a German professor of theology on top of it. In his mentality, there is only right or wrong, that’s it,” said Cardinal Rodriguez Maradiaga.

“But I say: The world, my brother, isn’t like that. You should be slightly flexible when you hear other voices, instead of just listening and saying, no, here this is the wall. I believe he’ll get there, and understand other views. But for now he’s still only at the beginning.”

The cardinal’s remarks follow recent criticisms of Cardinal-designate Muller, formerly bishop of Regensburg, Germany, for what some bishops and cardinals see as an overly rigid stance on church teaching in some areas.

The archbishop was appointed by Pope Benedict XVI to head the doctrinal congregation in July 2012 and named a cardinal by Pope Francis Jan. 12.

Speaking Jan. 21 at a Catholic university symposium in Venice, Cardinal-designate Muller said he believed church life should not be “so much concentrated on the pope and his Curia.” He said the pope’s November apostolic exhortation, “Evangelii Gaudium” (“The Joy of the Gospel”), did not, “contrary to superficial interpretations, contain any instructions for a change of direction or revolution.”

However, in the interview, Cardinal Rodriguez Maradiaga said the pope’s priority was that the church should “reach the common people,” and show compassion through “a different kind of care for the world, especially the needy.”

He added that there had been “a lot of shouting” against the pope’s “critique of capitalism” in “Evangelii Gaudium,” especially in “U.S. business circles” who did not “understand reality.”

“Who says capitalism is perfect, especially since the recent financial market crisis?” the cardinal said.

“This crisis didn’t hit the poor, but rich America and rich Europe, and it wasn’t the invention of liberation theology or the result of the ‘option for the poor.’ When no one criticizes capitalism, this is something false,” he said.

Asked about calls for the church to change its attitude to divorced and remarried Catholics, Cardinal Rodriguez Maradiaga said the church was “bound by God’s commandment” that “what God has joined together, man must not divide.”

However, he explained that there were “many ways to interpret” the commandment, and “still much room for a deeper interpretation” without reversing the teaching.

The cardinal said an October Synod of Bishops on the family would tackle new social issues such as surrogate parenthood, childless marriages and same-sex partnerships which were “not even visible on the horizon” at the last family synod in 1980.

“But pastoral challenges require timely answers. They can’t any longer come from authoritarianism and moralism.”

He said the cardinals who elected Pope Francis in March knew that “much had to change in the church.”

He added that changes now “high on the agenda” included plans to make the Synod of Bishops a “useful and powerful tool of collegial leadership,” rather than a body “meeting in Rome every three years,” and the creation of a new Congregation for the Laity to reflect the fact that laity “constitute the vast majority of God’s people.”

A new constitution for the Curia also was planned, the cardinal said. It would replace Pope John Paul II’s 1988 apostolic constitution, “Pastor Bonus,” on the structure and responsibilities of the Curia. The cardinal promised it would be “something completely new, not just a modification or adaptation.”

“There are plenty of staff in the Curia who agree it cannot stay as it is and are supporting us with their own proposals. The Curia is by no means a monolithic bloc,” he said.

NEXT: Despite prayers, Syrians hold little hope for peace in Geneva II talks