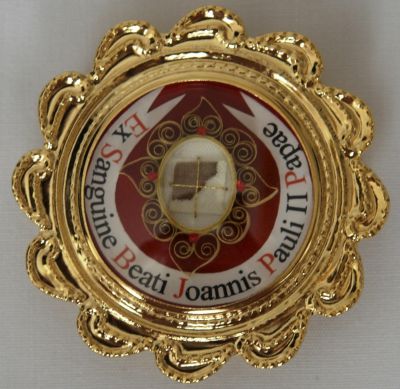 VATICAN CITY (CNS) — Less than a week after a relic of Blessed John Paul II disappeared from a country chapel east of Rome, Italian police recovered the venerated piece of fabric stained with the late pope’s blood.

Auxiliary Bishop Giovanni D’Ercole of L’Aquila told reporters Jan. 31 that one of three men arrested for the theft the previous day had led police to the relic, which they found inside his garage.

The bishop said the postage-stamp-sized piece of fabric — cut from the clothing Blessed John Paul was wearing when he was shot May 13, 1981 — was almost intact, missing only a few gold threads.

The previous day, the thieves turned over an empty iron reliquary, along with a stolen cross, buried on the grounds of a drug treatment facility in the city of L’Aquila, about 75 miles east of Rome. They said they had removed and discarded the relic itself because they considered it worthless.

“These three lads have the forgiveness of Pope John Paul II and our own,” Bishop D’Ercole told reporters.

The relic and the cross were reported missing from the church of San Pietro della Ienca over the weekend of Jan. 25-26. The church, where Blessed John Paul often prayed, is located 13 miles north of L’Aquila, in the mountainous Abruzzo region where he frequently went on brief vacations.

Polish Cardinal Stanislaw Dziwisz of Krakow, who served as Blessed John Paul’s personal secretary during his pontificate, gave the relic to the chapel in recognition of the late pope’s many visits.

NEXT: Pope calls for the promotion of life at every stage