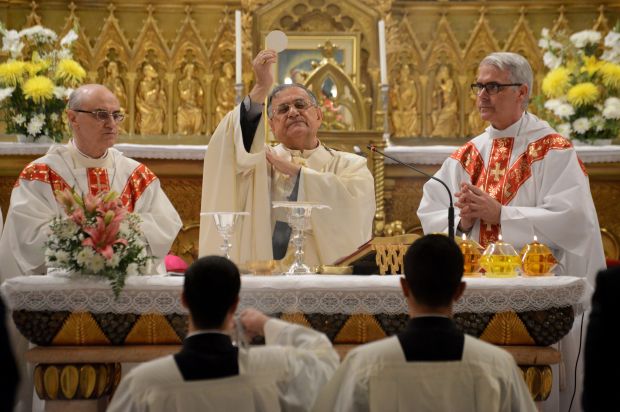 Latin Patriarch Fouad Twal of Jerusalem raises the host during a Mass of Thanksgiving for 50 years of Catholic Relief Services' presence in the Holy Land at the patriarchate in Jerusalem Jan. 15. At left is Archbishop Giuseppe Lazzarotto, papal nuncio to Israel and Cyprus and apostolic delegate in Jerusalem and the Palestinian territories, and Archbishop Paul S. Coakley of Oklahoma City, chairman of Catholic Relief Services, right. (CNS photo/Debbie Hill)

JERUSALEM (CNS) — Catholic Relief Services’ work in the Holy Land has been an authentic expression of the Christian faith, encouraging a love of God and a move to action, said Latin Patriarch Fouad Twal of Jerusalem.

“Your work and commitment invite us to reflect more deeply on the experience of God’s love and open our hearts to solidarity with our neighbors and moves us to action,” he said at a Jan. 15 Mass of Thanksgiving celebrating 50 years of CRS’ presence in the Holy Land.

Patriarch Twal said he gave thanks to “the all-wondrous God” who allows for the faith with which CRS does its work, noting that CRS is known for its effective and innovative program all over the world.

“For 50 years CRS has felt compelled to put into practice the mandate of the church,” he said. “Your 50th anniversary gives us the opportunity to express our gratitude to your organization and those who support it by prayer and by donation. We are grateful for your very generous and untiring commitment to assist the most vulnerable and poor and to uphold the dignity of sacred human life.”

CRS, the U.S. bishops’ international relief and development agency, was created in the wake of World War II to help displaced people. In 1961 the Jerusalem office was established with the help of the Hashemite Kingdom of Jordan, which then had sovereignty over East Jerusalem.

Over its years of service CRS has moved from emergency response and direct feeding to building partnership capacity, said Oklahoma City Archbishop Paul S. Coakley, recently elected CRS chairman. Its work is ever-evolving, dependent on the needs and changes in the communities that the agency serves, he said, noting that CRS continues to provide emergency response when the need arises.

“We really want to make a difference but we don’t want to create dependency,” Archbishop Coakley told Catholic News Service at a reception following the Mass. “We want to leave an enduring legacy behind us, but we are ultimately helping the people where we serve in the West Bank and Gaza so they can have a sense of their own dignity and a sense of their own capacity to become more self-reliant. It is all about partnership.”

Bishop Richard E. Pates of Des Moines, Iowa, chairman of the U.S. bishops’ Committee on International Justice and Peace, noted the role CRS has played in creating connections and dialogue between Christian and Muslim Palestinians. He said the agency also was creating dialogue between Palestinians and Israeli Jews.

“It shows that CRS is really there to serve the needs of the people — their physical needs but also in addition their spiritual needs,” said Bishop Pates, who attended the Mass and reception with bishops from Canada, Europe and South Africa who were in the Holy Land on a solidarity visit.

NEXT: Rabbi says his friend, the pope, will face challenges in Holy Land