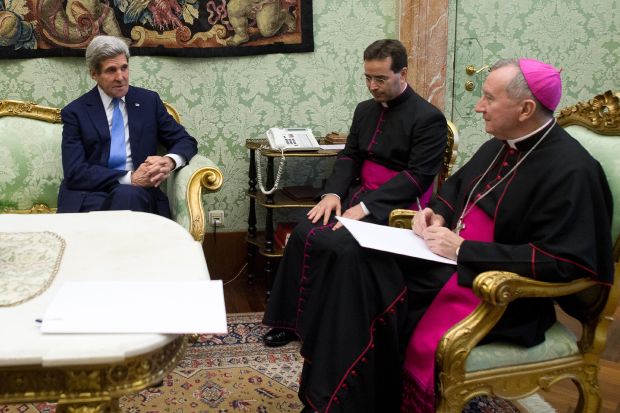 “The meeting was very broad; it lasted about one hour and 40 minutes,” said Jesuit Father Federico Lombardi, Vatican spokesman.

Father Lombardi said the two secretaries of state did not meet alone Jan. 14, but had top aides with them for the discussions. Archbishop Dominique Mamberti, the Vatican’s foreign minister, participated, as did Victoria Nuland, Kerry’s assistant secretary of state for European and Eurasian affairs; Shaun Casey, special adviser to Kerry for faith-based and community initiatives; and Ken Hackett, U.S. ambassador to the Holy See.

“Various themes were discussed and naturally those regarded the Middle East first of all — the situation in Syria and preparations for the (upcoming peace) conference in Geneva,” Father Lombardi said, referring to the U.N.-sponsored peace talks scheduled for Jan. 22.

Father Lombardi said the Vatican’s position on the Syrian conflict, which has been ongoing since March 2011, was explained by the pope in his Jan. 13 speech to diplomats serving at the Vatican. The Vatican’s top concerns, he said, are to restore peace, address the serious humanitarian situation and help the suffering Syrian population.

The two secretaries of state “also discussed the United States, especially the themes that have been the object of concern and discussion by the U.S. bishops: the health care reform and its relationship to guarantees of religious freedom,” Father Lombardi said.

In general, employers who provide health insurance to workers were required as of Jan. 1 to comply with a government mandate that those policies include various types of contraceptives, including sterilization and abortifacients. The penalty for noncompliance is potentially thousands of dollars daily in fines. Although the Obama administration has made some allowances for exemptions for religious institutions, when final rules were issued in June, some Catholic employers said the exception still did not address their moral objections.

While legal challenges to the mandate are making their way through the U.S. courts, Archbishop Joseph E. Kurtz of Louisville, Ky., president of the bishops’ conference, asked Obama Dec. 31 to exempt from fines religious institutions who believe funding contraception and sterilization violate their religious principles.

In remarks later to members of the press traveling with him, Kerry said, “it was a privilege for me as the first Catholic secretary of state in about 32 or 33 years … to talk with the new secretary of state there about the broad array of issues that we face together across the world. And on a personal level, it was a thrill for me to be able to do that; as an altar boy as a young kid, I would never have imagined that I would have been crossing the threshold of the Vatican to meet, as secretary of state, with the secretary of state of the Holy See.”

Cardinal-designate Parolin and Kerry “also discussed negotiations between Israel and Palestine, in which the American secretary of state has been deeply involved, as you know,” Father Lombardi said.

Kerry told reporters, “Archbishop Parolin asked me for a solid briefing with respect to the Middle East peace process. Pope Francis will be going to Israel and the Palestinian territories and to Jordan in May, and so we agreed, after I gave a briefing, that we would stay in touch in order to keep him abreast of what we’re doing and then what progress there may be in the peace process.”

Father Lombardi said the two also spoke about Africa, “particularly about the situation in South Sudan, which has been deteriorating recently, and the hopes that the mediation underway will succeed.”

The United Nations reported Jan. 13 that some 355,000 South Sudanese had been displaced during a month of fighting between forces loyal to the president and those following a former deputy vice president. The U.N. Mission in South Sudan estimated that that up to 10,000 people may have been killed since the conflict started Dec. 15.

Kerry said: “There is a large Catholic population in South Sudan. President (Salva) Kiir, himself, is Catholic, and I think that our efforts over the last days could be augmented by the efforts of the Holy See with respect to trying to end the violence and bring about a peaceful resolution.”

Kerry also said he and his Vatican hosts discussed Cuba and the need to promote respect for religious freedom and human rights on the island.

“I raised the issue of Alan Gross and his captivity, and we hope very much that there might be able to be assistance with respect to that issue,” Kerry said, referring to the American man convicted in 2011 of crimes against the Cuban state and sentenced to 15 years in prison. He had been working as a contractor for the U.S. Agency for International Development, serving on a democracy-building project financed by the agency.

“This was as comprehensive a conversation as I’ve had with any secretary of state or foreign minister in the course of my tenure, and I think, happily, we agreed on an enormous amount of things that we can cooperate on,” Kerry told reporters.

He also said: “I know that the Holy Father is anticipating the visit of President Obama here, and the president is looking forward to coming here to meet with him. So much was agreed on as a mutual agenda this morning.”

Father Lombardi said Cardinal-designate Parolin also was pleased with the discussions, the climate of the meeting and the opportunity to discuss a variety of themes and share concerns.

“There was a positive atmosphere and it was a fruitful encounter,” Father Lombardi said Cardinal-designate Parolin told him.

The Vatican Television Center released a brief video montage of moments from the meeting, including a clip in which Kerry told Cardinal-designate Parolin, “Thank you very much for doing this and arranging this on short notice.”

The U.S. secretary of state congratulated him on being named a cardinal by Pope Francis and explained that, after his stop in Rome, he was going to Kuwait for the Syria donor’s conference.

The video montage also shows Nuland saying goodbye to the cardinal-designate and telling him, “Pope Francis is exciting for non-Catholics as well.” Cardinal-designate Parolin replied: “That is good news. Thank you.”

PREVIOUS: Experts at Vatican workshop call for end of weapons flow to Syria

NEXT: On abortion and contraception, Vatican puts words in context