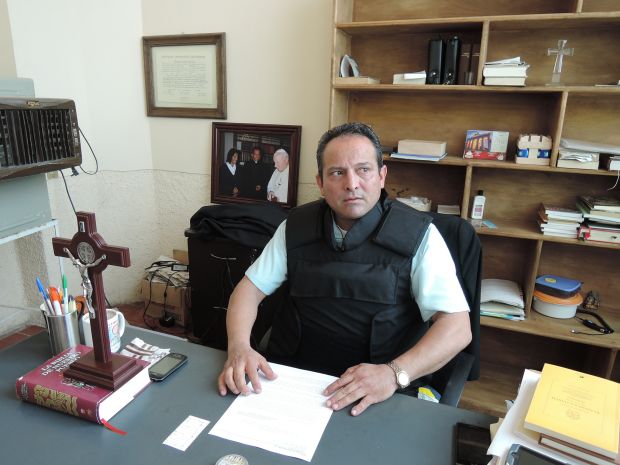 Father Gregorio Lopez Geronimo, vicar of the Diocese of Apatzingan, Mexico, is seen Jan. 16 at his office wearing the bulletproof vest he uses while celebrating Mass. (CNS photo/David Agren)

A bullet hole marks the wall of his office behind Cathedral of the Immaculate Conception in this city of 99,000 residents, where armed self-defense groups have formed to fight back against a drug cartel accused to causing chaos in the western state of Michoacan.

The priest even ordered hundreds of clubs, which he wants a citizen group he’s coordinating to carry in an attempt to take back the streets — peacefully, he insists.

“We’re talking out because someone has to do so,” Father Lopez, the diocesan vicar, said while attending to multiple foreign correspondents in his office, which is adorned by photos of him meeting Blessed John Paul II.

Priests such as Father Lopez have played prominent roles in recent months, offering spiritual, moral and material support for self-defense groups, which have surged in the region around Apatzingan over the past year and taken at least 15 communities under cartel control.

With the media converging on this corner of Michoacan — where the soldiers and federal police were sent to disarm the groups and re-establish order earlier in January — priests such as Father Lopez have prominently been featured in their coverage. Their candor contrasts with other prelates in troubled parts of Mexico, who have preferred to stay silent on the issues of crime and drug cartels.

Father Lopez has participated in protests in Apatzingan, denounced the local police as being in the employ of criminals and highlighted how the cartel carried out crimes such as kidnap, rape and extortion to show that point they collected a portion of the coins paid to use the public toilets.

He also made national news by saying that five gunmen killed by the federal police had plans to assassinate him for his outspokenness. Alejandro Rubido, executive secretary of the National Public Security Information System, denied the allegations.

But such has been the church’s stature in this region of ranches and lemon groves that the comments of priests and a pair of pastoral letters from Apatzingan Bishop Miguel Patino Velazquez — including one calling Michoacan “a failed state” — brought the conflict in Michoacan to the forefront. The federal government, meanwhile, prefers to talk about other topics, such as the economy and structural reforms.

“The only institution they’ve been unable to corrupt is the Catholic Church,” Father Lopez said of the cartel.

A conflict pitting the Catholic Church against a cartel called Knights Templar — named for a Christian military order fighting in the Crusades — was an irony not lost on observers. But the cartel’s name reflects its quasi-religious nature: It teaches from its own version of the Bible, formed a congregation known as “New Harvest” and would previously denounce drug use even as it made methamphetamines in clandestine laboratories.

As the self-defense groups took more towns back from the Knights Templar in recent weeks, photos emerged of captured cartel kingpins in lavish homes and with statues dedicated to “San Nazario,” the fallen crime boss Nazario Moreno Gonzalez, who has been venerated by his henchmen.

“With a Bible in his hand, Nazario Moreno, is killing people,” Father Lopez said, reflecting the widespread suspicion that Moreno was not killed in a firefight with federal forces.

In spite of his comments, Father Lopez insists he is not in the self-defense groups’ camp and calls them, “the best of the bad options we have.”

Other priests in the Diocese of Apatzingan say the that they’ve allowed the groups to ring church bells in times of trouble and brought in food and materials for people in communities coming under siege by Knights Templar foot soldiers. Many also are open in their opinions that the government made a mistake by sending soldiers to disarm the groups — some of which are accused of possibly having ties to rival cartels and appear unwilling to disarm until the government capture Knights Templar’s senior leaders.

PREVIOUS: Pope says judgments on annulments must be impartial and pastoral

NEXT: Eastern Africa bishops appeal for peace in South Sudan